Home Read Albums Of The Week: Dream, Ivory | About A Boy 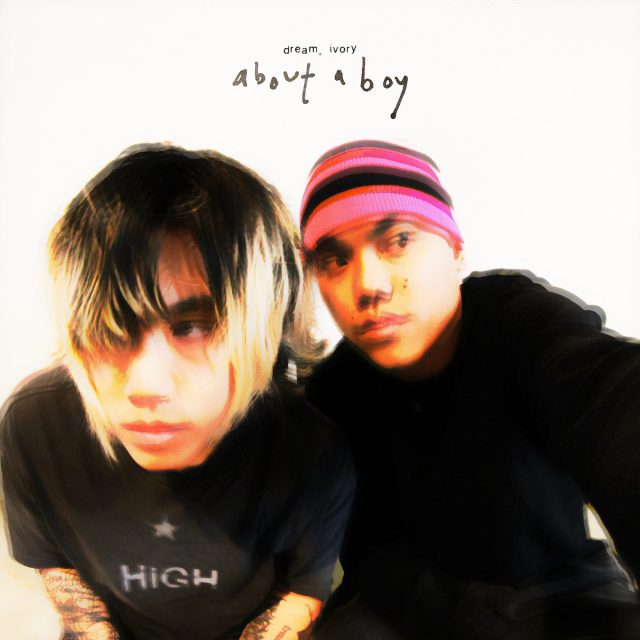 THE EDITED PRESS RELEASE: “Southern California Filipino duo Dream, Ivory — the project of brothers Christian and Louie Baello, ages 24 and 23 respectively — reject convention with a cool confidence, unafraid to push beyond the unpretentious, heartbreak dream-pop that has made them a name online.

On their 2016 EP, the self-titled Dream, Ivory, they were hip-hop heads celebrated for their skilled shoegaze. Now, on their debut full-length About A Boy, they’ve completely reinvented themselves: Turning away from the second-person insecurities of their teenage days to, instead, interrogate their interior selves on their most personal record yet.

Most young bands might be fearful of taking such a courageous leap, especially when their ethereal vocals and guitar distortions have done them well: Welcome And Goodbye, for example, a single Dream, Ivory dropped in March 2018, has amassed over 18 million views. As of April 2022, the single has over 35 million streams, no doubt placing them on the map. Dream, Ivory, it became known, was largely influenced by Beach Fossils’ riffs, Beach House’s synths and pads, and Slowdive’s air-y reverb — sounds they were able to draw from and engineer into a wistful music all their own. Echoes of that early sound remain on About A Boy, but they’re elevated: Referencing everything from The Cure and Garbage to Smash Mouth and Sum 41.

The brothers started Dream, Ivory (named after the color of Louie’s Ibanez bass and Christian’s idea to personify the word Ivory, by adding the Dream verb) in 2016, almost as an accident. “We were making rap songs,” Louie says of their short lived hip-hop project back in 2015 — though they still make rap music in their downtime. “Christian started making beats because I wanted to be a rapper.” Part of that dynamic remains: Christian largely works on production while Louie handles the vocals. Before landing on the shoegaze pop of their Dream, Ivory EP, the two would post guitar covers on YouTube, largely of Panic! At the Disco circa-A Fever You Can’t Sweat Out. Christian handled the editing and production, directing his brother on camera. (Christian has had a lot of success producing under the name Ginseng, working with artists such as Yeat, Rico Nasty, Night Lovell, Lil Tracy and basketball legend Dennis Rodman.)

Children of first-generation American immigrants, the brothers’ interest in music began after their father placed them into piano lessons. “We were forced into music at first,” Louis says, “It seemed like a chore. No one likes learning music theory, you know what I mean?” Then, of course, that disdain grew into an undeniable talent and art appreciation.

“When we were younger, we would listen to everything,” Christian asserts. “Anything from Fall Out Boy to Gorillaz to Starfucker and Chvrches, rap music … ” Louie finishes the sentence with some influences from their dad, “Wings, Eagles, Fleetwood Mac, The Beatles.” Naturally, their music sounds little to nothing like those artists — indicative of who they are as avid music consumers and instrumentalists. “We were born and raised on the Internet,” Louie says. “[We’d] just explore new things every single day.”

About A Boy, Dream, Ivory’s debut full-length album, was recorded largely over FaceTime, Discord, and email — Christian moved to Los Angeles; Louie remains in their suburban hometown of Lake Elsinore — indicative of how they would always work: separate and together, Louie writing a bassline while Christian worked on separate beats — “pretty unconventional,” Louie explains, especially for a family duo. The version you hear is the third iteration of the album; still self-produced by the Baellos at Christian’s house, elevated with mixing by Henry Stoehr of Slow Pulp.

Much has changed for the act in the six years since they started Dream, Ivory. For one, the genre-associations no longer fly. “We used to stick to one sound,” Christian says. “On this album, we’re doing different speeds of songs, upbeats, tempos, guitar tones. We’re diversifying ourselves … I just don’t really like the sub-labels of music, especially nowadays,” he pauses. “The fan base is always like, ‘you’re different than what we thought.’ The stigma of being an indie band is so funny. People expect you to be a certain way.”

“It’s a self-reflective album. It’s about us — about a boy — (based on) whoever is singing,” Christian says, revealing that he also sings on the LP, and for the first time in Dream, Ivory’s history. “Our old songs were about (a) broken heart. This is very vulnerable — straight up, it’s about us.” There’s a second meaning, too. Number (N)ine, the now-shuttered Japanese fashion house, had a grunge-y Americana collection in 2007 titled About A Boy. “The look of that season is the way the album sounds,” he says. The candor is evident: Not only are both brothers singing songs about “self-hate” and “self-love,” as Christian describes it, they’re both heard loud in the mix — a new venture for Dream, Ivory — not because they were afraid to be heard, but because they allow the music to dictate the performance. “I know it’s not good, but I don’t talk to anyone about my problems,” Louie admits. “So, if I’m vulnerable on a song, (it’s because) I want to write it.”

And vulnerable they are, from the Smashing Pumpkins-meets-third wave emo opener Soaking Up the Sickness, an exuberant articulation of a hangover, and their fiction about brothers growing apart (Boyhood) to their frustrated take on an overwhelming relationship (Sensory Overlord, complete with a cathartic “FUCK!” scream from Louie) and the anti-party anthem, with ‘80s synths and pop-punk melodicism (Wake Up!).

Then there’s the clever play on a sugar rush — how giving into your social anxiety and staying home is as sweet as candy and just as unhealthy (Taste Like Candy), their facetious dream-pop dirge (I’m So Emo — “It’s kind of stupid,” Christian laughs,) and their sincereity surrounding mental health and bipolar disorder (Everything Is Something and Nobody Is Nothing, it’s like, ‘What the fuck is he talking about?’” Louie jokes. “Everyone has worth.”)

But for all their laidback, California open-heartedness, there is also incredible sensitivity. Would It Kill You At All is the album’s emotional center, an upbeat electro-pop banger with an intimate message. “I wrote this song about suicide,” Louie says. “I attempted suicide a year ago. That changed the course of my life a lot.” “I sing, ‘To find hope in tragedy / Is to have it your own way,’ [to communicate] how you deal with things in life, those are your consequences and you should deal with that.”

Like everything Dream, Ivory does, it’s in the interest of catharsis. “I wasn’t in a sad place (writing the song) and I’m not in a sad place now,” he explains the distance, wisdom, and growth that makes the track possible. “I was just hyped on the beat. How it gets faster, it sounds like anxiety.”

“We hope people can relate to this record in some way,” Christian says. “And we’re excited for them to hear a new progression of Dream, Ivory.” No doubt, they will.”