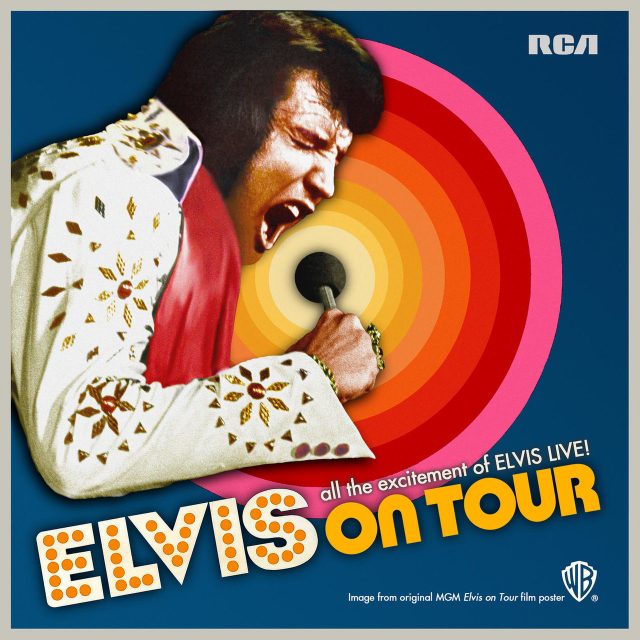 THE EDITED PRESS RELEASE: “As Elvis Presley’s national tour played to sold-out secondary markets across the country in 1972, Elvis was enjoying himself onstage and finding electrifying new ways of connecting to audiences at every show. Working with a band and set lists of his choosing, Elvis was channeling the music he loved most — from pop and gospel and traditional country to blues and rock and contemporary hits — while transforming his own greatest hits with fresh arrangements, turning nostalgia into an unforgettable concert experience packed with immediacy.

Award-winning filmmakers Pierre Adidge and Robert Abel (Mad Dogs & Englishmen) went on the road with Presley and his band with all-access passes, cameras and crew to chronicle the King of rock ’n’ roll at his onstage peak in MGM’s Elvis On Tour documentary film. The film captures Elvis — the human being driving the myth — behind the scenes and backstage with his eyes open and his defenses down. According to the original press release, the Elvis On Tour film “offers the first intimate look at the enigmatic country boy who became the world’s most celebrated musician.” The documentary featured montage sequences supervised by Martin Scorsese. The film was released on Nov. 1, 1972.

Now, 50 years later, the new Elvis On Tour box celebrates Presley’s monumental 1972 concert trek with a multitude of previously unreleased Elvis concert performances and studio rehearsals. The seven-disc set includes six audio CDs and a Blu-ray edition of Elvis On Tour, winner of Best Documentary at the 30th Golden Globes Awards in 1973 and the last feature starring Presley to be released during the artist’s lifetime.

The Elvis On Tour box was produced by Ernst Mikael Jørgensen and mixed by Grammy-winning Memphis producer Matt Ross-Spang. The original recordings were made by Felton Jarvis and Al Pachucki.

Disc 5 features tour rehearsals, recorded live at RCA Recording Studios in Hollywood, on March 30 and 31, 1972. The disc is comprised primarily of previously unreleased tracks in addition to performances previously available on the collector’s releases Elvis On Tour – The Rehearsals (2004) and 6363 Sunset Boulevard (2001) as well as The Great Performances (1990).

Disc 6 completes Elvis’ rehearsals with his band at RCA Recordings Studios with performances recorded March 31, 1972. The disc includes previously unreleased takes on Kris Kristofferson’s For The Good Times as well as performances previously available only on 6363 Sunset Boulevard, Elvis On Tour – The Rehearsals and Amazing Grace (1994).

The set also features an illuminating essay by rock historian/musician Warren Zanes, founding member of The Del Fuegos and professor at New York University. According to Zanes: “The set lists and the performances of the Elvis On Tour period bring a rare thing: A ’50s legend working in the early ’70s who was still taking his audiences to new places … The core band, including Ronnie Tutt, James Burton, Glen D. Hardin, Jerry Scheff, John Wilkinson, Charlie Hodge, The Sweet Inspirations, J.D. Sumner and The Stamps Quartet, and an orchestra led by Joe Guercio, had gotten to a place at which Elvis could inject spontaneity, allowing the arena shows to have a measure of the unexpected … 1972 was a year of 165 performances. In Jorgensen’s words, it was a ‘climax of his career.’ While the ’68 Comeback Special marked the significant point at which Presley returned to live performance, 1972 was the year in which the artist revealed most completely what he wanted to do with the creative energy such a return kicked off.”