Home Read Features Back Stories | My 2011 Interview With Liam Gallagher 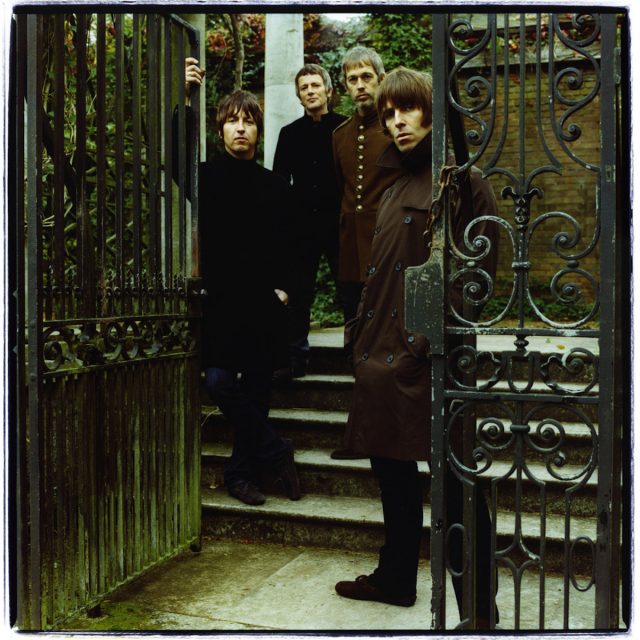 Does it feel like it’s been 10 years since Oasis broke up? Because it has been. Exactly 10 years, as a matter of fact. On Aug. 28, 2009, years of bad blood between battling brothers Liam and Noel Gallagher finally boiled over in a massive backstage row, with the Britrock gods imploding minutes before a gig in France. To mark the occasion, I dug out my 2011 interview with Liam and his Oasis/Beady Eye bandmate Andy Bell. Want the other side of the coin? You can also find my 2008 interview with Noel HERE.

Now that Liam Gallagher is finally free of big brother, he’s in no hurry to find a replacement. Or become one. The former Oasis vocalist insists he’s not the boss of his new band Beady Eye — which is really just his old band without control-freak songwriter and older-sibling guitarist Noel Gallagher.

“I don’t think a band needs a leader,” the singer proclaims from London. “I think it just needs everyone to be on the same page. It can work that way, and it does work that way for us.”

He’s got a point, if their fittingly titled debut Different Gear, Still Speeding is anything to go by. It finds the band — rounded out by Oasis guitarist Gem Archer, bassist Andy Bell (now also playing guitar) and drummer Chris Sharrock, plus a touring bassist and keyboardist — picking up where the Beatlesque Brit-rockers left off in 2009. But they’re also wiping the slate clean: The band refuses to play Oasis songs live, and Liam adamantly rules out a possible reunion.

As Beady Eye’s album arrived in stores, the always-outspoken Gallagher and bandmate Bell got on a speakerphone to discuss new music, old grudges and more:

Liam, you and Noel have had plenty of other fights when one of you has walked away from the band temporarily. At first, did you think this one would blow over too?
Liam: Oh no. I was aware we couldn’t make up after this one. I’d seen it coming; it had been brewing. It was well thought-out by a certain someone. I’m no fool. I knew what was going down.

Was carrying on an immediate decision? How did it happen?
Andy: We all ended up back at the hotel in Paris and had a couple of drinks. Obviously, we were all gutted and a bit shocked. But as time went on, we decided it would be a shame to just leave it and not play together. We thought, ‘We are potentially a great band. Let’s make a new band.’

Were you never tempted to carry on as Oasis?
Andy: Oasis is a band that should have Liam and Noel in it. It would have been wrong. Plus, if we’d have gone out as Oasis, we’d have had to play Oasis songs. It wouldn’t have felt right.

Where did the name Beady Eye come from?
Liam: I thought of it. It’s just, like, a saying in England. There’s no big, deep meaning behind it. I just wrote it down on a piece of paper and thought, ‘That will look pretty cool.’ The name came last. We had the album finished and we were still called Andy, Liam, Gem and Chris. I thought that was a shit name for a band.

Does this feel like a new band as opposed to a continuation of the last one?
Andy: Well, we haven’t changed as people. I guess in a way that’s the meaning of the album title: Different Gear, Still Speeding. It is a different band. It’s a whole new set of songs, a whole new start. But as people, we’re still the same. We’re still motivated by the same kind of music and the same kind of sounds.

Do you feel you have to prove yourselves again?
Liam: Only to ourselves. We know how good we are together as a band. Obviously, we’ve got to go onstage and fucking play well and do great gigs. But that’s just ’cause we want to do that, you know? We’ve just got to prove to ourselves we’re not all talk.

Once you decided to carry on and started rehearsing, how did it go? Was it tough at first?
Liam: We just started demoing these songs and they sounded good the minute we plugged in. We thought, ‘This is it, man. Even if we wanted to have a year off, we felt like there was a higher force saying, ‘Get out there and get on with it. There’s work to be done.’ We knew instantly, man: ‘We’ve got it.’

Was making this easier than making Oasis albums?
Liam: Yeah. Beady Eye don’t think and overanalyse as much as Oasis. We just move along. On Oasis records, there was a lot of, like, just fucking banging your head against the wall when you didn’t need to. With Oasis, it was Noel’s vision. With this, we all wanted to make a great album. Everyone was involved. And there’s not one thing on this record I would have done differently.

Are there things you would have done differently on Oasis albums?
Liam: I’d have liked to sing fucking earlier on in the making of the records. I was always singing at the end, so you’d be waiting about for a lot for people to get off out of the fucking studio, and then you sing. So there was just no vibe. It was like rent-a-singer. This time, I feel like I’m more in the band. The vocals go down earlier. And I think it helps everyone.

It sounds like you’re saying this was a more enjoyable experience than making an Oasis album.
Liam: It was. I’m sorry to say it, but it was, mate. It was mega.

Are you nervous about how the album will be received? You know you’re going to get compared endlessly to Oasis.
Liam: We don’t mind. That’s life. We know we’ve made a great record. Whether it changes peoples’ lives is one thing, but it’s changed our lives because we made it. So if it sells two million copies, 200 million copies or two copies, that’s just something you’ve got to deal with. But that doesn’t mean it’s not a great record. And it’s not going to stop us from making another one.

Andy, is it easier having one Gallagher in the band than two?
Andy: Two Gallaghers was cool. Having one is just as good. However many Gallaghers turn up is fine with me.
Liam: I know what he really wants to say, but he won’t speak up while I’m here. I’ll let you chaps swap numbers and chat later.