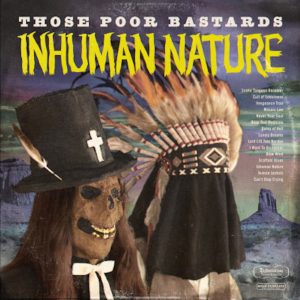 MY ASSESSMENT: People say country music needs three chords and the truth. Well, there’s no doubt this Wisconsin duo — singer-guitarist Lonesome Wyatt and bassist/banjo picker The Minister – know three chords (and probably a few more). But the truth is, their gothic Americana dementia and dusty buzz-fuzz don’t sound like any country music you’re likely to hear in your lifetime. Unless The Residents decide to drink a ton of moonshine and make a concept album about brutality at Sun Studios on Halloween. In other words: It’s about to get weird.

IN THEIR OWN WORDS: “Those Poor Bastards crawl from the muck to deliver their ninth full-length album of lo-fi country doom! Inhuman Nature finds Lonesome Wyatt and The Minister performing an unflinching autopsy into the fathomless evil of the monster called man. Hints of early rock ’n’ roll and punk seep into the murky cracks of their sound to create a sinister hybrid of uneasy listening. Let the suffering begin!” 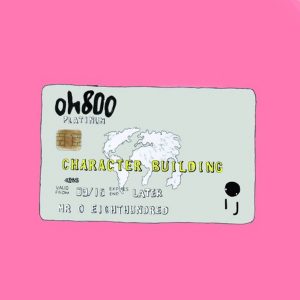 MY ASSESSMENT: This ain’t no party? This ain’t no disco? This ain’t no fooling around? Think again, my friend. The London dance-punk trio — featuring former members of The Duke Spirit, Oh Ruin and Memory Maze — evoke the glory days of Talking Heads with their joyously funky backbeats, slashing guitars, yelpy vocals and sardonic lyrics (plus some howling solos reminiscent of Adrian Belew). Ain’t got no records to play? Start with this one.

IN THEIR OWN WORDS: “The album’s nine tracks are a whip-smart take on modern malaise that is at turns upbeat and funny, sensitive and odd. The band describe it as “a sardonic observation on self-doubt, crap jobs, lame excuses and being a bit of a space cadet”. Kicking off with title track Character Building, the album’s infectious dance-punk sensibilities are apparent from the offset. Filled with clunking cowbells, pulsating beats and bright, jangling guitars, frontman Eoin Rooney’s rages against the nonsense idea that people should work for free if they really want to get somewhere.” 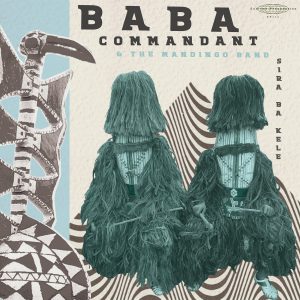 MY ASSESSMENT: Hey, I love Fela Kuti as much as the next old white guy. And yeah, I saw his son Femi once — and it was incredible. Still, I’m a long way from an Afrobeat scholar. But I know one thing: This Burkina Faso outfit cooks. Better still: It’s their own recipe. Their songs boast the unrelentingly propulsive funk grooves and call-and-response vocals you expect, but with more percussion in place of the usual horn section. And they’ve got a heroic guitarist who reminds me of Santana at times. All of which is a long way to say that if you’re going to hit play, be prepared to get down hard for the next 45 minutes.

IN THEIR OWN WORDS: “After the Afrobeat fury of their first album Juguya, the band has now distilled a potent mix of traditional and modern Burkinabe funk with a reverent take on the iconic Mandingue guitar music of the 1970s. Mamadou Sanou (Baba Commandant) leads the band with a confidence earned from years of toiling in the DIY underground of the West African music scene. His riveting growl and main instrument, the Doso Ngoni, still strike with a profound delivery. The band’s guitarist, Issouf Diabate, is on board again and his breathtaking guitar work is one of the greatest examples of the instrument displayed in modern times. Massibo Taragna (bass) and Mohamed Sana (drums) are simply one of the finest rhythm sections working today, each a master on his instrument and the chops displayed here are truly something to behold. The band has become an interlocking five-headed hydra of complex funk and cosmic guitar explosions.”