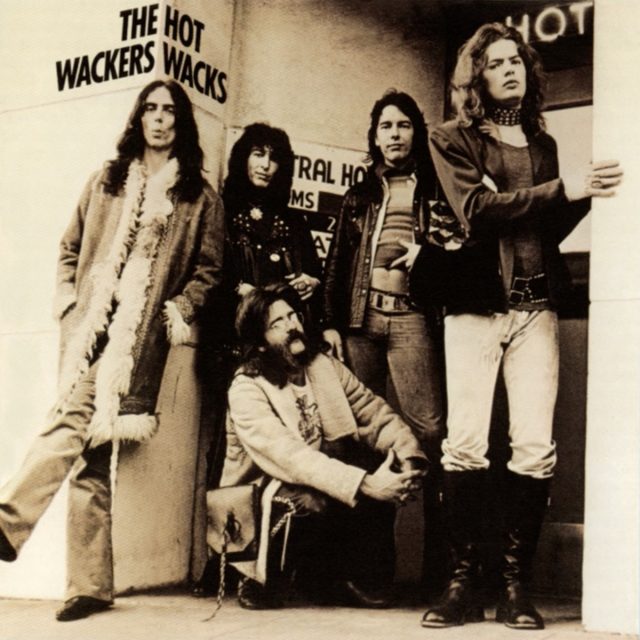 I love buying records I know nothing about, especially when they’re dirt cheap. Recently I acquired the sophomore album by The Wackers for $5. 1972’s Hot Wacks was recorded in Montreal after the band relocated there from California. The first album, Wackering Heights, came out in 1971.

I’d never heard or even heard of them before, but this album is an astounding piece of progressive alt-pop, in a similar vein to Big Star or R. Stevie Moore. This record could have come out this year, and I’m certain Spotify would have assaulted me with it at every algorithmic opportunity.

The leader and principal songwriter is Bob Segarini, who shares vocals and guitars with the other songwriter Randy Bishop. Hot Wacks was intended to be more like the band’s live sound, more electric. It was almost entirely done at Andre Perry’s precursor to the famous Morin Heights Le Studio, his downtown Le Studio in a former church at 1135 Amherst Square. It boasted two imported 16-track recorders, synched to provide state-of-the-art 32-track recording — across the street from a morgue. Two engineers would go in at 5 a.m. every day and spend up to eight hours synching the two machines by hand before sessions began.

Referring to Montreal as “our Hamburg,” after cutting the album, Bob and The Wackers went back to California. But they were so loved in Montreal for their live act that they returned to the city to stay by the time they released their third and final album. Segarini now calls Toronto home. So, let’s dive into Hot Wacks:

Side 1 kicks off with the great I Hardly Know Her Name, with its Hüsker Dü-like verses, minus the distortion. There’s a clever beat change-up for the chorus. The care put into vari-speed drum compression is obvious and really effective on the fills. Next up is We Can Be, which eases in — kind of falls together in bits before the tight, compressed drums lay down a beat and a cool, fuzz drop-D guitar hook. It’s impossible not to make Big Star comparisons here, though the “flying” lyrics are more than a bit dated. There’s an undeniable gift for vocal and guitar melodies.

The third track is a surprising cover of John Lennon’s Oh My Love, from Imagine. The production value on this one is quite different. much warmer and fuller. It was the only song done at a different studio, in San Francisco. Excellent bass performance and what actually sounds like a Lennon song with a Wings arrangement.

If this album is being compared with Number 1 Record by Big Star, then the next song is the equivalent to In The Street. The fuzzy riff-rocker Wait And See is the kind of cool early ’70s glam perfection you get from Hi Hi Hi or early KISS. The vocals for this track were also recorded in San Francisco. The last song on the first side threatens to be a sort-of Seals & Crofts ballad, but thankfully never commits to that demise and becomes rather Bowie-esque. Do You Know The Reason shifts away from the mild harmonies and sparse arrangement around 45 seconds in and only does it once more, opting instead for repeats of the chorus and some infectious drum fills — the kind that make me want to jam.

Side 2 opens with a jaunty Stampeders-type pop song, which really won my heart with its second chorus — with hits on every beat before breaking down into a very inspired harmony vocal transition which it repeats like a post-chorus. It’s seriously advanced pop songwriting, with the chops to pull it off. Time Will Carry On is next — the suite of songs begins with a gentle, descending guitar and vocal intro which blossoms into a gorgeous three-part harmony. This song is kind of the centrepiece of the album, repeated in a pseudo reprise at the end. After the second chorus, the lead vocalist changes as it slips into Maybe Tomorrow. It’s very, very likeable and immediately infectious. I’m sure there were comparisons to the Abbey Road medley. This band never overdoes anything, but also never chickens out.

From Maybe Tomorrow, the suite shifts into the title track Hot Wacks, basically unnoticeably unless you’re listening on Spotify. There are flat-out sick delay guitar overdubs on this. It again shifts seamlessly into the next section of the suite, Anytime/Anyday. The last bit of this short section has the most unabashedly Abbey Road bit — a characteristic walkdown like the one in Carry That Weight. Then it’s the longest part of the suite — Find Your Own Way, which would be a Paul McCartney concert staple, you’d think. It’s a mix of Back Seat Of My Car, 1921/Christmas from The Who’s Tommy and R. Stevie Moore. It all wraps with Time Will Carry On (It Won’t) — the reprise of how the suite began.

This album deserves more attention. It deserves a half-speed remaster on 180g vinyl. It’s an absolute pop masterpiece. An easy 4/5.