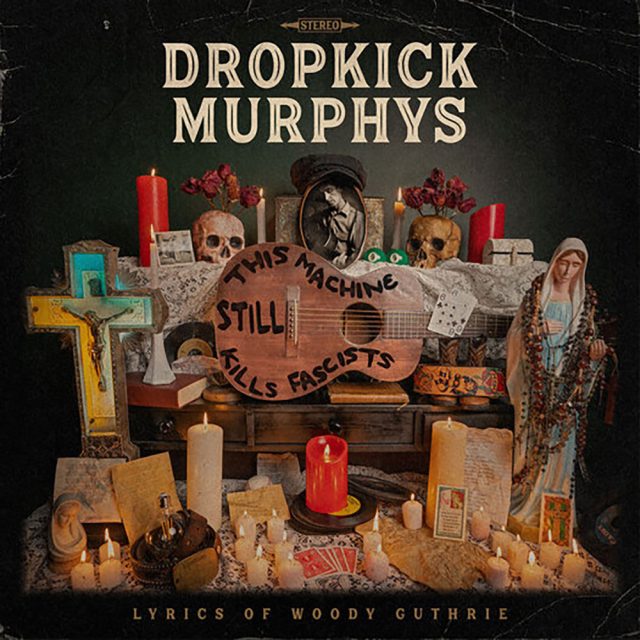 THE EDITED PRESS RELEASE: “Some songs are timeless. We can all think of songs that fit every era, every life event. Tearjerkers and kids’ songs, thought provokers and rally cries. But what about lyrics that were written about the people and issues of the author’s time — then put away, never to be seen until almost a century later, when a band pulled them out of the archive and were floored by how vividly those lyrics describe the news of their day?

There’s an answer to that question — and it’s contained on This Machine Still Kills Fascists. In the 10 songs that make up this album, Dropkick Murphys turn Woody Guthrie’s perennial jabs at life — many of which are from the 1940s and ’50s — into the time of their lives. The resulting music is eerily relevant to today’s world. And they’ve done it all without their usual arsenal of electric guitars. In fact, not a single amplifier was used to animate Woody’s words in these songs. But make no mistake: this is NOT your grandfather’s folk album. DKM harnessed all of their trademark power to craft these songs and bring Woody’s lyrics to life.

Guthrie wrote songs from the heart and for the common person. He made a point of showing up when it counted most, often performing at fundraisers, benefits, and rallies to champion working class causes and condemn greed, war, and unchecked capitalism — all with his guitar in hand. This is where Guthrie and the Murphys intersect. The band’s ethos of family, community, service, and action depends upon honest reporting in their music. Like Woody, showing up in real life is what makes their songs so impactful. They just are who they say they are. Whether it’s standing up to Nazi thugs or standing with working men and women on a picket line, showing up is what holds the center in DKM’s world.

As Woody once said: “A folk song is what’s wrong and how to fix it, or it could be who’s hungry and where their mouth is, or who’s out of work and where the job is, or who’s broke and where the money is, or who’s carrying a gun and where the peace is.” In both song and deed, Dropkick Murphys have always held true to this same view. That’s no coincidence, explains Murphys founder Ken Casey: “Woody Guthrie, he’s the original punk. He went against the grain, he fought the good fight, he spoke up and sang about his beliefs. I’m motivated by reading what he wrote and am inspired by his courage. One man and a guitar — it’s powerful stuff.” 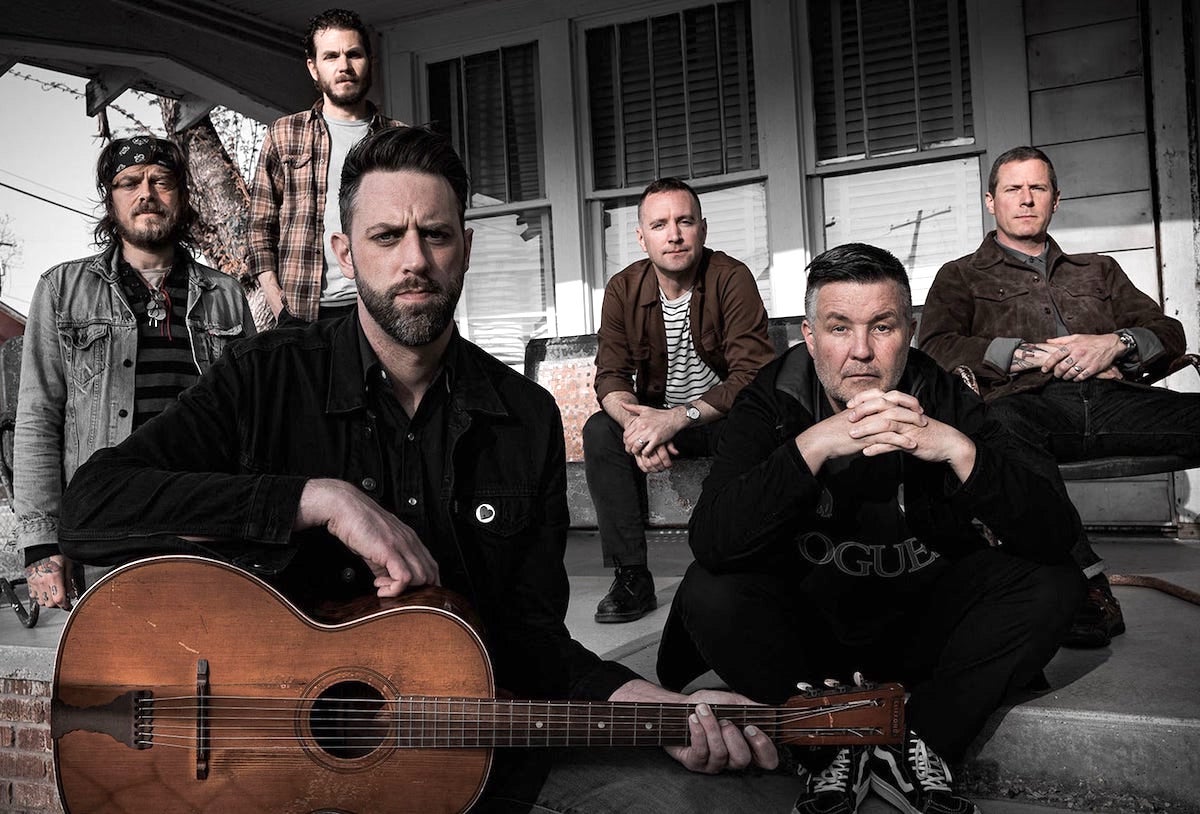 The album title itself pays homage to the powerful message Guthrie began painting on his guitars in the early 1940s, in the midst of the Second World War: “This Machine Kills Fascists.” A man and a credo laid bare on the face of his guitar. This Machine Still Kills Fascists isn’t an acoustic folk departure for Dropkick Murphys — it’s a continuation of their journey with Guthrie, which began nearly two decades ago when DKM covered Woody’s Gonna Be A Blackout Tonight on their 2003 album Blackout. The journey reached new heights a few years later when Casey discovered a few scribbled lines about Boston in the WG archive. The band painted Woody’s lyrics about their hometown into a vicious punk missive called I’m Shipping Up To Boston, and put the song on their 2005 album The Warrior’s Code. Shortly after, The Band founder Robbie Robertson, discovered the song and placed it into a pivotal scene of Martin Scorsese’s 2007 Oscar-winning film The Departed. Since then I’m Shipping Up To Boston has become a signature song and rallying cry.

For those two songs, Dropkick Murphys pulled Guthrie’s lyrics into their musical world, giving them the DKM treatment through and through. For this album — created from a larger body of Woody’s mostly unpublished works — they knew they needed to enter Woody’s musical world, an altogether new challenge for a band whose raw power had relied on searing electric guitars.

DKM’s Tim Brennan explained, “In the beginning of this it felt nice to know that the lyrics were already written. I think we figured that it might be easier to tackle, but it’s been pretty difficult … in a good way.” And Matt Kelly summarizes, “I think that a big part of this album is stepping outside our comfort zone and not writing what would be typical Dropkick Murphys music. The challenge was coming up with a way of writing music to the lyrics that would do the guy proud.”

The idea for this album has been percolating between Woody’s daughter Nora Guthrie and the band for more than a decade, with Nora curating a collection of her father’s never-published lyrics for the band over the years. The challenge was always finding the right time to pull it together. When the band’s co-lead vocalist Al Barr was sidelined in the latter half of 2021 — taking a leave of absence from the band to care for his ailing mother — Dropkick Murphys were apprehensive about making a normal album. The perfect time to take on the Woody project had presented itself, and the band leapt at the chance to bring more of Woody’s timeless lyrics to life with a Dropkick Murphys musical twist. The end result is This Machine Still Kills Fascists — the true fruition of like-minded rebellious artists collaborating — albeit nearly a century apart. 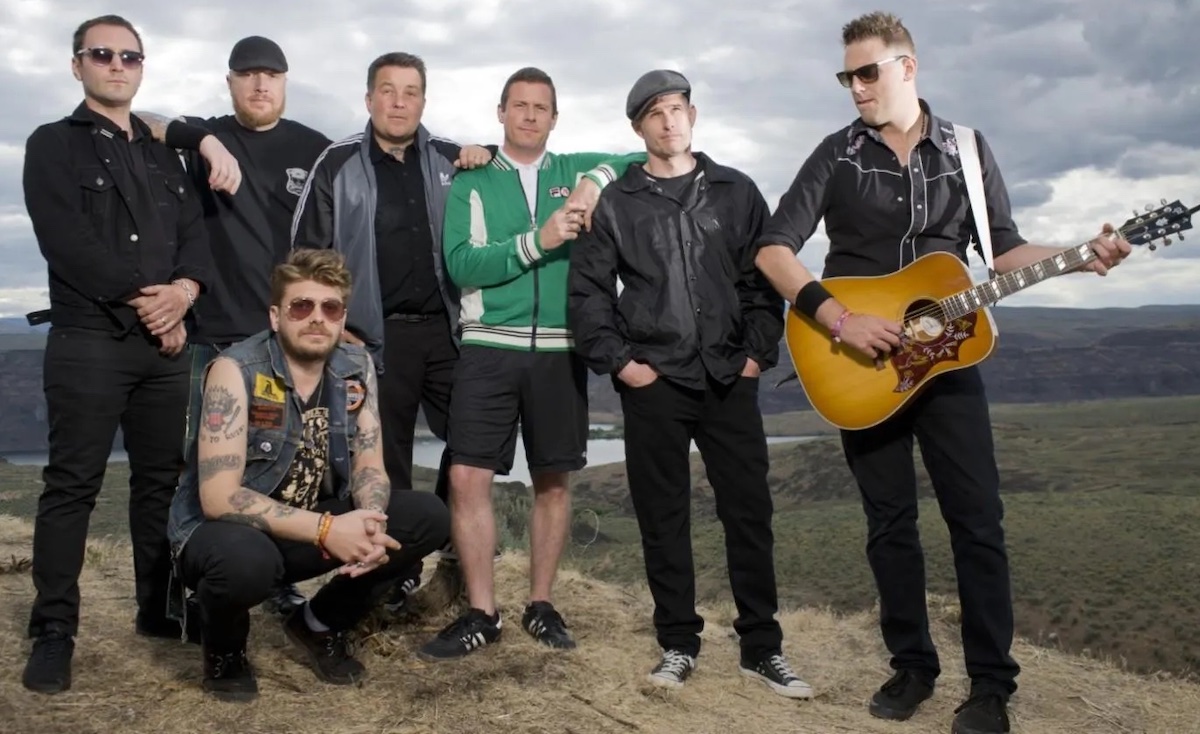 Nora Guthrie explained, “I collected lyrics on all kinds of topics…lyrics that seemed to be needed to be said — or screamed — today. Ken Casey is a master at understanding Woody’s lyrics, which can be complicated, long, deadly serious, or totally ridiculous. DKM is capable of delivering them all.”

Dropkick Murphys and their longtime producer Ted Hutt aptly recorded at The Church Studio in Tulsa (just a few minutes from Woody’s birthplace, and the modern-day Woody Guthrie Center). The historic studio was founded by Leon Russell and was the original location of legendary Shelter Records. Nora Guthrie and her daughter Anna Canoni were very much a part of the album every step of the way and personally curated Woody’s lyrics for the band to turn his words into songs. Ultimately, Dropkick Murphys had so much material based on Woody’s poignant lyrics that they recorded two albums, with Vol. 2 scheduled for release in 2023. During the album sessions, Dropkick Murphys made a point to visit Woody’s hometown of Okemah and walk the same streets Woody walked. Retreating to Woody’s home state of Oklahoma to record the album had a powerful effect on the band and the creative process behind these songs.

Theselyrics have been sitting for well over half a century. Through every iteration of technology, every iteration of modern convenience, through life and death and war and so-called world peace. All those global changes have happened, sure, but, inexplicably, Woody’s words describe the here and now in our communities — and in our world — better than anybody who is currently standing here, breathing, typing into their high-tech device. This man sat in a chair, tapped things out on a typewriter, or wrote things out by hand. He wrote because, as we noted earlier, “A folk song is what’s wrong and how to fix it.” The man took responsibility for coming up with a solution as much as he did identifying the problem.”

Dropkick Murphys’ own catalog is filled with anthems that celebrate the resilience of heroes and antiheroes alike. Songs of mourning, and songs that ease that burden through the collective sharing of loss. Songs that walk that path of righteous indignation and determined defiance that Woody trod over more than half a century ago. On This Machine Still Kills Fascists, they do that legacy proud.

Nora Guthrie summarizes, “Today, things need to be said front and center, loud and clear. No time for subtleties, no time for whispered words or guarded statements. When you need a megaphone to say what you mean, and mean what you say, call Dropkick Murphys. I did.”