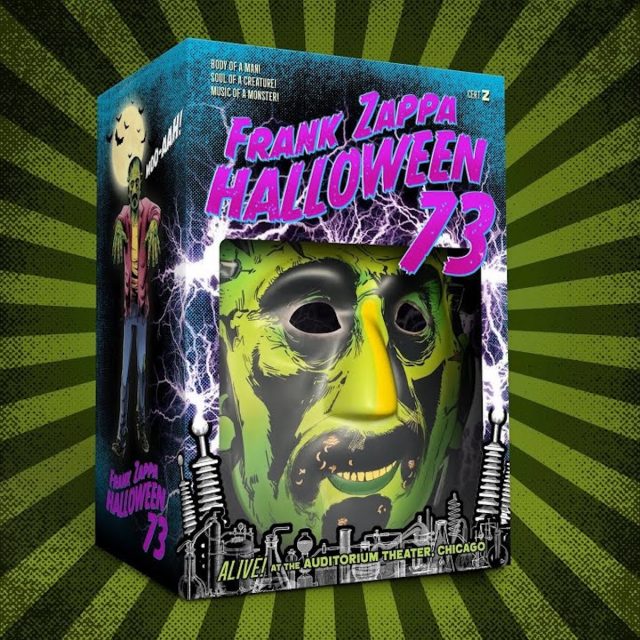 WHO IS HE? The late, great musical icon and iconoclast. The father of the Mothers of Invention. The childhood pal of Captain Beefheart. The owner-operator of the most recognizable moustache in music. The chart-topping brains behind the Top 40 hit Valley Girl. The man who took on the PMRC. And most importantly, the sardonic singer-guitarist, classical composer and ultra-prolific producer who released 62 albums in his lifetime (and left an archive that has spawned over 50 posthumous releases so far).

WHAT IS THIS? The latest in a continuing series of posthumous treats presented by Zappa’s family-run trust: A four-disc box set documenting two previously unreleased All Hallows performances in Chicago, along with an entire disc of freewheeling rehearsals and a Zappa Halloween mask for your own personal mischief-making. If the whole concept sounds familiar, that’s probably because the Halloween ’73 set is also something of a sequel to the Halloween ’77 box that arrived two years ago.

WHAT DOES IT SOUND LIKE? Actually, a lot like 1974’s Roxy and Elsewhere double-live set — or to be more specific, the more complete 2018 box Roxy Performances. This should come as no big surprise, since these shows took place little more than a month before the Roxy gigs, so the bulk of the band is identical and portions of the set lists are noticeably similar. Not that I’m complaining. Nor should you. As always, the playing is superb, the set lists are killer, Zappa’s guitar playing will kill your mama and his between-song patter is dry and wry.

WHAT SHOULD IT BE TITLED? Trick or Treat, Smell Frank’s Feat.

HOW SHOULD I LISTEN TO IT? While wearing the mask and doling out candy to the roving neighbourhood urchins on the big night, of course.

WHAT ARE THE BEST SONGS? Well, it’s hard to dislike new live versions of Cheepnis, I’m the Slime, Montana and Cosmik Debris, not to mention the timely Dickie’s Such an Asshole.

WHAT WILL MY FRIENDS SAY? ‘This beats any Halloween party I’ve ever been to.’

HOW OFTEN WILL I LISTEN TO THIS? Zappa made Halloween gigs an annual tradition. I see no reason why you can’t do the same.

IF THIS ALBUM WERE ACTUAL CANDY, WHAT WOULD IT BE? A fake can of peanut brittle with springy snakes inside.

SHOULD I BUY, STREAM OR STEAL IT? Think of it as candy for grownups — and it won’t give you cavities or leave your hands all sticky.