Home Read The Aristocrats | You Know What…? 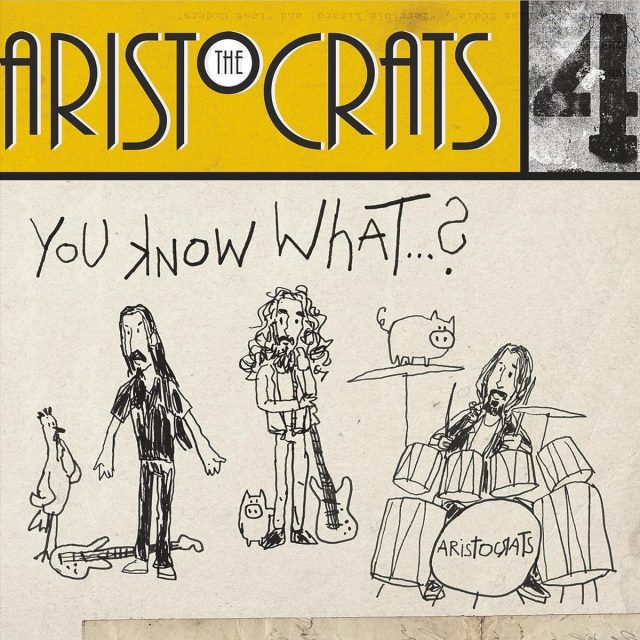 WHO ARE THEY? A prog-rock power trio and sorta-supergroup featuring high-calibre hired guns who record and tour with the likes of Joe Satriani, Steven Wilson, Steve Vai and Dweezil Zappa.

WHAT IS THIS? The fourth studio set of blazing instrumental virtuosity and unbridled musical creativity from a band that’s no joke — despite being named after an infamously filthy gag.

WHAT DOES IT SOUND LIKE? More listenable than you might anticipate. Sure, guitarist Guthrie Govan, bassist Bryan Beller and drummer Marco Minnemann — his names really should start with D, but what the hell — can play a bajilion notes a second in 17/8 time. But they can also write strong hooks, catchy melodies and memorable songs in an impressive array of genres and styles. And in keeping with their handle, they inject a fair amount of humour into the proceedings. And not just in the form of titles like D-Grade F*ck Movie Jam. Though that works too.

HOW SHOULD I LISTEN TO IT? While practising your scales and/or rudiments.

WHAT ARE THE BEST SONGS? The Flamenco-tinged Spanish Eddie, the metallic Terrible Lizard and the countrified twang-rock of When We All Come Together have extra helpings of personality.

WHAT WILL MY FRIENDS AND FAMILY SAY? ‘For a band without a singer, they sure have a lot to say.’

HOW OFTEN WILL I LISTEN TO THIS? Whenever you want to great musicians who aren’t complete wankers.

IF THESE GUYS HAD OTHER JOBS, WHAT WOULD THEY BE? University professors who moonlighted as standup comics.

SHOULD I BUY, STREAM OR STEAL? If you’re not an instrumental music fan, the stream might be all you need.