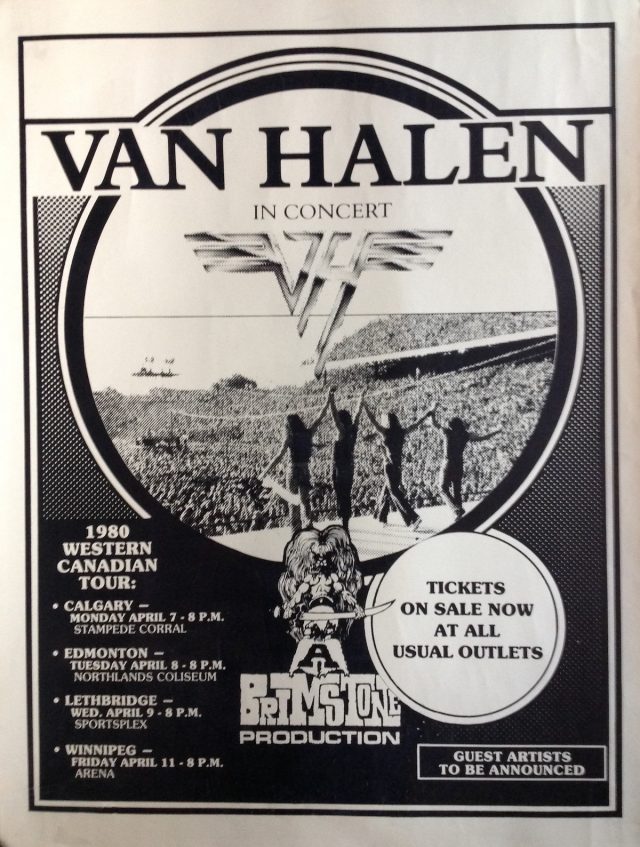 When I came across this ancient Van Halen tour poster recently, I was a little confused at first: I distinctly remember seeing them in Winnipeg around this time, but at the downtown Convention Centre, not the Arena. Turns out the show I was at actually took place in September 1979, about six months earlier. It was their first visit to the city. Good thing I still had the ticket stub to jog my memory. Not that it needed that much prompting: I recall it being an awesome show, with the original band at the height of their groundbreaking powers. David Lee Roth was swaggering around barechested and doing leaping splits off the drum riser (more importantly, he could still hit all the notes). Eddie Van Halen was tossing off those jaw-dropping solos like nothing, making every guitarist green with envy. His brother Alex was manhandling the kit like a thug. Bassist Michael Anthony was nailing all those high harmonies. Everybody was swilling Jack Daniel’s straight from the bottle like it was iced tea (hey, who knows; maybe it really was). And for my money, you can’t really top a set list built almost entirely from their first two albums. Best of all, I recall being right up front for the whole insane affair. All in all, pretty hard to beat. Maybe that’s why I sincerely can’t recall if I was at this arena show the following year, though I’m sure it was every bit as amazing — if just slightly less intimate. Anyway, if you were there and would like a memento (or even if you’re just interested in owning this incredibly rare poster), email me. I’d love to see it go to a good home.

UPDATE: This poster has been sold.