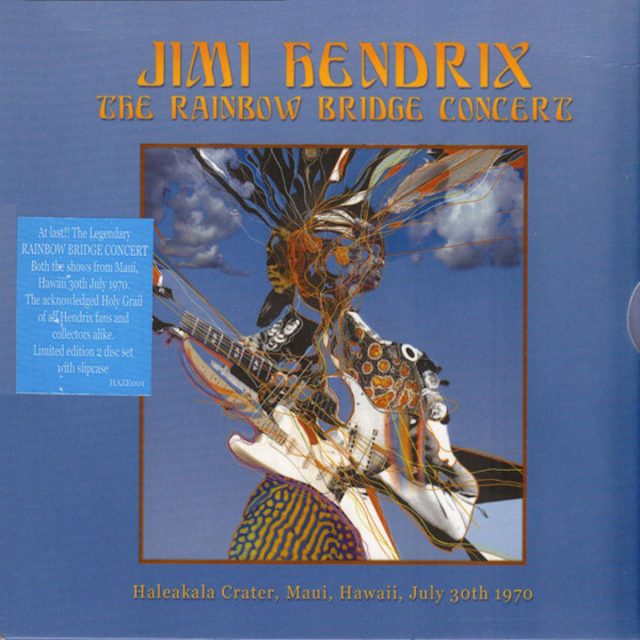 No, you aren’t having an acid flashback — Rainbow Bridge was a live Jimi Hendrix album and movie soundtrack put out in 1971.

But that version, by numerous accounts, was a slipshod affair that was hastily assembled, sloppily edited and poorly produced. Not to mention incomplete — cuts that were left off the original have popped up on bootlegs and official releases for decades. Here, now, we are told, is the definitive Rainbow Bridge: A two-disc set with 16 songs performed by Hendrix, drummer Mitch Mitchell and bassist Billy Cox in a dormant Hawaiian volcano just weeks before the guitarist’s death. Well, I can’t tell you it’s the final word on the gig — I’ve seen tunes on bootlegs that don’t seem to be here — but I can see what all the fuss was about. Hendrix live gigs don’t come much better than this: The sound is decent, the band is loose and in the groove, and the guitarist is on fire, constructing temples of feedback, abusing his whammy bar and effortlessly tossing off a string of incredible solos during a set that features both familiar hits like Voodoo Chile, Foxy Lady, Fire and Purple Haze, along with lesser-known fare like Hey Baby (New Rising Sun) and In From the Storm. Definitive or not, it’s definitely worthy. NOTE: This version isn’t available on Spotify, but for some reason the old, inferior one is. Go figure.