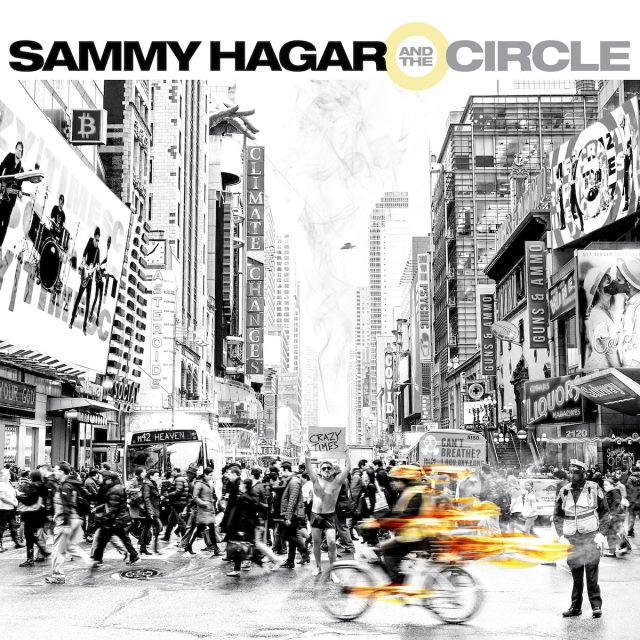 THE EDITED PRESS RELEASE: “Just shy of his 75th birthday, Sammy Hagar is just as energized by and committed to the pure power of rock ’n’ roll as he was while fronting Montrose in the 1970s and Van Halen from 1985-1996. Indeed, the Rock And Roll Hall Of Famer has conjured the very best of his career on his 27th studio album Crazy Times, which finds him backed by his band The Circle: bassist, former Van Halen bandmate and fellow Rock Hall member Michael Anthony, guitarist Vic Johnson and drummer Jason Bonham, all of whom remain at the peak of their collective games.

It would be easy for Hagar to rest on his considerable laurels at this stage of his life or just kick up his feet on the beach at his famed Cabo Wabo Cantina in Mexico. But try as he might, he still can’t resist making music with the guys he loves. Enter producer Dave Cobb, who has won eight Grammys working with artists such as Chris Stapleton and Brandi Carlile, and grew up obsessively listening to Hagar in all his many projects. After being introduced a couple years ago, the pair initially discussed making more of an Americana-leaning album with acoustic instruments, but Cobb instead suggested bringing The Circle to Nashville’s RCA Studio A to make what he hoped would turn into “the definitive Sammy Hagar record” — one that rattles the speakers and encourages fist-pumping of the highest order.

Crazy Times is the followup to The Circle’s lauded 2019 debut Space Between, a multi-category No. 1 album on the Billboard charts. Hagar says, “Dave was looking to pull in all the elements so that when you hear this record, you’re gonna shout, ‘Oh, hell yeah! This sounds like Montrose meets Van Halen meets Led Zeppelin!’ We cut everything live, but it wasn’t until we got into the studio that Dave would get in Jason’s face and say, ‘Come on! Give me your favorite lick your dad ever did for this drum fill. And then, take it beyond that and go crazy.’ He knew what buttons to push to get Jason to do what he wanted, and he wanted John Bonham’s Led Zeppelin drums.”

Cobb also craved Anthony’s classic Van Halen backing vocals, with Hagar going as far to call the band’s longtime producer Ted Templeman for tips on how to properly capture them (the secret involved a particular type of double-tracking, rather than any kind of special microphone). And when it was time for Hagar to track his own lead vocals, Cobb would yell, “You’re holding back! Be hungry like Montrose! Give me that scream from Bad Motor Scooter or Space Station No. 5.”

“I think this is what made me want to really give it up vocally,” Hagar continues. “I wanted to impress Dave, because he had some high standards about what I was going to bring. I’m thinking, ‘Jeez, I hope I’ve still got it’ (laughs). It really motivated me. At my age, I’m easy to make cry and laugh. I feel everything, man. When I’m around people that contribute to that, I’ve still got plenty of energy, enthusiasm and creativity left in my body.”

Indeed, with Cobb’s enthusiasm meter “on 10,” according to Hagar, the sessions flew by in a joyous rush of adrenaline and volume, and the musicians co-wrote three additional songs beyond the six Hagar had brought in. Cobb also played rhythm guitar on every song and encouraged The Circle to include a cover of Elvis Costello and the Attractions’ 1978 classic Pump It Up, which the band often play for fun backstage before concerts but had never tried in the studio.

“Dave said, ‘You don’t know how fun this is for me, playing with my heroes.’ He made us feel so proud about everything we’d ever done, collectively and individually,” Hagar enthuses. “I’d be like, ‘Well, I’ve played that lick before,’ or ‘I’ve used that word before.’ He’d say, ‘So fucking what! It’s awesome!’ We were done so fast because we played it as a whole band, and this band is so fucking good. There were basically no overdubs except for Vic’s solos, but even some of those were cut live in the room.”

Crazy Times was recorded in fall 2021 “when the world was starting to come out of the pandemic bubble we’d all been living in,” Hagar says. The freedom to be back in a room rocking out with friends “felt unbelievable, but a little uncertain, too. There was joy in the hard work, catharsis and the camaraderie we’d craved. It was like those two years of not being able to do very much fell away and we really all came together and let it out in the music and lyrics. We were able to express what we felt.”

For Hagar, that meant not sugarcoating his feelings on the state of the world (Slow Drain, the title track), the disease of apathy and inaction (the thumping, made-to-be-played-loud Feed Your Head), or reminiscing about the ups-and-downs of a life well lived (the acoustic guitar-driven Be Still, Father Time). Hagar wrote the latter song on acoustic guitar when he turned 70, and captured a rough take of it on his iPhone (“the only other person who heard it before Dave was John Mellencamp, and he told me, ‘that song’s got soul!’). Hagar intended to present it in that stripped-down style as a possible album closer, but as he did throughout the Crazy Times sessions, Cobb had other ideas.

“Dave said he wanted to make a rock ballad out of it and told Jason to give him a Springsteen groove,” Hagar says. “Man, my fur went up when I started singing that song. That’s a live vocal. I’ve never sang better in my life and I don’t think I’ve ever written a better song in my life. Dave’s the one that made it what it is. Otherwise, it would have been a quiet little track that maybe the world would never hear. Now, I want the whole world to hear it.”

In the end, Hagar and company wound up with something of a concept record about these past two utterly unique years and their lives during them. “In my lifetime, this is the first time we all went through something this major together,” Hagar says. “We all had to share in it and make it through to the other side. I think if you listen to this album from beginning to end, it will inspire you to learn how to live in these crazy times. It’s a manual.”