Sir Will is ready to pump you up. The Compton-bred, Phoenix-based rapper’s latest single Weight Up is a hip-hop anthem dedicated to investing in yourself, putting in the work and celebrating the results — presented in Sir Will‘s signature charismatic feel-good flow. “The term Weight Up stands for whatever you’re doing in life,” Sir Will explains. “You can always do it better and go harder.” To prove his point, Sir Will went above and beyond the call in this interview, responding to every one of my dumb questions. He put in the work; now you can celebrate the results:

Introduce yourself: Name, age (feel free to lie), home base and any other details you’d care to share — height / weight / identifying marks / astrology sign / your choice.
Sir Will, from Compton, Calif., residing in Arizona currently, 5’8″, mole on left side of my forehead, and I’m a Taurus

What is your musical origin story?
Growing up in Compton, when I was 8 years old, DJ Quik performed at a block party in front of my house. Seeing someone move a crowd like that made me start writing rhymes the very next day.

What’s your latest project?
My latest single is called Weight Up, which is produced by West Coast legend Rhythm D & Billboard-charting producer Bobby Keyz from The LoopHoles, along with record executive Antonio Reid Jr.

What truly sets you apart from other artists?
My clarity and energy. You’re going to hear clearly every word I say. This is missing a lot in hip-hop currently. And every time you hear me rap, you’re going to feel my energy and authenticity.

How will my life improve by listening to your music?
You’re going to hear a story you haven’t heard from a hip-hop artist before. You’ve heard the rags-to-riches by coming from nothing and making millions in hip-hop. But in my story, I came from rags, went to the corporate world, worked long and hard, and then took that and invested it into my music career. Knowing that back story allows people to be more personal with my music. My songs will make fans feel motivated, make them dance, make them think about life all together.

Tell us about the first song you wrote and / or the first gig you played.
First song I wrote was called Little Most Wanted. I was 12 years old and I went by T-Money back then lol. I thought it was the best song ever. But funny enough, I performed it at my talent show in middle school and won first place. I was the only one performing an original song. I would count that as my first gig also. I won $100.

What is the best / worst / strangest / most memorable performance you have given?
When I was doing mortgages, my company held a talent show for $10,000. I would say that was my best performance because the whole company was screaming my name. That felt amazing. Worst was when I opened for G-Unit. It wasn’t that I did bad. But it was the fact that they had my music really low when I performed so people couldn’t hear me that well. When G-Unit came on the music started blasting. That’s when I understood the difference between an opener and headliner, and having your own team and sound person. Haha

What is the best / worst / strangest / most memorable performance you’ve seen?
Best performance of course was DJ Quik performing in front of my house at that block party. He had the whole block jumping. The worst — I won’t say the artist’s name, but it was at a Summer Jam in California. And this artist only had one good song. While they performed all the other songs that no one liked, the crowd got bored and aggravated, and a riot started in the crowd. That day I told myself I would always give my all on every performance.

What living or dead artists would you like to collaborate with?
That’s easy: 2pac. I would have loved just to feel his energy and see his writing process.

What artist or style of music do you love that would surprise people?
One of my favorite songs of all time is Tim McGraw’s Don’t Take The Girl. I know every single word, I love his storytelling. I also love Kenny Chesney‘s When The sun Goes Down. My next-door neighbor didn’t have cable, so she would come to our house when the country music awards would be on to watch it. I picked up some of those great country songs from her.

What words do you hope people use when they describe you?
Always smiling, energetic & authentic. I want people to feel nothing but positive vibes around me.

What useful (or useless) skills do you have outside of music?
Useful skill is having a mortgage background. I can tell you what a good or bad loan looks like. I can also tell you when to buy a house and when to wait. Financial strategy is another, and I’m great at public speaking. I can sell anything. Useless skill would be reciting movies. People hate when you’re repeating all the words during a movie. Haha!

Who can you do an impression of?
My dad. Since we look so much alike, I can do his walk and I can sound like him. For celebrities, I think I make a good impression of them until my friends tell me I suck. Haha.

Tell us a joke.
Yo mama so big she used to play pool with the planets. I stole that joke, but it’s still funny to me.

What do you collect?
Sneakers. I have a room in my house that’s just for my sneakers. It looks like a small foot locker.

If money was no object, where would you live?
Miami. I would also need to have a home in L.A. so I can leave during hurricane season. I’m very scared of those.

What would you like to be reincarnated as?
An eagle. I would fly around wherever I want to. Nothing else in the air would mess with me, ever.

Which historical event do you wish you had witnessed?
MLK March on Washington. I would have loved to march with MLK.

What’s your idea of perfect happiness / total misery?
Total happiness is having all my family around for food and fun. Knowing all my family is safe and just having nothing but laughs and jokes because this is what we do when we’re all together. Total misery is having no one around. Living life with no family to spend time with. That sounds horrible.

What are your pet peeves?
Arrogance. Someone who carries themself like they’re just better than others. I hate being around energy like that.

What’s your greatest regret?
Not spending more time with my grandma before she passed away.

What would the title of your autobiography be?
The Power of a Smile.

Who should play you in the movie of your life?
Jacob Latimore from The Chi. He looks like we could be family. 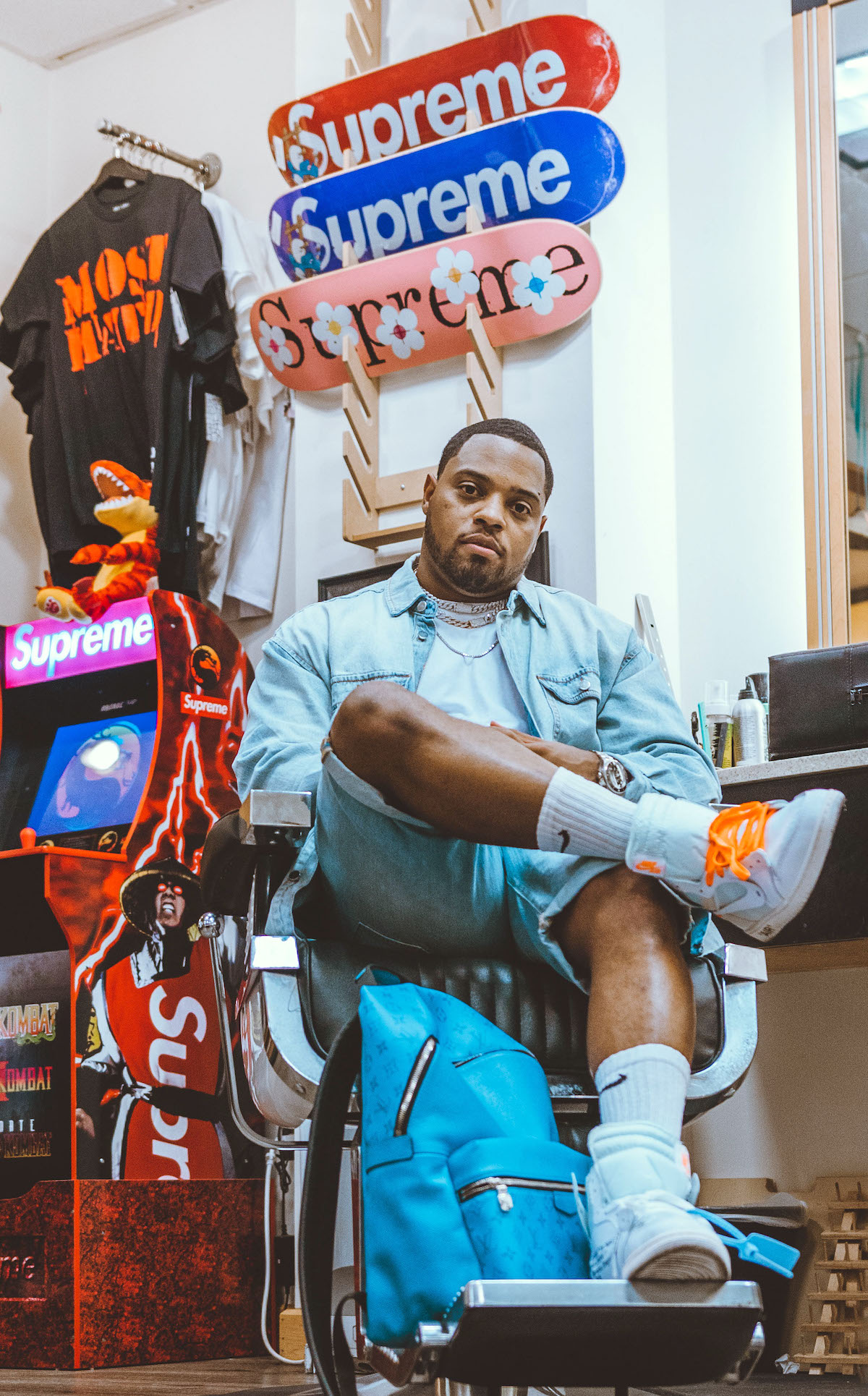 What’s always in your refrigerator?
Bacon and orange juice

If you could change one thing about yourself, what would it be?
Metabolism. I wish I could eat whatever I want, never have to work out and just stay looking fit. Haha!

If you had one day to spend as you please without any consequences, what would you do?
Go to the Nike Factory. I would buy every shoe they’re working on before they come out.

What’s the silliest thing you believed as a child?
Candyman. I thought he was so real. It’s still the scariest movie of all time to me.

What was your favourite class in school and why?
Math. I loved long-division algebra. How much you had to do to end up with the answer amazed me. Would use almost a whole sheet of paper just for one answer.

What world record would you like to break?
Most albums sold by a debut hip-hop artist. 50 Cent owns that record. For someone new in the game, to do something like that would be such an amazing accomplishment. And, I guess you can say 50 Cent isn’t doing too bad for himself.

What was the worst job you ever had?
Selling Vegas timeshares. It was horrible. People would fill out tickets to win a car in the mall. Their information would be given to us, and then we would call them to sell a timeshare. It was real cold calling. It was so hard, but the worst part was the pay. I lasted one month after I saw how many sales I had compared to my paycheck.

What’s the best and / or worst advice you were ever given?
The best was from my dad — “It’s not what you know but who you know.” Making connections in life has gotten me way more opportunities. Worst advice was someone telling me not to do music because it’s too hard to make it. That made me work even harder to prove them wrong.

Check out some of Sir Will’s videos above, listen to some of his jams below, and keep up with him at his website, Instagram, Twitter and TikTok. 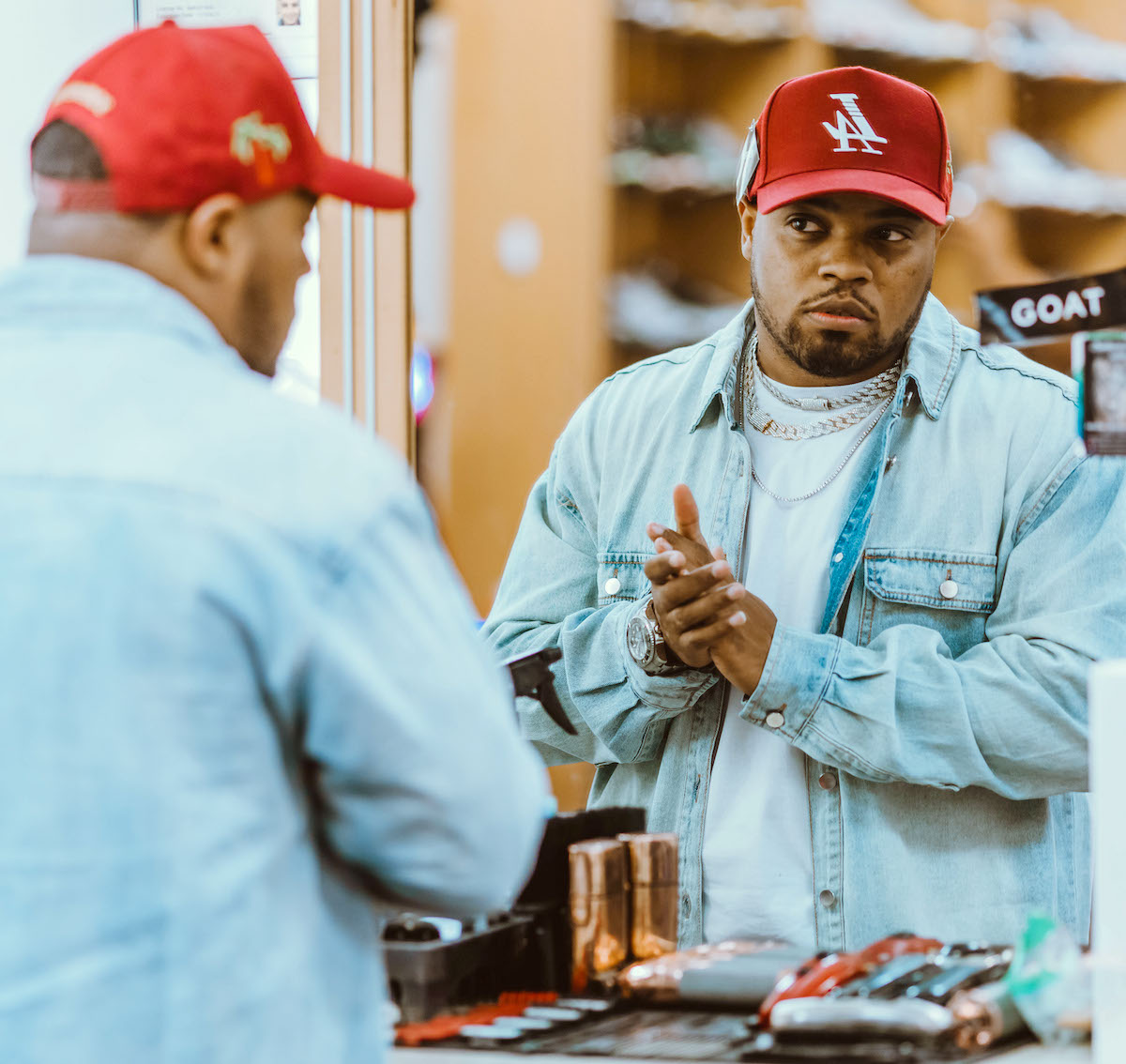