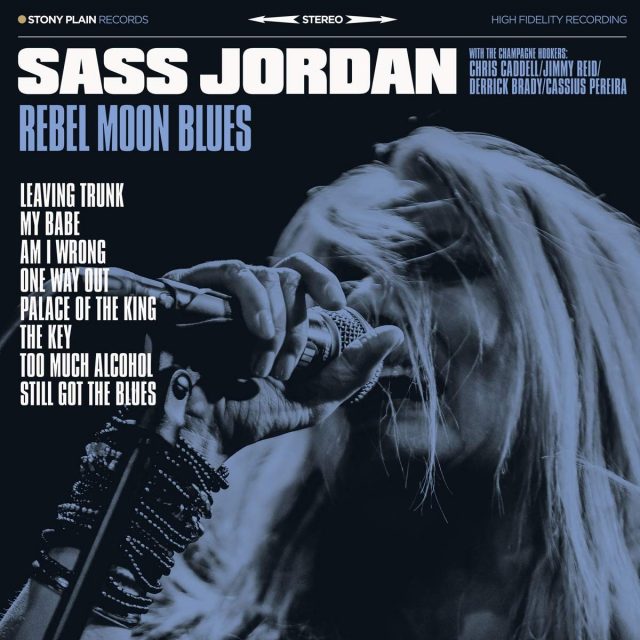 WHO IS SHE? The raspy-throated rock ’n’ roll queen (and former Canadian Idol judge) behind Can-rock classics like Make You A Believer, Tell Somebody, Rescue Me and the Joe Cocker duet Trust In Me from The Bodyguard soundtrack.

WHAT IS THIS? The first authentic blues album of her three decade-plus recording career, and her first solo disc in a more than a decade.

WHAT DOES IT SOUND LIKE? A welcome return. And a helluva homecoming. Cut on the fly and off the cuff with her touring band The Champagne Hookers and produced by husband (and current Guess Who frontman) Derek Sharp, the eight-song Rebel Moon Blues finds Jordan jubilantly and expertly celebrating the songs, sounds and styles of everyone from old masters like Willie Dixon, Elmore James and Freddie King to younger, louder guns like Gary Moore, Rory Gallagher, and The Allman Brothers Band. Along with seven classic covers, Jordan and Sharp contribute one brand-new tune titled The Key, which she freely admits was influenced by another idol: Tom Petty. (Full disclosure: I was paid to write some promotional material for the album. But honestly, I would be recommending this wicked little gem either way.)

WHAT SHOULD IT BE TITLED? I’m actually kind of fond of the original working title — Sassy Blues and The Champagne Hookers.

HOW SHOULD I LISTEN TO IT? Presumably while drinking her new Rebel Moon Whiskey. Though your own libation of choice will probably suffice in a pinch. Bottoms up.

WHAT ARE THE BEST SONGS? From the Taj Mahal-based take on Sleepy John Estes’ Leaving Trunk and the Allman-style version of One Way Out to the syncopated rendition of Leon Russell’s Palace Of the King and the Rory Gallagher-like slide-guitar take on J.B. Hutto’s Too Much Alcohol, it’s all killer and no filler.

WHAT WILL MY FRIENDS SAY? ‘I wouldn’t have thought she could pull it off — but she made me a … well, you know.’

HOW OFTEN WILL I LISTEN TO IT? Well, I’ve been listening to it since October, and I’m not tired of it yet.

IF THIS ALBUM WERE FOOD, WHAT WOULD IT BE? Barbecued ribs — or maybe chicken-fried steak — served with grits, greens and cornbread.

SHOULD I BUY, STREAM OR STEAL IT? Well, somebody has to pay for all those champagne hookers.