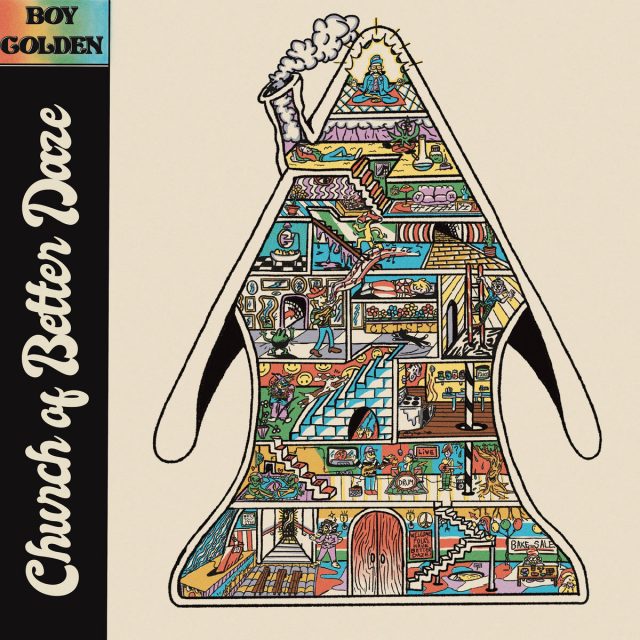 THE EDITED PRESS RELEASE: “A chrysalis in a 1940s lemon lounge suit, Boy Golden is poised to emerge fully formed from the pandopolis deep freeze with his charismatic vision of good vibes, even in hard times.

The Winnipeg singer-songwriter officially opens the doors to the Church of Better Daze with the release of his debut album. With his gospel of a few good words: Live well with what you’ve got, Boy Golden’s collection celebrates small wins and well-packed lunches with equal appreciation.

A charming dealer of laid-back devil on your shoulder advice for life, Boy Golden’s worldview is located somewhere between ‘work hard everyday’ and ‘quit that job!’ With a Soundcloud link and a 1995 Toyota Previa-sized personality, Boy Golden has a purpose: Enjoy each day and make good music. Founder and minister of The Church of Better Daze, he wants to help people seeking to improve on yesterday’s themes. His songs, like hymns, are hopeful, fresh and upbeat.

Redefining jam band and stoner cultures by turning dead heads into lively brains, Boy Golden wants to unite us all in a hazy dream under one roof. If you’re open to learn, and can speak your truth, you can blaze and still get paid in Boy Golden’s Church of Better Daze. Restrictions on cannabis messaging prevents us from detailing exactly how much fun you’ll have with Boy Golden’s debut album.”