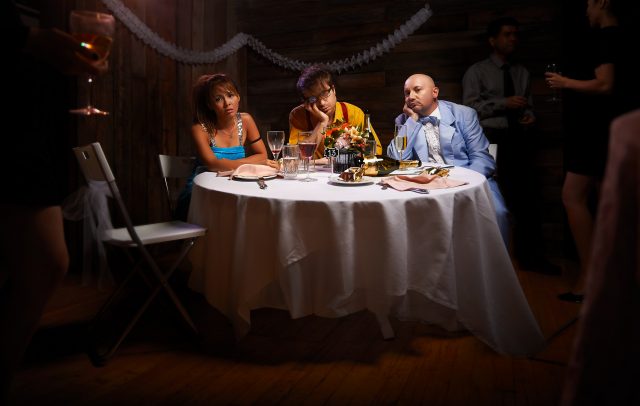 Ryan Luchuck has come back to musical life with Apocalyptic Zombies, a sneak peek at the self-titled EP from his new band How To Make People Like You — premiering exclusively on Tinnitist!

“This song is the first song I wrote and demoed for the new project,” says the Toronto songwriter, producer and multi-instrumentalist who is the um, brains behind the operation. “Kind of a test to see what direction we would head in. It turned into such a wild track that we decided to launch the new band with it. That piano lick was originally written on guitar but sounded a little too country — yet on piano it became something else entirely, I’m not even sure what. It’s actually really awkward to play without messing up.”

Speaking of messy, the trio’s sound makes bold use of novel instruments like garbage cans and grand piano with pens thrown on the strings, along with somewhat more conventional fare like cello, trombone and synth bass. “We love putting things together that shouldn’t work but do,” declares Luchuck. “Most of the drums on our EP are actually very cheap things you can find around the house.”

The disc features dazzling, quirky indie-pop tunes ignited by Luchuck’s ear-wormy compositions, Norm Authier’s bluesy vocals and the percussion of Cindy Goh, Luchuck’s fiancée. Fans of Arcade Fire, San Fermin and even ELO will find much to love in the four original songs — two brand new, two with roots in Luchuck’s past — and their dirgey/orchestral must-hear reading of the Oasis classic Wonderwall.

How To Make People Like You will be unveiled Nov. 18 at Toronto’s Burdock Music Hall, where Luchuck’s 400-pound upright piano will take centre stage. But you can get a preview by checking out Apocalyptic Zombies above.

“We shot a video to show what the live show looks like,” Luchuck says. “For some reason, the three of us all showed up in red suits. There must be some deep significance to that.”