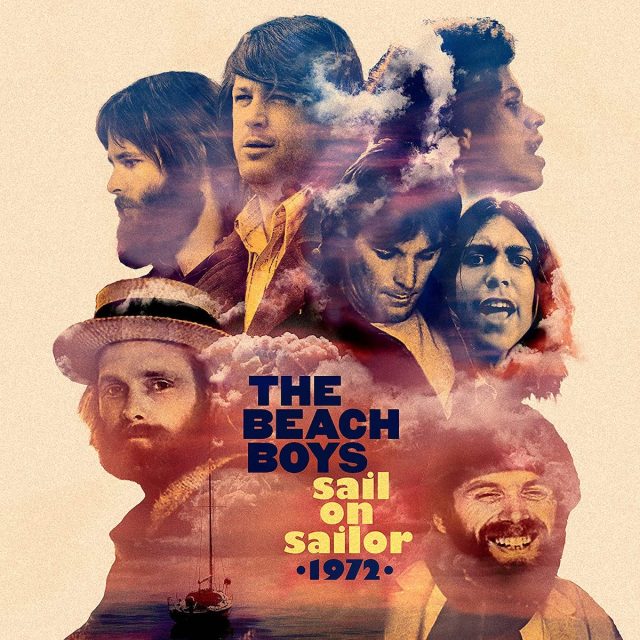 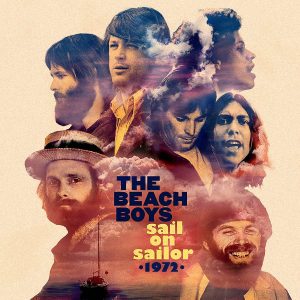 THE EDITED PRESS RELEASE: “The Beach Boys’ landmark albums — 1972’s Carl and the Passions – “So Tough” and 1973’s Holland — will take center focus in Sail On Sailor: 1972, a new expansive multi-disc and digital box set that documents and dives deep into this transformative and fruitful era. The latest chapter in the Beach Boys’ archival series was produced by Mark Linett and Alan Boyd, the team behind 2013’s Grammy-winning SMiLE Sessions and last year’s acclaimed Feel Flows – The Sunflower and Surf’s Up Sessions 1969-1971. The comprehensive six CD Super Deluxe Edition features newly remastered versions of Carl and the Passions – “So Tough” and Holland, plus Holland’s Mount Vernon and Fairway (A Fairytale) EP (complete with its original instructions to “please listen in the dark”), and boasts an unreleased live concert recorded at N.Y.C.’s famed Carnegie Hall on Thanksgiving 1972, the first-ever release of a complete Beach Boys concert from this era with the original setlist.” 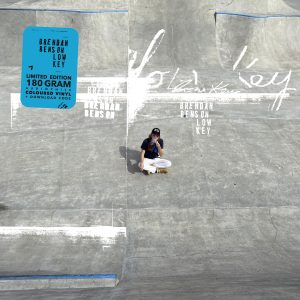 THE EDITED PRESS RELEASE: Not every two-year period measures out the same, notes Brendan Benson, the 51-year old Grammy-nominated singer-songwriter and co-founder of The Raconteurs. Benson had just finished his well-received seventh album Dear Life in 2019 when his world came to a stop. “Everything changed,” Benson said. “I went to work on some songs so I’d have new material when things opened up.” Over months with minimal interactions, those songs coalesced and took on lives of their own, he said. Two years of semi-isolation, of fading relationships, of the natural inward turn that comes with less human contact unexpectedly pushed Benson’s songwriting into new places. Instead of being an afterthought, Benson’s solitude evolved into Low Key, the eighth album by the idiosyncratic songwriter who has enjoyed both worldwide popularity with The Raconteurs and a devoted cult following for his numerous solo projects. Low Key, the Nashville artist said, was his chance to explore how lives and relationships changed during the lengthy isolation from the normal interactions of everyday life. “The lockdown afforded people the opportunity to cut ties — or maybe it caused people to do that,” he said. “Whatever the case may be, a lot of people fell out. But then relationships ending is one of my favourite topics for songwriting.” 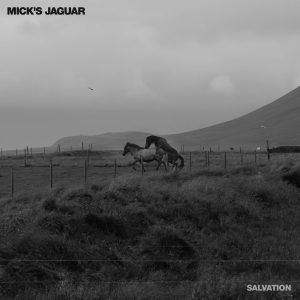 THE EDITED PRESS RELEASE: “Born to stalk death and destined to make righteous noise, Mick’s Jaguar are a force to be reckoned with. Formed in Brooklyn many moons ago as a one-off Rolling Stones covers band for an impromptu New Year’s Eve party, they are the bastard son of an unholy union between Judas Priest and Guns N’ Roses. Their debut album — 2018’s Fame and Fortune — received praise from both American and European press alike. Now, after losing their original bassist amidst the dense jungle boughs of Thailand, Mick’s Jaguar enlist the help of friends Jack Ridley (Drowners) and Aaron Roche (Wye Oak, Anhoni, Toth) to record another round of 10 bar-fighting rock tracks at Brooklyn’s Figure 8 Recording. The result? Their killer new sophomore album Salvation, which once again finds the band living too late, bound for hell and quite possibly, the greatest rock ’n’ roll band on the planet. “Like every band says at every show these days, it feels incredible to be back,” says vocalist John Martin. “But after the last three years of bullshit, this is the music you need.” 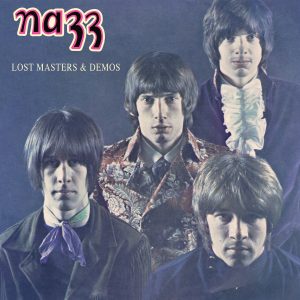 THE EDITED PRESS RELEASE: “Attention collectors! Check out this long-lost collection of unreleased Nazz studio recordings created by a burgeoning young songwriter and producer by the name of Todd Rundgren. Taken directly from the original master acetates, this box set collects the originally conceived 1968 rough mix of Nazz’s sophomore album Nazz Nazz created by Rundgren as he begins to learn the production techniques that made him the highly acclaimed producer he is today. The set also contains unreleased alternate mixes from 1967-1968 of tracks such as Hello, It’s Me, Open My Eyes and many more not available anywhere else.” 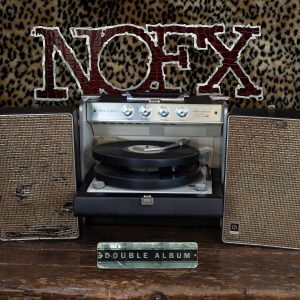 THE EDITED PRESS RELEASE: “It’s not hyperbolic to say NOFX are making their best music now. But that’s not to imply everything else they’ve done was mediocre, either. Double Album reminds both ardent fans and casual listeners that NOFX weren’t born to follow trends. Indeed, NOFX — Fat Mike, guitarists Eric Melvin and El Hefe and drummer “Smelly” Eric Sandin — have carved their logo into the veneer of punk-rock culture for decades. With nearly 40 years in this circus, you’re going to meet people and do/see/conspire to get all the wildest shit done. Remember how one of the stipulations of the NOFX book Hepatitis Bathtub was that none of the band members could see what the other ones were writing about them? Well, this time, Mike got permission to blow up the foibles and peccadillos of people in song for maximum velocity and hilarity. “You have to laugh at everything,” Mike reveals, “because the world is just falling apart and you have to have a good attitude and not take everything too seriously. So this is how I’ve always done it. I make people laugh every day. I usually do it in a self-deprecating way, it’s just how I go through life: I have as much fun as I can. That’s what life is — trying to find all the happiness you can. And spreading happiness. Which is what I feel like is supposed to be my job in life — spreading joy.” 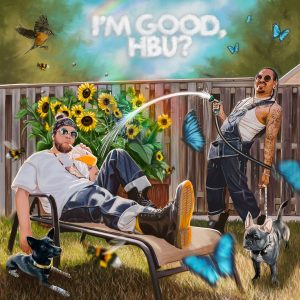 THE EDITED PRESS RELEASE: “Hot on the heels of three wins at the 2022 Western Canadian Music Awards, Snotty Nose Rez Kids are ready to unleash their next offering, a reflection of a transitional period for the band — of getting back on track, of finding and expressing their confidence in themselves, and in their futures. I’m Good, HBU? follows SNRK’s previous release, Life After — a collection of music that the band wrote during darker times; during the pandemic, contemplating the loss of many aspects of their business and music career, meditations on substance use, depression, suicide and the uncovering of mass graves at residential schools. Going through this period and coming out of it on the other side — welcomed by the world opening back up, finally able to tour and completing over 80 shows to date all over North America — the band began writing music about coming out of that darkness. The new album finds SNRK honing in on their sound, exploring new cadences and flows, working with new producers and some familiar faces, and bringing in new feature artists like Dillanponders. SNRK wanted to give their fans a cohesive project that showcases how the internal work they did on themselves has been working, and that the duo is finding their confidence in the future, their internal love and self-worth.” 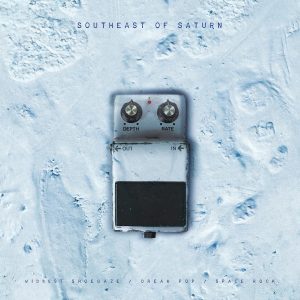 THE EDITED PRESS RELEASE: “Third Man Records is excited to announce Southeast Of Saturn Vol. 2. The compilation is a followup to 2020’s Southeast of Saturn, a collection of music from Detroit’s space-rock / shoegaze / dream pop scene of the ’90s. The second volume expands upon the Michigan-centric aural delights purveyed on Vol. 1 by including groups from throughout the Midwest. Highlighting groups spanning Michigan, Ohio, Illinois, Indiana, Wisconsin, and Minnesota, Vol. 2 works to cement the Midwest’s status as a breeding ground for the space-rock and shoegaze subgenres, which more famously burgeoned in the U.K. Once again, there are no big names or crossover artists on Southeast Of Saturn Vol. 2. However, for those who know that digging deep in the real and virtual record bins yields the greatest rewards, this 18-track compendium will trigger profound swoons. We’ve scoured the Midwestern underground, highlighting the evanescent acts of the ’90s such as Star Phase 23 and Sidereal, so you don’t have to. Southeast of Saturn Vol. 2 is first-class aural escapism from America’s big-shouldered outpost of outward-bound rock.” 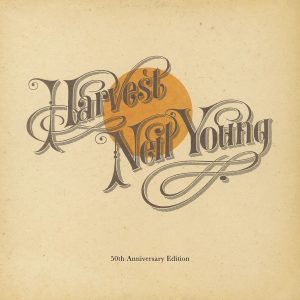 THE EDITED PRESS RELEASE: “Neil Young’s fourth solo album Harvest remains one of the most beloved in his catalog and is dense with songs that have long-permeated radio waves. The 50th Anniversary Edition Box Sets boast the original album, three studio outtakes on CD/7” vinyl, an unreleased live 1971 BBC solo performance on CD, LP and DVD. The film Harvest Time is a previously unseen two-hour documentary in 1971, documenting the Harvest sessions. Also included in the package is a hardbound book and fold-out poster. The vinyl box sets include a lithograph print. Fans of the record will receive a new glimpse into Harvest through the two DVDs included in the box set. The first is Harvest Time, an unreleased two-hour film shot during the making of Harvest, with footage from Young’s Harvest Barn sessions in Northern California, recording sessions in Nashville and London. The second is a film of the unreleased solo BBC Concert recorded on Feb. 23, 1971. Also included are three unreleased tracks from the original Harvest sessions: Bad Fog of Loneliness, Journey Through The Past, and Dance Dance Dance. Additionally, the hardbound book will include never-before-seen photos along with extensive liner notes by photographer Joel Bernstein.”