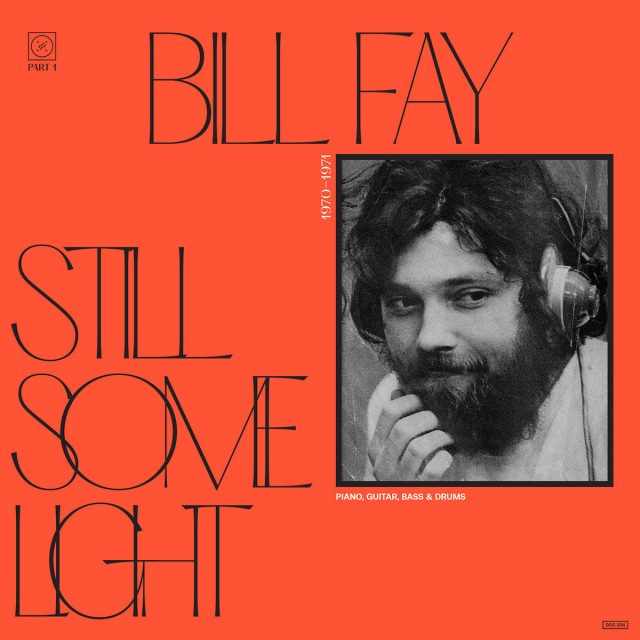 THE EDITED PRESS RELEASE: “Bill Fay’s Still Some Light is a double compilation album made up of ’70s album demos and 2009 home recordings. It was originally released as a two-CD collection in 2010. Reimagined with new artwork and available for the first time on vinyl, Still Some Light Pt. 1 collects Fay’s archival recordings from 1970 and 1971. Many are intimate sketches which were eventually re-recorded for Fay’s landmark second album Time Of The Last Persecution.

For the release of Still Some Light Part 1, David Tibet, a long-time fan and collaborator of Bill Fay’s, wrote the following introduction: ‘It must have been around 2000 that I first heard of Bill Fay. The artist and polymath Jim O’Rourke asked me if I had ever heard of him. Like almost everyone in the world, apart from rare-vinyl obsessives, I said I hadn’t. Jim then extolled Fay’s virtues in a fascinating pæan to him and his creations, and I was already hooked without having heard anything Bill had created.

There was a See For Miles CD which included both of Bill’s incredibly rare albums from 1969 and 1970, as well as his sole single from 1967. I bought it, put it on, and in swept The Garden Song. From that very first song, I knew I had discovered the artist who, for me, was the greatest singer-songwriter I had ever heard.

So I had to find Bill Fay. But there were very few leads out there; the usual comment was based on the cover of Time Of The Last Persecution — “I think he’s somewhere leading a religious group;” “he’s disappeared completely;” “he’s become a Christian hermit somewhere.” Through various synchronicities I did manage to find Bill and we have been very good friends now for almost a quarter of a century, so I hope Bill won’t mind my stating he is indeed a very private man.

I was honoured and delighted to get to know Bill well. Bill is the kindest, most generous, most supportive, most gentle, and most talented of men. Anyone reading this, I am sure, already knows of the profundity, and simplicity, of his work, and the intense emotional truth and honesty it carries — all of which Bill himself also has in his soul. Still Some Light, which you now are offered, (is) a collection of treasures from the Bill Fay treasure chest, full of delights, and reality, and as real as rainbows.’ ”