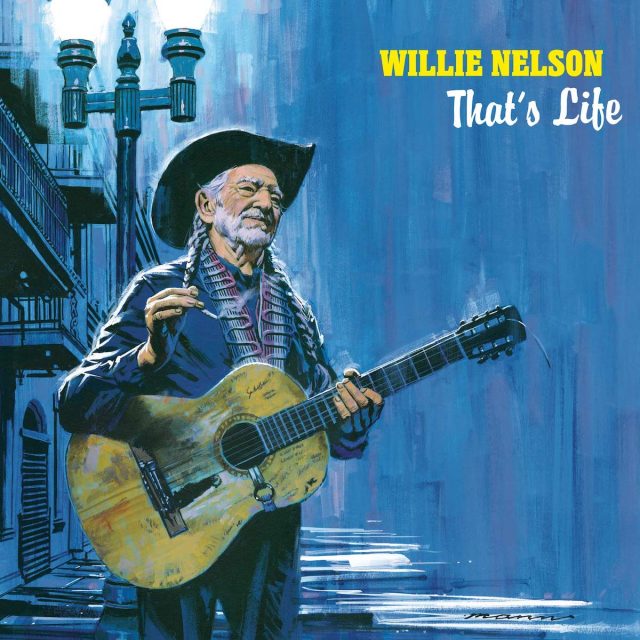 THE EDITED PRESS RELEASE: “Honoring the enduring influence and inspiration of Frank Sinatra (whose 105th birthday would have been celebrated on Dec. 12, 2020), That’s Life continues Willie Nelson’s longtime musical appreciation of Sinatra’s artistry and repertoire, an exploration exemplified by 2018’s My Way, which earned Willie the Grammy for Best Traditional Pop Solo Album.

Willie’s second album of standards and classics made famous by Sinatra, That’s Life finds Nelson (who has penned a few standards himself, including Crazy, Funny How Times Slips Away, On The Road Again and many more) inhabiting more of the most treasured songs in the Great American Songbook. Recorded in the spirit of the groundbreaking 1978 Stardust album (Willie is one of the first contemporary artists to “cover” the Great American Songbook), 2016’s Summertime: Willie Nelson Sings Gershwin (a Best Traditional Vocal Album Grammy Award winner) and My Way, That’s Life pays fresh tribute to one of Willie’s life-long musical heroes.

The album cover painting of Willie and his iconic guitar Trigger, standing into the glow of a twilight streetlamp, evokes classic Sinatra album images like In The Wee Small Hours (whose title song is featured on That’s Life). Other key tracks on Willie’s new album include I Won’t Dance (featuring Grammy and Juno-winning vocalist Diana Krall) and A Cottage For Sale.

Produced by Buddy Cannon and Matt Rollings, That’s Life was recorded at Capitol Studios in Hollywood — where Sinatra, the first artist to record at the facility, created an unbroken string of album masterpieces from March 1956 to November 1961 — with additional recording at Pedernales Studios in Austin. Willie and Trigger deliver 11 new studio performances, coming alive in a musical landscape animated by lush string and vibrant horn arrangements on an album mixed by recording industry legend Al Schmitt (who’s recorded and mixed more than 150 gold and platinum albums and won more Grammy Awards than any other engineer or mixer).

Two iconic avatars, each defining a sector of American pop culture, Sinatra and Nelson convey the range of romantic emotion — from the intoxication of love to the hangover of heartbreak — in songs and performances that connect directly to the listener. Willie and Frank were close friends, musical colleagues and mutual admirers of each other’s work throughout Sinatra’s lifetime. In the 1980s, Sinatra opened for Willie at the Golden Nugget in Las Vegas and the two of them appeared together in a public service announcement for NASA’s Space Foundation. “I learned a lot about phrasing listening to Frank,” Willie says. “He didn’t worry about behind the beat or in front of the beat, or whatever — he could sing it either way, and that’s the feel you have to have.”

That’s the attitude Willie brings to That’s Life with his sublime interpretations of Sinatra signature songs including Nice Work If You Can Get It, Just In Time, Cottage For Sale, I’ve Got You Under My Skin, You Make Me Feel So Young, I Won’t Dance, That’s Life, Luck Be A Lady, In The Wee Small Hours Of The Morning, Learnin’ The Blues and Lonesome Road.”