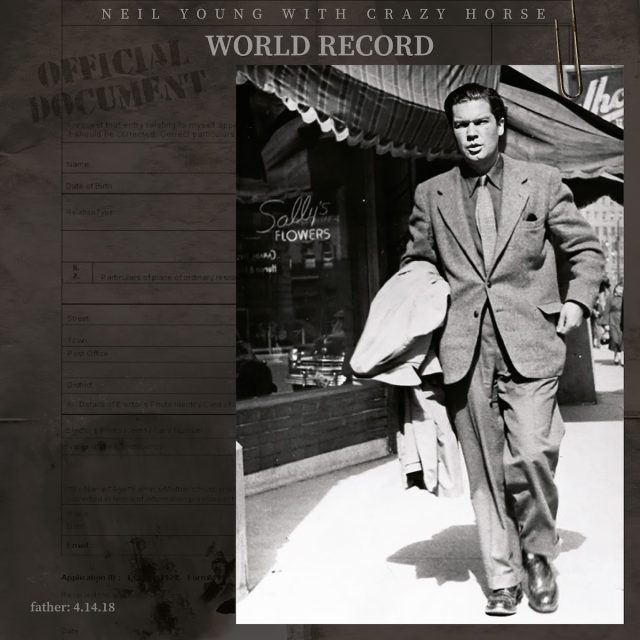 THE EDITED PRESS RELEASE: “Neil Young with Crazy Horse have announced details about their illuminating World Record, recorded at Shangri-La in Malibu and produced by Rick Rubin and Neil Young. The first track from the album Love Earth, is available now below.

This spirited 10-song collection is a cautiously optimistic meditation on the past, present, and future of our shared planet and what it means to live on it. Available for pre-order today and coming to most DSPs on Nov. 18 via Reprise Records, World Record will be available on vinyl, CD, and cassette formats via The Greedy Hand Store at Neil Young Archives and music retailers everywhere.

World Record contains a wealth of wisdom, and the kind of poignant observations one can only be collected over an eventful life. The iconoclastic songwriter reminisces with gratitude about the gifts the Earth has given him and sets his sights on an uncertain future with hope that we can right this big, blue and green ship. He does so in a vital and unyielding fashion.

There’s affecting folk (This Old Planet (Changing Days), Love Earth), pummeling rock (Break The Chain, The World (Is In Trouble Now)), and a monumental, classic Crazy Horse guitar odyssey in which he pays tribute to his relationship with cars while asserting the necessity of a fossil-fuel-free future (Chevrolet). World Record is a cohesive vision that spreads positive energy while not flinching from our present situation. As Young himself said in a message on the Times-Contrarian during the making of World Record: “Real magic lasts and we think we have it.”

Recorded live in order to wrangle the Horse’s long-running spirit of spontaneous, collaborative, and electrifying performance, the album was mixed to analog tape at Shangri-La under Rubin’s sage guidance. The quality of the resulting listening experience sets fans directly on the studio floor as Young and the legendary band do what they do best.

To optimize audio quality, the vinyl format of World Record will be released as a three-sided double album with an etching on side four. There will also be a limited-edition version of the album pressed on clear vinyl — a first in Young’s body of work — available via Young’s webstore and indie retailers. World Record will also be issued on cassette and as a double CD set (mirroring the track sequence of the double LP). All Greedy Hand Store purchases of World Record (LP, CD or cassette) come with free hi-res digital audio downloads.