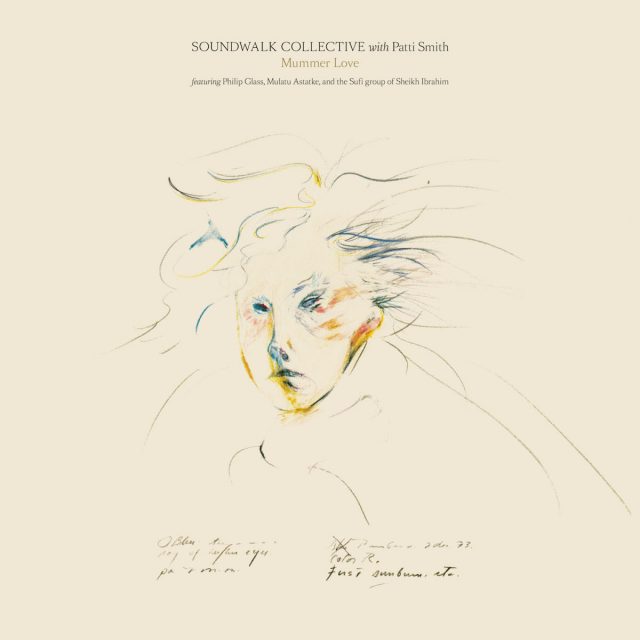 WHO ARE THEY? A multi-disciplinary meeting of minds between legendary punk poet Patti Smith and the experimental NYC/Berlin duo Soundwalk Collective.

WHAT IS THIS? The second instalment in a triptych of collaborative concept albums inspired by the travels of avant-garde French poets Antonin Artaud, Arthur Rimbaud and René Daumal, Mummer Love arrives five months after The Peyote Dance.

WHAT DOES IT SOUND LIKE? Less accessible than you might have expected. Although doomed French poet Rimbaud, the subject of this set, is easily the most well-know of the trio, this album — reportedly inspired by his time and travels in Ethiopia — ends up downplaying his verses in favour of Smith’s haunting wordless vocals, and a brooding Sufi-inspired score.

WHAT SHOULD IT BE TITLED? Rimbaud: Bloodless.

HOW SHOULD I LISTEN TO IT? While meditating. And if you’re not careful, dozing.

WHAT ARE THE BEST SONGS? The thumpy Eternity, the title track and Farewell are the cuts that allow Smith to sink her teeth into Rimabuad’s work. But like its predecessor, there are more like chapters in the world’s freakiest audiobook than songs.

WHAT WILL MY FRIENDS SAY? ‘You’d think an album inspired by a poet would have a lot more poetry in it.’

HOW OFTEN WILL I LISTEN TO THIS? About as often as you read poetry.

IF THIS ALBUM WERE A MOVIE, WHAT WOULD IT BE? A black-and-white foreign film without plotline or subtitles, shot on Super 8.

SHOULD I BUY, STREAM OR STEAL IT? Unless you collect everything by Smith and/or Rimbaud, you can probably save your money.