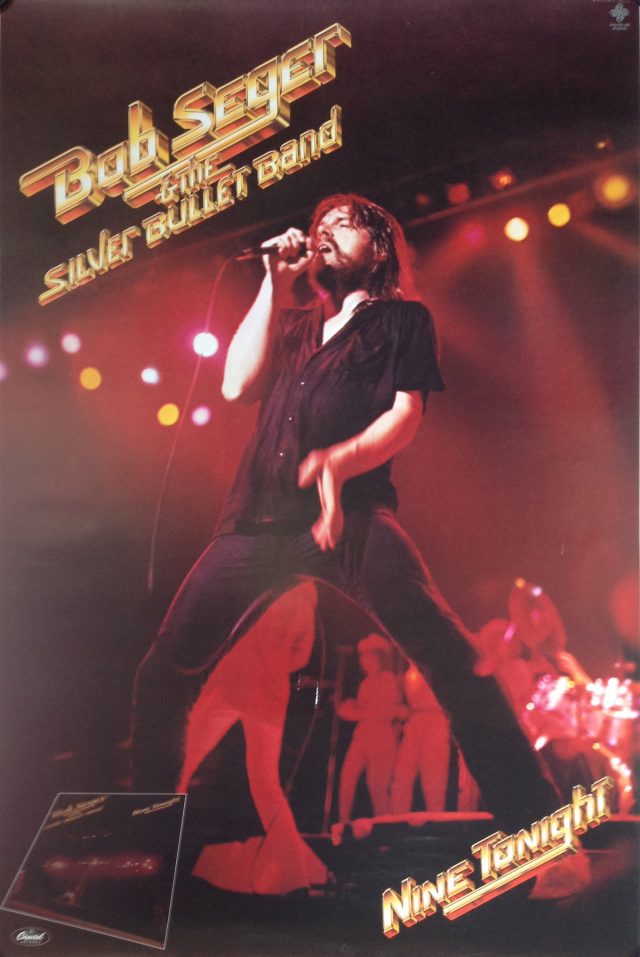 Now that Bob Seger is on his farewell tour, it seems like a good time to spotlight this vintage promo poster from his 1981 live album Nine Tonight. I don’t believe I caught him on the tour that spawned this set, but I distinctly remember the first time I saw Seger and the Silver Bullet Band live. They had the indignity of opening up for Bachman-Turner Overdrive on a mid-’70s arena tour. I was probably too young and stupid to truly appreciate the greatness of Seger at that point, though I certainly liked him enough to start paying attention to his music. Live Bullet — his current release at the time — was the first one I bought. You really couldn’t ask for a better introduction to the man’s early work — the set list has everything from classics like Katmandu, Ramblin’ Gamblin’ Man, U.M.C. and Get Out of Denver to his cover of Nutbush City Limits. By contrast, Nine Tonight is quite understandably focused on later chart-toppers like Hollywood Nights, Old Time Rock & Roll, Her Strut and Rock and Roll Never Forgets. No complaints there, though I can’t say I’m the biggest fan of the heartland-rock pickup-truck jingles he started cranking out a little further down the road. As I’ve previously written about HERE, I remain a way bigger fan of his earlier, harder-edged fare — apparently even a bigger fan than he is at this point. Oh well. Anyway, whichever era you’re a fan of, this poster might make a decent addition to your collection. It’s in great shape. If you’re interested in buying it, EMAIL ME.