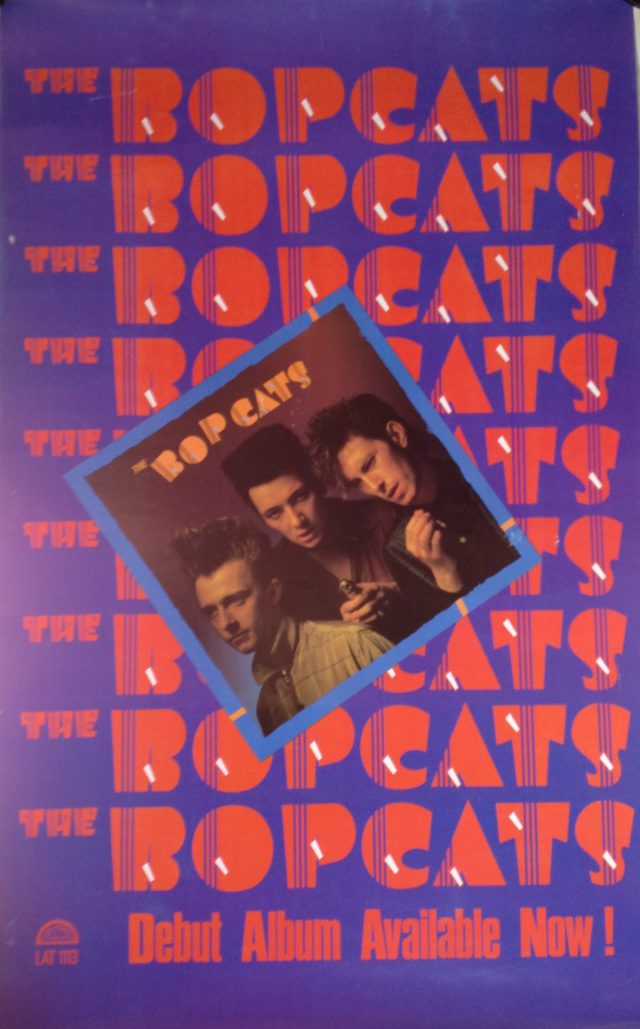 If you remember The Bopcats, congratulations! You’re old like me. If you don’t, here’s the skinny: These Torontonians were Canada’s chief contribution to the early ’80s rockabilly resurgence spearheaded by The Stray Cats. Their lineup included singer Sonny Baker (he’s in the centre of this picture), drummer Teddy Fury (left), guitarist Jack deKeyzer (right) and bassist Zeke Rivers (who apparently wasn’t around when this debut album came out on Attic Records in 1981). They weren’t around for long; the band only released a couple of LPs and a handful of singles before the whole rockabilly trend died and presumably took them down with it. Years later, I recall that Baker (who eventually went to work for a record-store chain and used to contact me occasionally to talk about music) made headlines when he took his ex-fiancee to court after she refused to return their engagement ring. I also remember seeing Fury on one of those TV redecorating shows; I believe he was working as a bartender at the time. Far as I know, deKeyzer is still a working musician; as for Rivers, who knows? Why do I know so much about The Bopcats, you ask? Well, mostly because that’s the sort of trivial detritus that takes up space in my brain whether I like it or not. And partly because back in the day, I was in a rockabilly band that opened for them once. Ironically, I don’t recall much about the gig itself. But I vividly remember that while we were loading up our gear afterward, Rivers strolled past us backstage with a gorgeous groupie on each arm, chiding us about the fact that we didn’t have roadies. Clearly he made the most of his time in the spotlight, even if he didn’t make the album cover. Anyway, if you’d like to own this rare piece of Canadian rockabilly memorabilia, EMAIL ME.