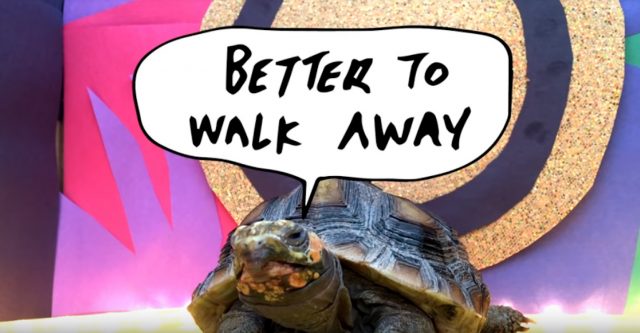 1 | Indie supergroup alert! If you’re a fan of Get Up Kids, The Anniversary, Architects or Gadjits, you’ll want to put Kansas City outfit Radar State on your musical radar. And get a sneak peek of what you’re in for with the video for their crunchy little nugget Anywhere, starring a surprisingly communicative turtle. SEZ THE PRESS RELEASE: “Radar State is made up of emo/indie rock heroes Matt Pryor and Jim Suptic, Josh Berwanger and Adam Phillips.” See them come out of their shells:

2 | Metal bands generally come in a couple of varieties: You’ve got your technically astounding musos who spin complex webs of sound from syncopated prime-number beats and complex chord changes. Or you’ve got our black-clad behemoths who crush your skull with brutal vocals and thundering power. Then you’ve got Bay Area natives Aenimus, who surgically split the diff on their new song Before the Eons, from their Dreamcatcher album. SEZ THE PRESS RELEASE: “Dreamcatcher is a concept album that draws inspiration from horror novels and movies,such as It, The Shining, Hannibal Lecter and The Dead Zone.” The Before picture:

3 | When is a garage band not a garage band? When they’re BlackBirds. The female-fronted French quintet fall squarely on the boogie-rock side of the musical equation. But that didn’t stop them from shooting their first video — for their new song Too Bad — in an auto shop. SEZ THE PRESS RELEASE: “The song is about the difficulties of relationship in love, but the video was made to treat the subject in a BlackBirds way: With a lot of fun and rock ‘n’ roll.” Don’t forget the hilariously bad acting and dance moves!

4 | Everybody likes to watch a roaring fire. And the new lyric video for I’m On Fire Tonight, the new single from Norwegian headbangers Chrome Division and their final album One Last Ride, features both flames and plenty of roaring. SEZ THE PRESS RELEASE: “For this last trip, the Norwegians led by Dimmu Borgir‘s Shagrath once again got their original singer Eddie Guz on board and with I’m On Fire Tonight, Chrome Division present another single from their new album.” Got a light?

5 | Tradition must not be abandoned. But progress cannot be denied. Put those two principles together and you have Starlight, a striking musical hybrid from groundbreaking indie-psyche trio Nêhiyawak — who released this title cut from their upcoming EP on the 133th anniversary of the day Louis Riel was hanged. SEZ THE PRESS RELEASE: “Set to a hypnotic crow hop rhythm, Starlight is encircled by captivating ambience: the pulse of synths, strands of distorted guitar, and a vocal performance that flows over with beauty and devastation.” Look way up:

6 | You all know about the singularity, right? The theory that one day, artificial intelligence will become sentient and either save mankind or destroy it. I know which one my money’s on — though perhaps Jon Hopkins had a different outcome in mind when he titled his latest album Singularity. In either case, there’s now a second Singularity, thanks to this new remix by one-named Brazilian producer Anna. SEZ THE PRESS RELEASE: “Anna’s remix blends rugged techno and transcendent electronics, which mirrors the pinnacle of the album’s motion, delivering a claustrophobic yet uplifting energy.” I, for one, welcome our new technological overlords:

7+8 | Sure, Serpentwithfeet sounds like the supernatural villain of a nightmarish horror movie. But it’s actually the alter-ego of Brooklyn pop experimenter born Josiah Wise. And like a snake with extra appendages, he move fast. Less than a year after releasing the acclaimed disc Soil, Wise is back with Soil Reprise, featuring bare-bones versions of previously release cuts Bless Ur Heart and Messy. SEZ THE PRESS RELEASE: “These stripped-back versions highlight the intimacy of Serpentwithfeet’s songwriting and his ability to make listeners feel a deep personal connection to him. Both songs explore the topics of uncertainty.” Are you sure?

9 | We all live in our own little worlds. But London-based Dutch-Zimbabwean pop innovator Rina Mushonga might live in her own galaxy. I’m basing that on the fact that her upcoming album is titled In A Galaxy — and the David Byrne-like single Hey Coach is a groovy African-tinged gem that is most certainly out of this world. SEZ THE PRESS RELEASE: “Written from a personal perspective, this song is about responsibility and ownership and she explains; it’s about motivation, career-wise, no-one’s gonna fight for your ‘art’ as hard as you are, nobody has invested what you have in the same way and it’s about self-reliance and getting on with it…even when the odds appear to be stacked against you.” She’s ready to play:

10 | I don’t have to tell you that Andalusia is a large autonomous region of hills, rivers and farmland bordering Spain’s southern coast. It was under Moorish rule from the 8th-15th centuries, a legacy that shows in its architecture, including such landmarks as the Alcázar castle in Seville, the capital city, as well as Córdoba’s Mezquita Mosque-Cathedral and Granada’s Alhambra palace. So I’ll just tell you Andalusia is also the title of New York City electro duo Paris_Monster‘s darkly compelling new single. SEZ THE PRESS RELEASE: “Employing heavy elements of funk and soul, Paris_Monster closes a gap between synthesized sound & garage; between modern detail and old-school grit.” Now_you_tell_me: