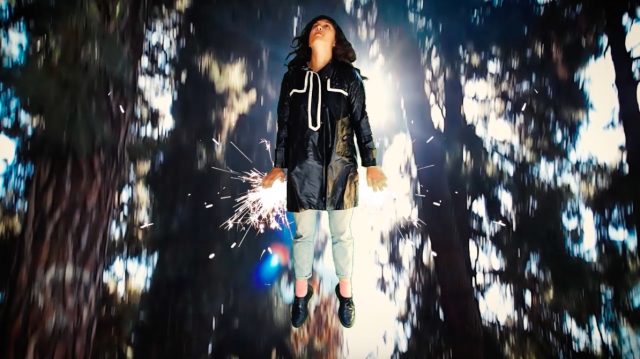 Every day I get press releases from indie bands with new songs, albums and videos to hype. Here’s the latest batch:

• Tokyo Police Club share the video for their single Simple Dude, from their upcoming fifth album TPC, due Oct. 5 on Dine Alone Records. SEZ THE PRESS RELEASE: “The video was created using film negatives shot by bassist/vocalist Dave Monks during the recording of the band’s new album in Los Angeles this winter – scratching lyrics and imagery directly into the film negatives, animated by videographer Anne Douris.” See the full cut here:

• Edmonton pop-rockers Altameda return with the hooky track Rolling Back To You, from their forthcoming sophomore full-length Time Hasn’t Changed You, due early 2019 via Pheromone Recordings. SEZ THE PRESS RELEASE: “Paying homage to what came before while remaining very much of the moment, Rolling Back To You is a blend of classic rock and folk traditions.” Judge for yourself:

• Glam-rocker Art d’Ecco (gee, I wonder if that’s his real name) unveils the video for Nobody’s Home from his album Trespasser, due on Paper Bag Records Oct. 12. SEZ THE PRESS RELEASE: “(Trespasser is) a richly realized confluence of the ferocious spark of trailblazers (including Deerhunter’s Cryptograms, Bowie’s Low, and choice krautrock records) and a distinct sadness, with d’Ecco as mad scientist, stitching together these delicious fragments and animating them.” Here’s what that looks like:

• Boston art-rockers Guerilla Toss offer their new single Come Up With Me as a preview of their disc Twisted Crystal, out worldwide on DFA Sept. 14. SEZ THE PRESS RELEASE: “Guerilla Toss legit flex their new wave influences on Come Up With Me, both spastic and graceful, like Debbie Harry backed with the jittery energy of Devo.” Get the full effect here:

• London-based “pop futurist” Rina Sawayama presents the video for her single Cherry. SEZ THE PRESS RELEASE: “The engrossing new visual, directed by Isaac Lock, sees Rina looking as vibrant as ever, breathing new life into a sullen dance studio with a beautifully choreographed performance of the song alongside a diverse cast of backup dancers.” And feathers:

• Folk artist and singer-songwriter Lonnie Holley offers the single Sometimes I Wanna Dance, from his album MITH, out Sept. 21 on Jagjaguwar. SEZ THE PRESS RELEASE: “Sometimes I Wanna Dance features a jaunty piano riff courtesy of Lonnie’s fellow cosmic traveler Laraaji as Lonnie himself exalts bodily movement in all its forms: From a child’s instinct to move to a groove, to how simply dancing can help us get over our very worst days. In an age of bombastic dance-pop, this minimal groove with nary a drum (!!) is refreshing, buoyant and beaming.” Enjoy:

• New Zealand indie-rockers The Beths release the charming video for Little Death, a nicely noisy number from their debut album Future Me Hates Me, out now on Carpark Records. SEZ THE PRESS RELEASE: “(The director) Norwood hit us up, saying, ‘I made videos for Superchunk in the ’90s, let me make a Super 8 video for you guys when you’re in L.A.’ So we spent a day larking about and scratching on film and then he edited it up. It’s difficult to tell, but if you look closely you can see there is some green screen footage and special effects added afterwards.” Take the challenge:

• Indigenous artist Black Belt Eagle Scout (aka Portland-based Katherine Paul) presents Indians Never Die, a gorgeous single whose accompanying video was filmed on the ancestral lands of the Chinook, Chinnuk Wawa and Tillamook tribes. It comes from her debut album Mother of My Children, out Sept. 14 on Saddle Creek. SEZ THE PRESS RELEASE: “Indians Never Die is a call out to colonizers and those who don’t respect the Earth; they don’t care about the water, they don’t care about how they are destroying what is around them. Indigenous people are the protectors of this land. Indians never die because this is our land that we will forever protect in the present and the afterlife.” You have been told:

• Buffalo, N.Y., pop duo Super American shop their new single Chris From Walmart ahead of their debut album Tequila Sunrise, which arrives Sept. 14 on Take This To Heart Records. SEZ THE PRESS RELEASE: “The track features an energetic and melodic guitar riff that instantly gets stuck in the listener’s head, as well as biting and comedic lyrics in relation to the narrator ending up with a partner that someone they know, the titular Chris From Walmart, was romantically interested in.” Hear it here: