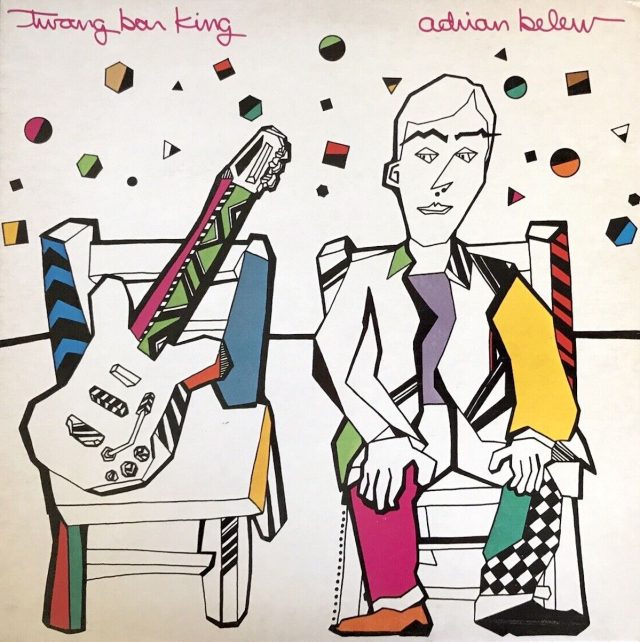 When you went to high school, was there that one student who was just amazing at guitar? There were two of them when I was in high school. For those attending Ludlow High School in Covington, Ky., in 1965 that student was Adrian Belew. Or, Steve, as everyone knew him.

He didn’t start going by Adrian until the mid-’70s when he moved to Nashville to fulfil his late-bloomer dream of becoming a professional musician. But it happened. At age 27, in 1977, he was playing with the local band Sweetheart when, at the behest of his chauffeur, Frank Zappa dropped by to see the phenom for himself and offered Belew an audition.

Belew wasn’t happy with his formal audition and managed to persuade Frank to allow him a second, which happened in Zappa’s home. He got the job and played with the band for a year, appearing on the 1979 album Sheik Yerbouti, where he even sings lead on two songs. Belew was a perfect fit — a funny extrovert, clever and sharp and an incredible, unique and explosive player.

Brian Eno managed to catch a Zappa show in Germany during Belew’s year in the band, and promptly recommended him to his pal David Bowie, who hired him. Belew played on the 1978 tour and appears on the live two-record set Stage. He also performs on the criminally overlooked Lodger album from 1978. Bowie returned the favour in 1990 performing the duet Pretty Pink Rose on the album Young Lions, two years after Belew performed on the Sound & Vision tour. This year Belew and Todd Rundgren did a Celebrating David Bowie tour.

In late 1980, Robert Fripp started putting a new band together, not planning to call it King Crimson. He first recruited drummer Bill Bruford, then Belew. Having just finished a tour with Talking Heads (he plays on Remain In Light), Belew agreed to join — additionally becoming the band’s lyricist as well. He served as frontman and made seven albums with the reconstituted Crim, which also included (and still includes) bassist / Chapman Stick master Tony Levin. During the early going, Belew began making solo records. Today we’re shining the spotlight on the second one: The brilliant Twang Bar King from 1983, recorded while he was living in Springfield, Ill. (and listed in the phone book).

Twang Bar King was created between the recording and tours of Crimson albums Beat and Three Of A Perfect Pair with a mobile unit in the band’s rehearsal space, but the title track’s guitar and vocal were done at a small eight-track demo studio called Cwazy Wabbit, belonging to a pair of local musicians. It’s the same place he recorded his first solo album Lone Rhino the year before. Both albums use members of his pre-Crimson band GaGa as session musicians.

Twang Bar King contains one of the two songs which were my introduction to Belew’s music — a pal included Big Electric Cat and The Ideal Woman on a rather eccentric but rockin’ mixtape which also served as my introduction to Klaatu, Frank Zappa and Severed Heads. Big Electric Cat is the masterpiece which opens Belew’s debut album, and The Ideal Woman is this album’s masterpiece.

Twang Bar King begins with a Beatles cover — I’m Down, which was the flipside of the Help! single. It’s also the song during which a goofy, Vox Continental organ-playing John Lennon cracked up both George Harrison and Paul McCartney at their famous Shea Stadium concert.

Belew, bravely, does it justice. His version rips, particularly from the solo onward. The low-budget video is kinda charming as well.

I Wonder is next and really shows off what he learned playing with Talking Heads, but it also plows along with the pent-up frenzy of early XTC. Then it’s on to Life Without A Cage, a chiller, groovier number. I don’t really care for this one. It’s awkward, but not in a good way. It just sounds very Belew.

He makes up for it, and then some, on the next song — the title track Twang Bar King, which comes after a short R&B segue with Vocoder and 808 drum programming called Sexy Rhino. Twang Bar King is an angular, frenetic, proto-punk banger with farty bass and signature Belew guitar squeal/wailing. I’ve always wanted to say this, but I’m certain Butthole Surfers rip off the ending of this song in their track Lady Sniff. Then it’s Another Time, which sounds like the kind of music Belew would be doing in about five years. Melodic, clean and confident. It’s a perfectly good song, if a little forgettable.

The side ends with the slightly epic The Rail Song, though the first minute of the nearly six-minute track is taken up with train sound effects. This kind of reminds me of early Red Rider. There’s loads of cool stuff here, but it’s a little too flowy and contemporary for my taste.

He kicks off Side 2 with Paint The Road, which I love. It sounds really difficult to play, and packs a lot of visceral Crimson within its ’80s jungle beat. It’s an instrumental, which is actually a great way to open a second side — like the song the band would play as they come onto the stage after an intermission. It features two lengthy soprano sax solos by Bill Janssen, who was basically Belew’s guy. Next is She Is Not Dead, which begins with a really unique and creative guitar/soprano sax thing before the vocals come in. This one has a lot of space in it and uses percussion rather than drums. I love this one.

Then you have Fish Head, which is a bit silly and jimmy-jokes, but it’s also kind of just a straight and simple song compared to what we’ve had for a bit. This song is the poster child for new wave ADHD. The stellar Ideal Woman is next, which features man-on-the-street clips (streeters or vox pops) recorded in Cincinnati. These clips are used as the verses, while Belew sings the catchy chorus.

The album wraps with Ballet For A Blue Whale, the title of which makes it suddenly dawn on you that this stuff has most certainly influenced The Rheostatics. This is a beautiful instrumental song, if a bit boring. It was performed entirely on a Roland guitar synthesizer and acoustic guitar.