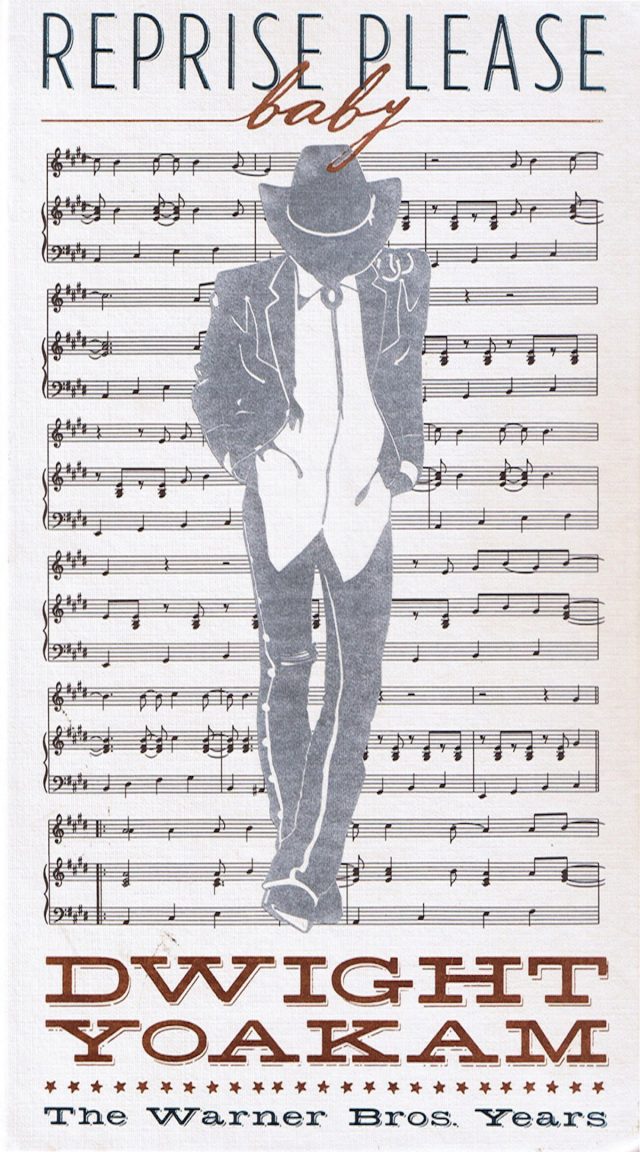 Don’t hate him because he’s purty.

Sure, Dwight Yoakam is a handsome cowpoke whose pouty cheeks and tight, strategically torn jeans make all the girls swoon. But as his extensive new four-disc retrospective box set Reprise Please Baby: The Warner Bros. Years handily proves, he’s much more than just some Nudie-suit Romeo for the rodeo set.

First, there’s his voice: A distinctive, high-lonesome yelp that’s smooth and smoky enough for the charts but twangy and tangy enough for the roots purists. Then there’s his songwriting style: An honest, down-home synthesis of backwoods Kentucky traditionalism, Sun rockabilly, Bakersfield honky-tonk and pop smarts that harkens back to forebears like Hank, Merle and Buck while keeping one cowboy boot in today’s world. Finally, there’s his sheer good taste: When Dwight wasn’t writing the hell out of his own songs, he was singing the hell out of somebody else’s classics.

Over the course of five hours and 87 tracks, Reprise Please Baby gives you ample evidence of all Yoakam’s assets. There are, of course, the self-penned gems like Guitars, Cadillacs, A Thousand Miles From Nowhere, Ain’t That Lonely Yet and Fast As You. And there are the fantastically cool covers of everything from Johnny Horton’s Honky Tonk Man and Roy Orbison’s Claudette to Queen’s Crazy Little Thing Called Love and Cheap Trick’s I Want You To Want Me. Better still, there are the odds ’n’ ends that didn’t end up on his 15 solo albums — a south-of-the-border version of Warren Zevon’s Carmelita from an album by Tejano accordionist Flaco Jimenez; an acoustic reading of the Hag’s Holding Things Together from a Merle tribute CD; a suitably lighthearted version of Rapid City, South Dakota from a Kinky Friedman tribute; a Western swing through Bob Wills’ New San Antonio Rose, backed by Asleep At The Wheel; and a low-riding revamp of ZZ Top’s I’m Bad, I’m Nationwide from this year’s Sharp Dressed Men disc.

Best of all for fans, there’s an entire disc of previously unreleased fare, from original 1981 studio demos of This Drinkin’ Will Kill Me, It Won’t Hurt, Miner’s Prayer, Bury Me (and others) to brand-spankin’ new tunes, including a languidly tragic acoustic-guitar rendering of Sin City by the late, great Gram Parsons. All in all, purty damn sweet.

NOTE: The box set isn’t streaming anywhere, so here’s a greatest-hits album from around the same time.