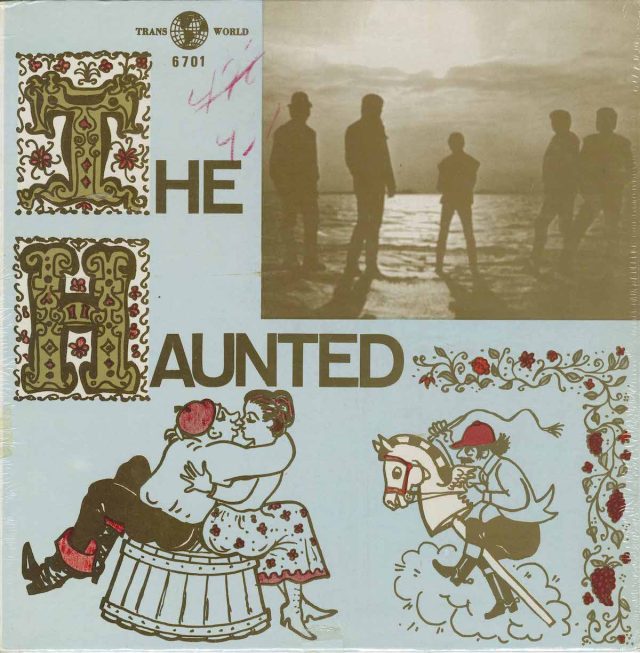 Two days after New Year’s 1966, the fledgling teenage garage rockers The Haunted took to the stage at the storied Montreal Forum to compete in a battle of the bands. (The Canadiens were out of town — defeating the New York Rangers 6-3 the day before at Madison Square Garden, having already downed the same blueshirts 5-1 “au Forum” on New Year’s Day.)

But they were no match for The Haunted, a rockin’ five-piece who won the competition — and with it, a chance to record an album for Quality Records. The first step was a single. They recorded and released 1-2-5 b/w Eight O’Clock This Morning — both original songs, the former eventually serving as the opening track on their debut album which I’ll walk you through in a minute.

That first single — currently available on Discogs for $200 — sold 8,000 copies and got them on the charts in Montreal and Kingston. So Quality had them go back to the studio and make another. This time they did a cover of Them’s I Can Give You Everything b/w the original No More Lovin’. This time they not only charted in Montreal, but in Sault Ste. Marie and Medicine Hat! Within a year of their Battle Of The Bands performance, they had been in the all-Canadian Top 10 for more than a month and had a fan club with thousands of members.

The self-titled debut album was recorded and released in 1967 on Trans-World Records, a Canadian label that was around from 1962-1973. Funny story — I bought my remastered copy of this album from The Record Centre in Ottawa. It was around $20. It was an online purchase, so I went to the shop and picked up the album in a brown paper bag and took it home to give it a spin. By the time I got home, I had several “missed calls” on my phone along with texts, messages and an email. Opening the brown paper bag, I figured out the reason before I checked the content of any of the messages: They gave me the original pressing by mistake. It’s worth $1,500.

The album isn’t on Spotify, but all the songs are. I made a playlist to emulate the original release:

It begins with a re-recording of the first single 1-2-5, a perfect proto-punk song about sex workers and street drugs with harmonica solos throughout instead of guitar solos. The song is devoid of tropes and cliches and has a proper ending rather than a fade out. Next we’re treated to a fast, heavy cover of Sam Cooke’s Shake.

Another original is next — a full-on psycho-punk raver called Horror Show. Way ahead of its time. It’s kind of like Bomboras mixed with The Seeds, Led Zeppelin’s How Many More Times and The Velvet Underground’s Sister Ray. Nobody would suspect this is from 1967. Nobody. If Paul McCartney had heard this instead of I Can See For Miles, he still would have written Helter Skelter — but louder.

One of my faves is next: The ballad Untie Me. I love it because of the vocal phrasing by Johnny Monk. Genuine, not overdone and perfectly hesitant. I wish all “we need a ballad” ballads were this good.

Flipping the thing over for Side 2, things begin with a cover of The Rolling Stones’ Out Of Time. This is the album’s weakest song. I know why they did it, but they needn’t have — Untie Me would have sufficed. Then we get Searching For My Baby, which was the band’s third single. It’s southern-flavoured and could just as easily be a Three Dog Night song as one by The Allman Brothers Band. Another cover follows this, a very faithful version of Message To Pretty by Love.

Twist is the penultimate number, and yes, you could twist to it. I don’t know who the harmonica player in the band is, but it really works. Twist is a frigging cool song because it has indecipherable lyrics. Perhaps it was their way of doing a bilingual song. It doesn’t sound French in any way, but more like a Bob Dylan parody. This one is short and sweet. 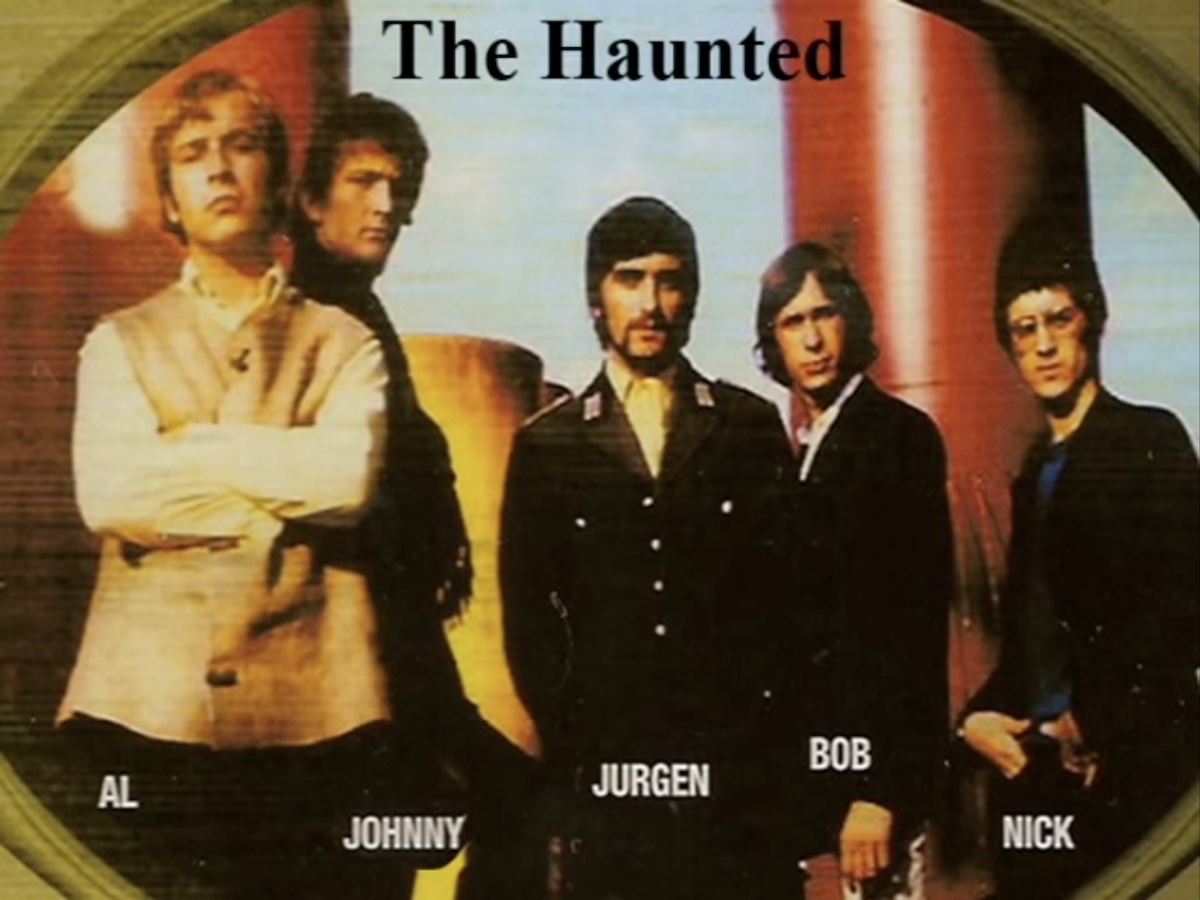 Then comes Montreal Blues, which is really Bessie Smith’s St. Louis Blues, but these kids were from the City of A Thousand Steeples, so it gets a name change. It’s the album’s only slow blues standard — and it has a really great guitar solo.

The album is an essential addition to your collection, especially if you like the garage rock of The Monks and Link Wray, or the loose pseudo-punk of The Kinks and The Cramps.

If you want to go a step further, the first Haunted album I ever got was Part Two: I’m Just Gonna Blow My Little Mind To Bits — primarily because of two fantastic covers. They do a version of The Music Machine’s Talk Talk called Pourquoi and also a cover of Jimi Hendrix’s Purple Haze, in French, called Vapeur Mauve. “Pardon, quand j’embrasse le ciel!”

The band folded in 1971. Jurgen Heinz Peter, a key founder and guitar player, passed away at home in Vancouver in 2017. 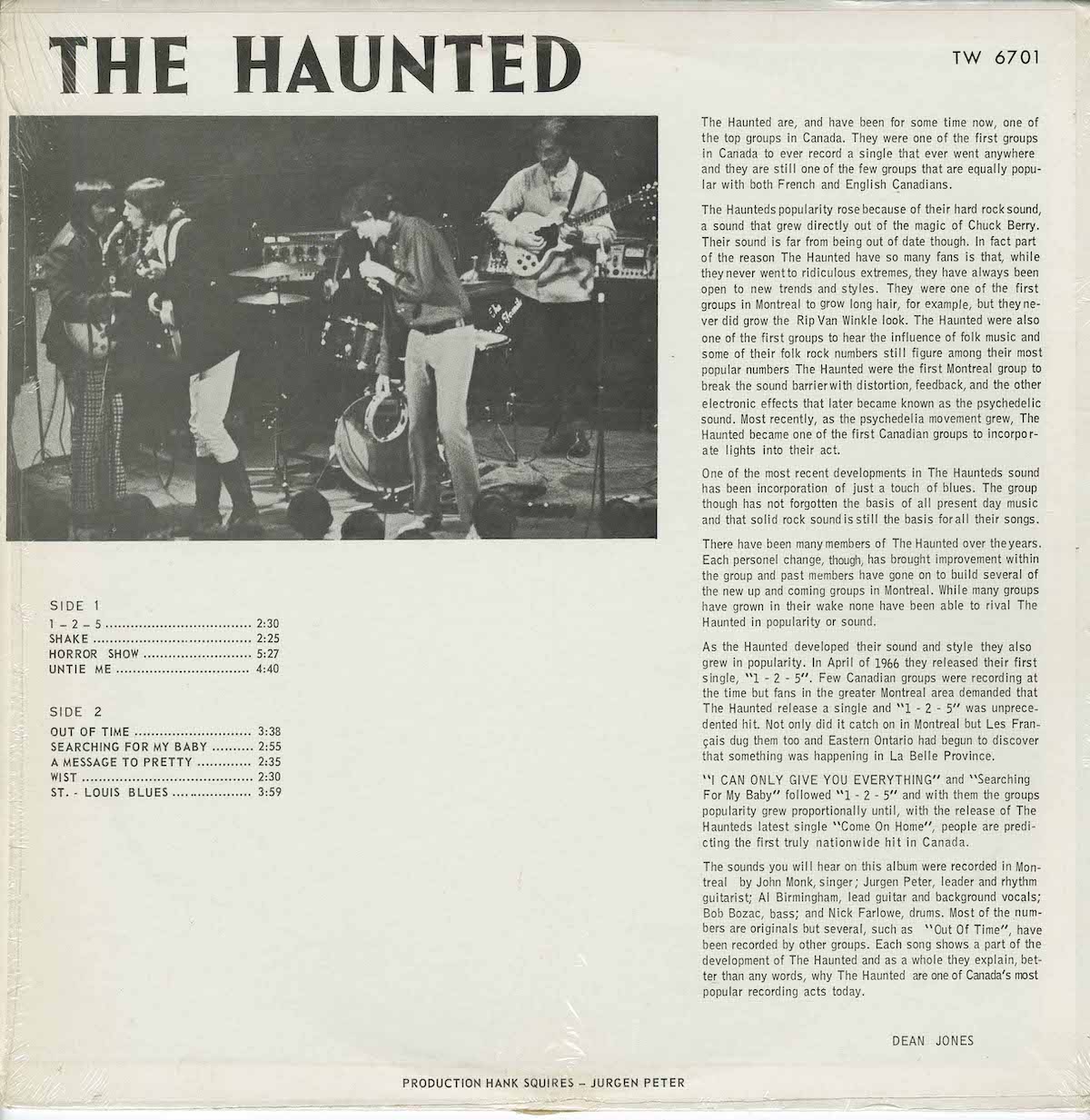