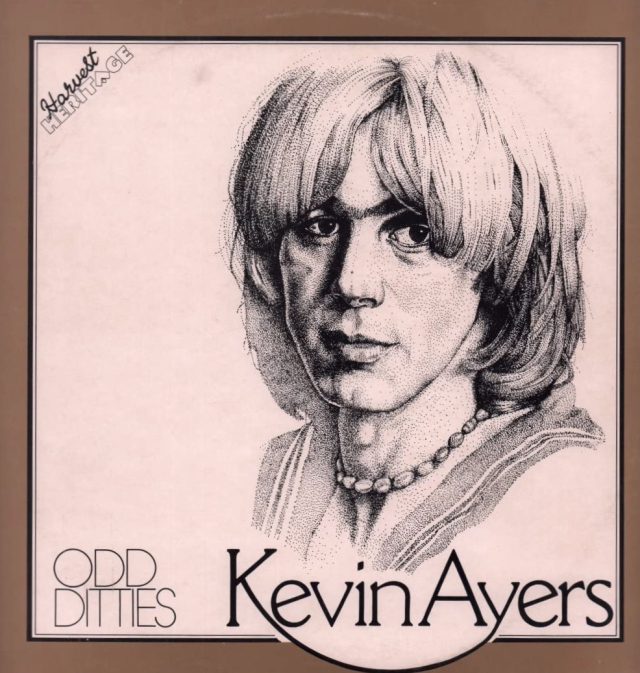 What does it say about a whimsical, true alternative artist when it seems their best record is an album of B-sides, rarities and unreleased songs? That their really weird stuff is better than their regular weird stuff, or that their discarded stuff wasn’t weird enough? Both, as it turns out.

I’ve bought a few Kevin Ayers albums, but Odd Ditties is the first one I’m going to keep. The non-Spotify 1976 compilation on the Harvest label is quite a lot like the Beatles Rarities album — you get some basic liner notes which tell you when the song was recorded, for what reason, and what ultimately happened to it. Those scenarios include: Intended for a particular album and then cut or left out, used as a short-run single or flipside, or simply shelved. All the songs were recorded between 1969 and 1973, his heyday, as it were.

Do you know who Kevin Ayers was? He was basically the other Syd Barrett — a pioneer of the British early psychedelic scene with a distinctive, deep voice. One of the founding members of The Soft Machine, like Pink Floyd’s Barrett, the bass guitarist and vocalist left the band after one album. 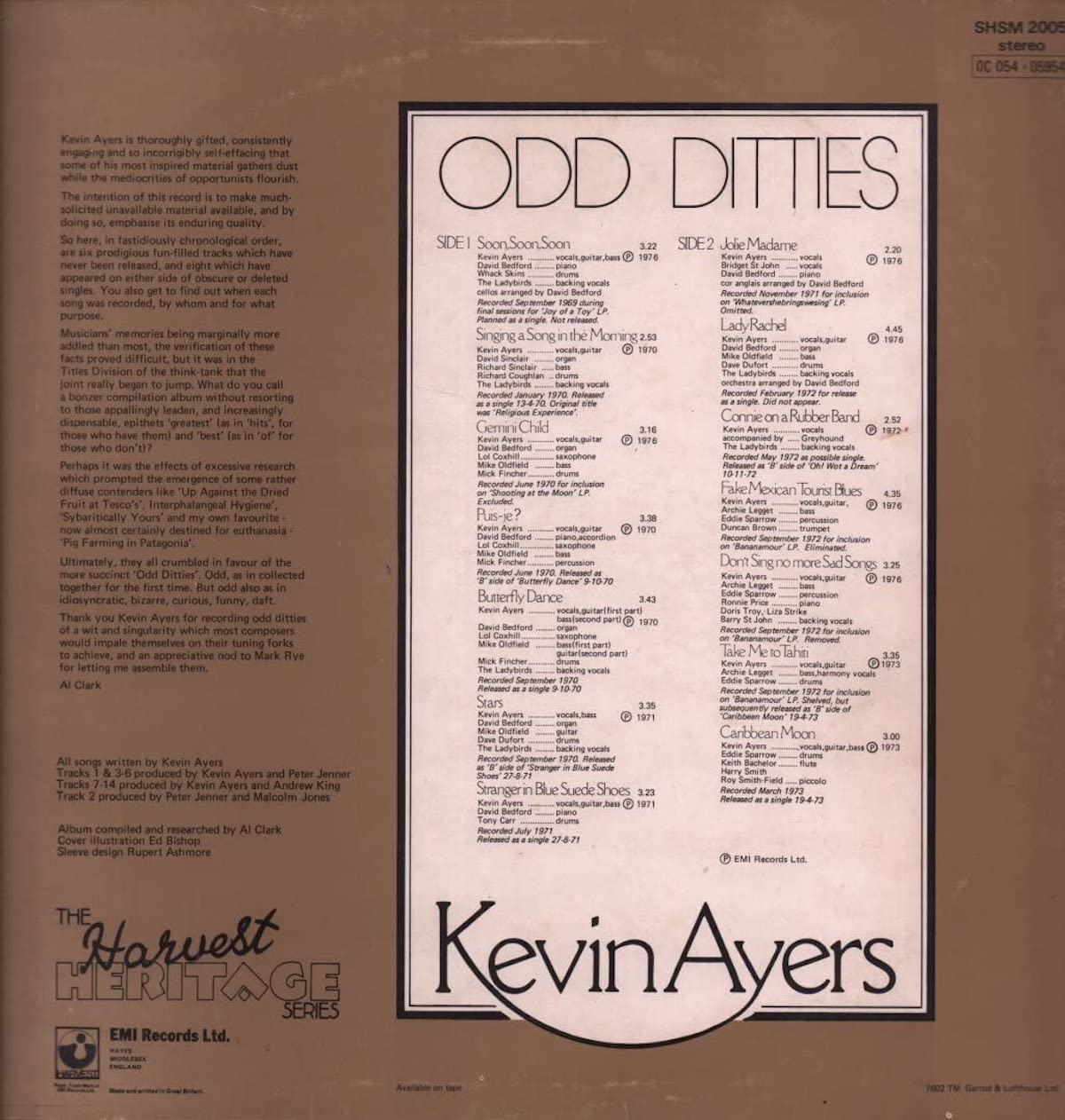 But while Barrett was quietly fired, Ayers simply tired of it. Raised as the son of high-ranking consulate staff, he lived in many lovely locales and moved around a lot — something which he kept doing in adulthood. Time and time again, just as Ayers seemed to be on the verge of stardom, he’d get distracted and bugger off by himself somewhere. When he passed away in his sleep at age 68 in 2013, he was living as a pseudo recluse in Montolieu, France — having recorded his critically acclaimed final album The Unfairground in 2007 with a cast of famous friends and fans. It marked a re-emergence after years of relative obscurity and occasional self-imposed exile, including some years which Ayers claims to have no memory of — specifically, 1978-1980 and the two albums he made during that time.

We all know brilliant people who are maddening in their approach or lack thereof. That was Ayers. Beloved and influential BBC DJ John Peel loved Ayers, saying he possessed a talent “so acute you could perform major eye surgery with it.” He was beautiful, too. A very attractive dude, in a hippie Peter Frampton kind of way.

Ayers’ music is as difficult to describe as that of his former Soft Machine bandmate Robert Wyatt. He has pop songs, R&B songs, novelty songs, psychedelic songs, folk songs, blues songs and rock. I tend to favour his more commercial stuff. There’s just something magical that happens when a woolly and wild creative mind tries to confine their genius to a crisp three-minute pop song. That includes the first song of his I ever heard — Singing A Song In The Morning — from the sessions for his first album, Joy Of A Toy in 1969. The song was released as a single and originally called Religious Experience. Some outtakes included a guitar solo by Barrett. The one on Odd Ditties features Ayers doing a very convincing Barrett impression. This is a 5/5 pop song. Impossibly catchy.

But the album opens with another song from this same session — Soon, Soon, Soon. It was intended as a single, but simply never released. It’s pretty cool, but dated. Fuzzy and heavy — buzzing guitars playing off against furious cellos, with spoken-sung vocals in the verses and a female harmony trio taking care of the choruses. There’s a very Barrettesque bridge. It’s a bit of an angry song, aimed at both materialism and the banal nature of workaday culture. It features Wyatt on drums, under the name “Whack Skins.”

The best song on the record is Gemini Child, an outtake from Ayers’ sophomore album Shooting At The Moon from 1970. How the hell did this get excluded from the album? The drumming on this is brilliant, by some guy named Mick Fincher who only ever recorded with Ayers, and even then just periodically from 1970 to 2013.

Next up is Puis-je? — one of two tracks sung in French. I don’t love this one, though it does have some cool bits. It was recorded and used as the flipside of the next track Butterfly Dance, which is much better than its name suggests. It starts off lovely and hippie-dippy before it stops and a rattling pair of cowbells signify a big change in tempo. What follows is just an excellent, rocking pop song. “Rock and roll music playing in my head. Gonna keep on dancing till I drop down dead.”

Stars is next. It was the flipside of Stranger In Blue Suede Shoes, which comes immediately afterward. The latter is about as straight-ahead as Ayers gets. If you like Robyn Hitchcock, you’ll love this. I haven’t checked, but I wouldn’t be shocked if Robyn has covered it. I love Stars. Another pop song, just as accessible, in fact — almost Three Dog Nightish, with frigging Mike Oldfield on guitar.

No other Ayers album of the ’70s has seven songs on a side. This one has seven on both. Just to give you an idea of the comparative simplicity of these tracks compared to the rest of his catalogue at the time.

Side 2 opens with the other French-language song, Jolie Madame — a piano ballad, mixing ’60s pop/folk with old Broadway. It’s a lovely duet with Bridget St. John, recorded to be part of Ayers’ 1971 album Whatevershebringswesing, but ultimately left out.

The next track, Lady Rachel, comes from the following year. It was intended as a single but simply never issued. It’s a re-do of the final song on Ayers’ debut Joy Of A Toy. There’s quite a good live version on YouTube from 1972.

Next is the island-flavoured curiosity Connie On A Rubber Band, featuring the U.K. reggae group Greyhound as his backing band. This could work in a Madness or Specials setlist. It was recorded to be a single, but instead used as the flipside of Ayers’ tribute to Barrett Oh Wot A Dream (not included on this compilation).

Next is the equally wonderfully titled Fake Mexican Tourist Blues. This one has a bit of a Jamaican feel as well, despite the stereotypical-to-the-point-of-racist lyrics and a sound meant to be Mexican. “Hey Juanita, Juanita banana. Hey Juanita, will you hold my banana?” The lyrics are a shame, because otherwise it’s a goddamn great song, even with the trumpets. Sometimes it reminds me of Guero by Beck.

This one, as well as the next two were all recorded to be on the 1973 album Bananamour. This one was “eliminated” while the ragtimey, almost Rocky Horror-esque Don’t Sing No More Sad Songs was “removed” and Take Me To Tahiti was “shelved.” Take Me To Tahiti is so very ’70s. Sun, drink, sand, planes. Lots of Cry Baby wah-wah pedal and slide guitar. In fact, there’s a monstrous pile of guitars on this track. Too many for the amount of different effects on each one. This is probably the album’s weakest track, and it needn’t have been — it even has a backward message!

The final track sticks with this island theme — Carribean Moon. It was recorded in March 1973 and hastily released as a single a month later. There’s even a video for it.

I don’t love it, but I love Ayers. He’s having fun — in a sailor suit with a big necklace and strumming a ukulele. No wonder he got caught a few months later with John Cale’s wife.

This bit aside, I think he’s a worthwhile inspiration — musically, for certain. But also a reminder not to take yourself too seriously, to put adventure first and be a genuine artist, wots and all.