Home Read Albums Of The Week: Bare Minimum | Is A Gateway Drug 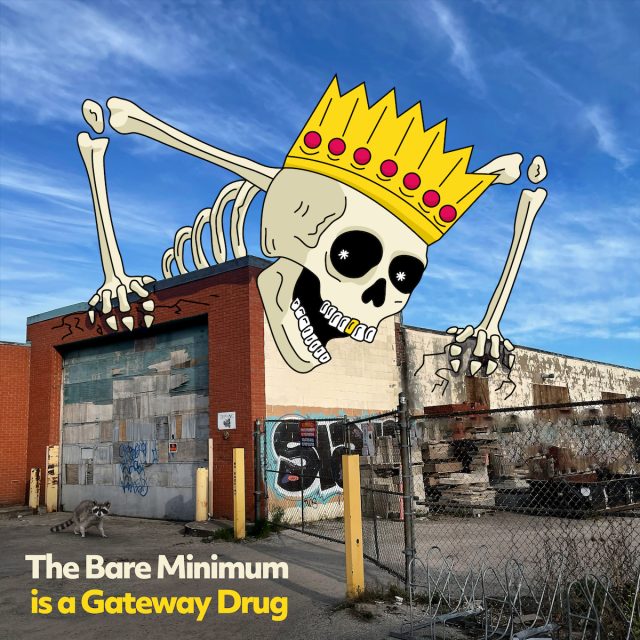 THE EDITED PRESS RELEASE: “Is A Gateway Drug is Bare Minimum’s third album. It includes six new songs and six previously released singles (Bonestorm, Scars and Stripes, Party Martyr, Echo In My Head, Bitter Pill and Woah). The album pays homage to ’90s skate-punk while avoiding the pitfalls of nostalgia. It makes sense that all of the musicians — guitarist Mick Hutchinson, drummer Chris Nikolaidis, singer-guitarist Cam Gray and bassist Donnie Hopper — grew up on a steady diet of Tony Hawk Pro Skater and Fat Wreck Chords.

Tracks like Conspiracy 2 (Shadowban) and Garbage In My Brain serve as meditations on misinformation and internet culture, while Stay At Home Son paints a portrait of adolescence extending into infinity. The Bare Minimum break up the predictability of melodic hardcore on Panic with drummer and bassist Chris and Donnie trading blast beats and guttural screams. The penultimate track Part Time Punks shows a more progressive side of the band, providing a meta-commentary on being a punk band during late capitalism.

Rising out of the underground Toronto punk scene, Bare Minimum channel but subvert skate-punk into something new. Equally at home at a DIY basement show or festival stage, they embrace the chaotic nature of punk shows, emphasizing energy over precision. The band are also actively involved in promoting the local scene; self-releasing a documentary about a local DIY venue, interviewing their scene peers on social media, curating playlists and working with local non-profits. Bare Minimum have played Pouzza Fest, Canadian Music Week and NXNE, and shared the stage with Meat Wave, No Fun At All and Adrenalized.

“We haunt the dive bars and DIY basement shows of Toronto, with our heavy but fun brand of punk,” they say. “Threaded together by frantically catchy hooks, landing somewhere between irony and nihilism, we subvert pop songs into meditations on bar culture, boredom, and scene politics. See you in the pit, or in the Nicolas Cage memes subreddit.”