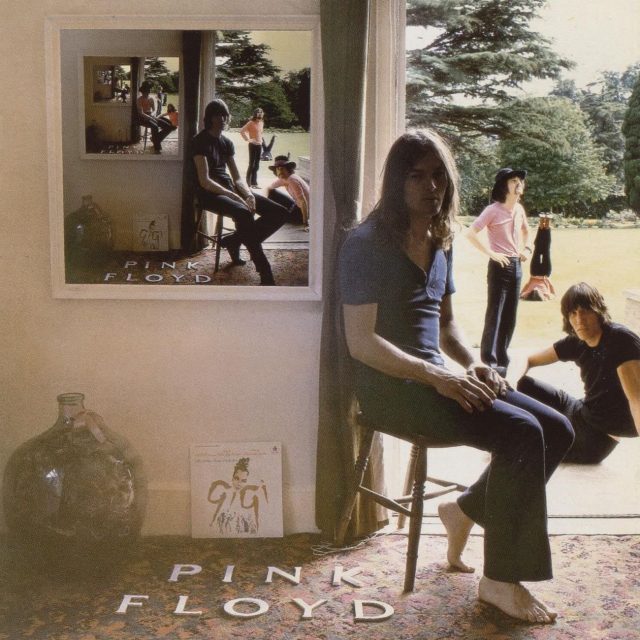 When you have a favourite band, sometimes you have records of theirs which you rarely play and don’t enjoy thoroughly enough to spin.

I’ve had a love affair with Pink Floyd since 1985 or so. I have all the albums, but there are a few which rarely get played anymore. Still, not only would I never part with them — I’d even consider buying a special edition. It’s an illness.

1969’s Ummagumma is one such album. This was Pink Floyd’s fourth release — a two-record set with both a live album and a studio album. Their previous release was the spotty soundtrack from the film More. Their next project — Atom Heart Mother — would be their first gold record. Ummagumma has gone gold, technically, but that didn’t happen until 1974 and was the direct result of Dark Side Of The Moon’s success.

The first thing to notice is the excellent live album begins with the same version of Astronomy Domine as on 1973’s A Nice Pair — a repackaging of the first two albums. Curious. I have no idea why this was done. There could be three reasons: They messed up; they didn’t want to pay former bandleader and principal songwriter Syd Barrett performance royalties; or they preferred this version. No question about it, the live version is incredible. The Ummagumma and A Nice Pair version features the group, but primarily David Gilmour singing the atypical Barrett masterpiece. The live tracks were recorded April 27, 1969 (my father’s 42nd birthday) at Mothers Club in Birmingham. Mothers was a second-floor venue above a pair of shops. Formerly a furniture store and then the Carlton Ballroom, it closed in March 1971.

Filling out the rest of Side 1 on Ummagumma is the moody and explosive concert staple Careful With That Axe, Eugene. The song, which was the flipside of single Point Me At The Sky, was never on a studio album. It was issued on the 1971 compilation Relics. Originally called Beset By Creatures Of The Deep, Floyd re-performed the song as Come In Number 51, Your Time Is Up for the Zabriskie Point soundtrack in 1970. There’s quite a good live rendition of it in the 1972 French film Pink Floyd at Pompeii. The Ummagumma version is the best one — brooding, gloomy and chill until midway, when the title phrase is spoken by Roger Waters. “Careful, careful… careful with that axe, Eugene,” he says, followed by one of his inimitable long screams, signalling a big drum fill and an extended, explosive jam. It rounds out an absolutely unimpeachable first side of the album.

Side 2 begins with another concert staple — one which Waters still performs. Truthfully, as much as teenaged me loved playing the main bass riff, Set The Controls For The Heart of The Sun is boring. Originally released on Floyd’s sophomore album A Saucerful Of Secrets, it lumbers along with the type of tiresome, whispered lyrics found in abundance on the More soundtrack. The song would be more effective at twice the speed, or covered by Portishead. But fans love it. I don’t smoke weed, so what do I know?

Next (and last) on the live album is the epic Saucerful Of Secrets. Originally titled The Massed Gadgets Of Hercules, the song is broken down into four main sections: Something Else, Syncopated Pandemonium, Storm Signal and Celestial Voices. I’ll break it down for you — it means four minutes of moody malleted cymbals and chimes, followed by a quick, cool drum pattern with squealing guitar and percussion for three minutes, then it chills out for a minute and a half before the final section, which is the best part — a gorgeous Rick Wright organ and Mellotron progression with Gilmour singing the wordless melody overtop. For me, it’s a bit much. Epic, self-indulgent and not musical enough until the final four minutes. The Ummagumma version is just shy of 13 minutes. Seeing it performed is better than hearing it. You can do that, once again, via Pink Floyd At Pompeii.

So, the live album is 50/50 for me. Side 1 is amazing. But even though the two tracks on Side 2 are bona fide classic psychedelic Floyd, I don’t ever need to hear them again.

On to the studio album … goddamnit. Speaking of self-indulgence, the idea here was for each of the four members to conceive and lead something of their own. The results are mostly awful. It begins with Wright’s epic and boring Sysyphus. Curious spelling. The main melody is an ominous, dark death march which mercifully dissolves into a rather pleasant instrumental piano piece before the playing gets erratic and avant-garde. This is where I typically lift the stylus. The next section is similar, sounding like randomly plucked piano strings in time with kindergarten percussion. It’s annoying. Next there’s a Mellotron and organ bit which starts off quiet and gloomy and gets louder & louder before finally, mercifully, returning to the opening death-march theme. It’s bullshit.

The next two tracks are Waters’ contributions. First is the lovely Grantchester Meadows, named after a green space in their hometown of Cambridge. It’s the best song on the studio album. It’s followed by an insane show-and-tell track, the wonderfully named Several Species Of Small Furry Animals Gathered Together In A Cave And Grooving With A Pict. The “song” has two parts — the beginning is a bunch of simulated rodent and animal sounds, microphone tapping and clicking accompanied by a sort of psychedelic beat-boxing — all performed by Waters. If that wasn’t bonkers enough, it devolves into the final bit — Waters shouting in an exaggerated Scottish burr.

I can’t help but wonder what producer Norman Smith made of all this. It’s well-known that while he was The Beatles’ engineer, John Lennon used to call him Normal Smith. So of course when Smith wrote an autobiography he called it John Lennon Called Me Normal. Sigh.

This was the last album he produced for the Floyd, for whom he actually has one performance credit — drums on Remember A Day, from Saucerful Of Secrets. Just as producer Jimmy Miller did on The Rolling Stones’ You Can’t Always Get What You Want, Smith stepped in to help a frustrated Nick Mason. Speaking of Mason, Side 4 of Ummagumma features his heinous songwriting contribution to the album — the pretentious, three-part Grand Vizier’s Garden Party. A Vizier, in case you’re wondering, was the highest-ranking political advisor to the Pharaoh in ancient Egypt.

The song, which closes out the album, begins with a flute introduction before we are subjected to several minutes of amateur timpani playing. Or, what seems like timpani playing — tuning up and down of some sort of drum — accompanied by cymbal crashes and other toms, the playful tapping of a wood block and lord knows what else — absolutely drenched in reverb to sound like it was performed in a concrete silo. Eat your hearts out, Great Lake Swimmers. It descends into a raucous overdubbing of drum fills before returning to the flutes for the outro.

The last side begins with Gilmour’s contribution, the frustrating The Narrow Way. And, of course, it has three parts. I actually really like this piece. It opens with a cool backward effect before jumping right into a soundtrack-sounding multi-tracked acoustic guitar piece with slide overdubs, once again sopping with reverb. Part 2 is a villain-sounding instrumental electric guitar riff set to a jungle beat. This again could be in a soundtrack, perhaps for a monster movie aimed at kids. A giant lizard perhaps. This eventually devolves into noise before Part 3 begins: The only song on the record which sounds like Pink Floyd. Well, 69-72 era soundtrack Floyd. It features an excellent lead vocal by Gilmour and some wonderfully sloppy and loud drum fills. It would have benefitted from a soaring Gilmour guitar solo, but he wasn’t really doing those yet. Nonetheless, this is how the album should have closed.