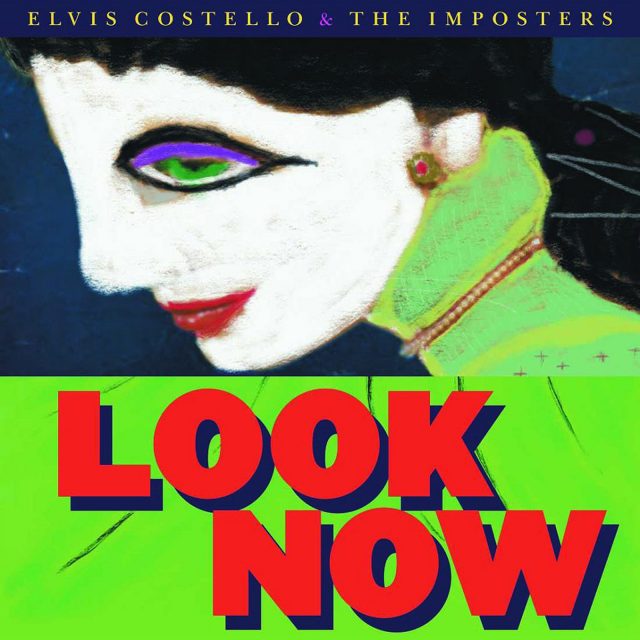 His aim is still true. He’s just pointing in a different direction these days. And no wonder. After all, it’s been more than 40 years since Elvis Costello released his first album. A decade since he last recorded with The Imposters. And five years since his last album, The Roots collaboration Wise Up Ghost. And over that time, the restless artist has dipped his toes into everything from country to jazz to classical, roots and hip-hop. So the Costello of 2018 is a long way from the angry young man of his early days. But make no mistake: The prolific singer-songwriter hasn’t lost a step — either as a songwriter or a vocalist — on his umpteenth studio set Look Now. If anything, he’s retracing those steps, consciously drawing on elements of his past and returning in some measure to what he calls the “uptown pop” of albums like 1982’s Imperial Bedroom and his 1998 partnership with Burt Bacharach, Painted From Memory. Elements of the former aren’t hard to spot. They’re on obvious display in these superbly crafted tracks’ sophisticated instrumentation and arrangements, which layer sweet strings and chirpy brass over top of his minor-key melodies, intelligent lyricism and romantic yearning. And the influence of the latter is no surprise, given that Bacharach co-wrote and contributed to a few of these cuts, including the title track and the torch ballad Photographs Can Lie (though, honestly, the Steely Dan-ish Carole King co-write Burnt Sugar Is So Bitter might be more of an attention-getter). Whether the style in question is soul, jazz, pop, rock or something between, Costello and his Imposters (which includes long-serving pianist Steve Nieve and drummer Pete Thomas, along with comparatively new bassist Davey Faragher) rise to the occasion with their usual dexterity, grace and style, ensuring Look Now is compelling and tasteful from stem to stern. Bottom line: If you haven’t paid attention to Costello for a while, now’s your chance to give him another look.