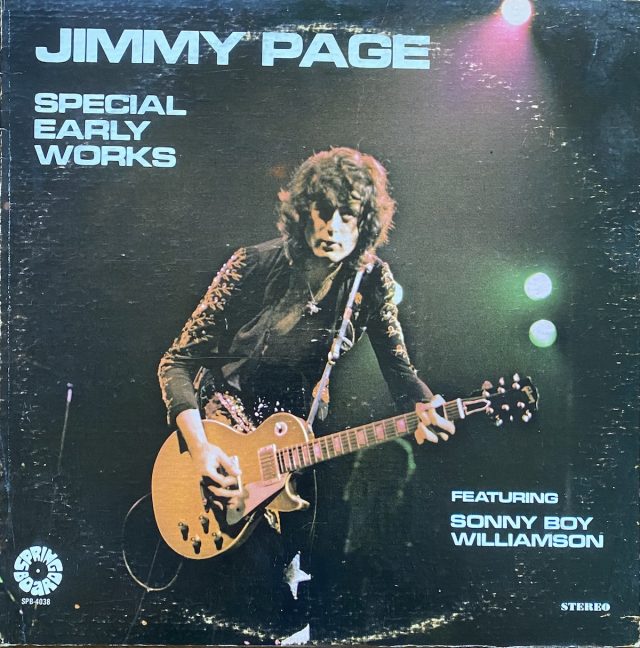 I had seen this damn record around for years and finally bought it off a pal for $5 earlier this year.

This pressing is an American one from 1975, but there are a bajillion different variants because it’s heavily bootlegged and the recordings were cheap to acquire — at a time when Jimmy Page was anything but. Led Zeppelin were HUGE in the mid-’70s and those in the fringe of the music biz hoped digging up tracks from Page’s session days was going to make them rich. It’s a similar story to those Beatles Live At The Star Club in Hamburg albums, except for one thing — and let’s be clear — this is not a Jimmy Page album. And it has nothing whatsoever to do with Led Zeppelin, even though the cover photo on my copy is certainly from a Zeppelin concert in 1973.

This is a Sonny Boy Williamson album, and a very loose one at that. It’s a live-off-the-floor jam session with no overdubs or redos. Also, I should be clear, we’re talking about Sonny Boy Williamson II, not the original Sonny Boy who died in the 1940s. This one died in his sleep of a heart attack less than four months after this recording, which happened on the 28th of January 1965 at IBC Studios in London, U.K. It’s a pretty famous studio. Many famous compilations were mixed and put together there, but it’s also where Deep Purple’s In Rock was done, along with For Your Love by The Yardbirds, The Who’s My Generation, Cream’s Wheels Of Fire and Goodbye, as well as both Odessa and Trafalgar by The Bee Gees.

Assembled in the studio that day — from 10 a.m. to 1 p.m. — were Williamson, the 21-year-old Page, organist Brian Auger, Ricky Brown (aka Ricky Fenson) on bass, drummer Mickey Waller of The Bluesbreakers and The Jeff Beck Group and sax players Joe Harriot and Alan Skidmore. Harriot was a free jazz innovator who died young of cancer in 1973 while Skidmore survives to this day, and has played with everyone from Alexis Korner and John Mayall to Kate Bush and Van Morrison. 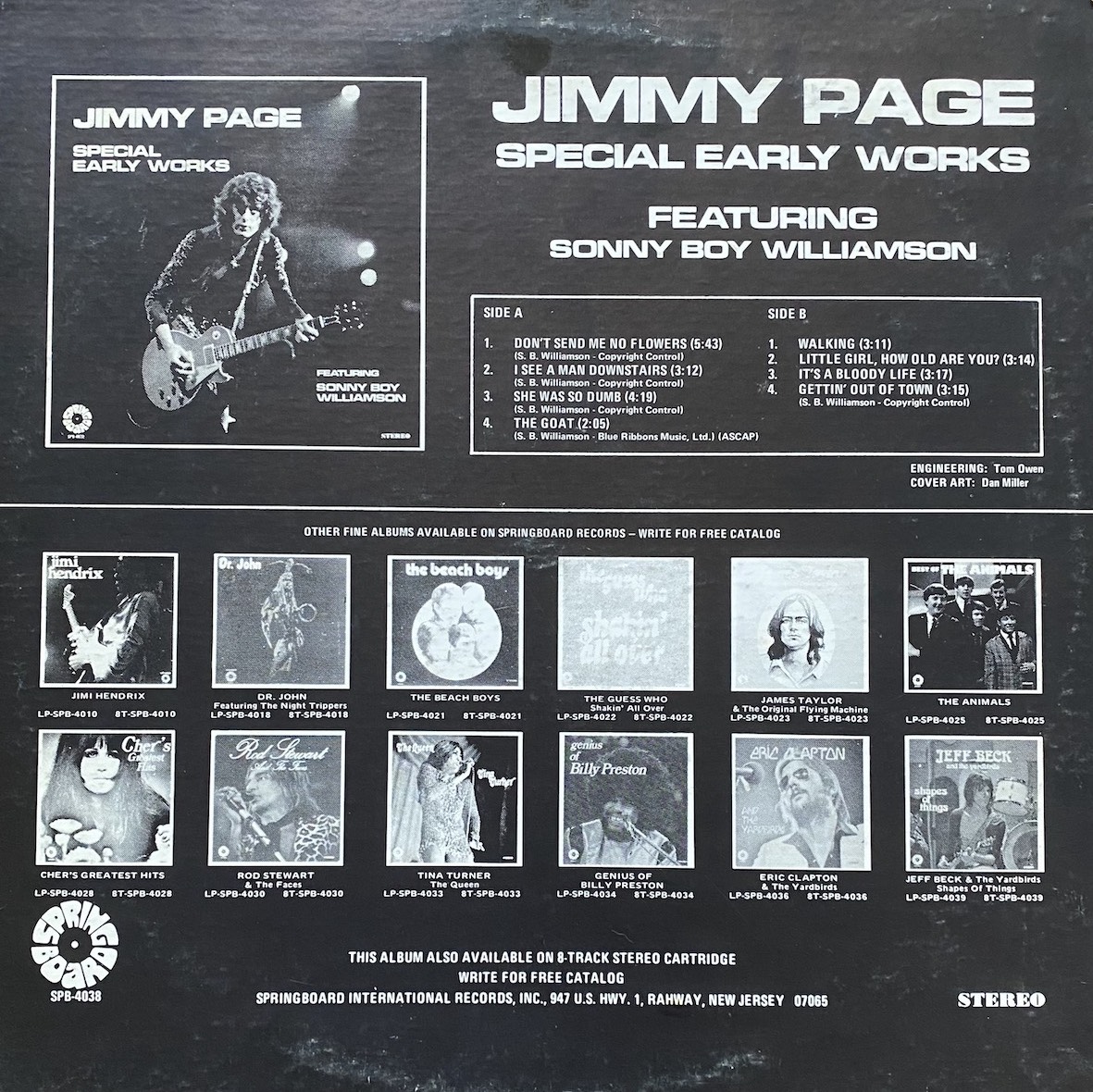 The least successful musician appears to have been Brown/Fenson, and frankly it’s evident why in the recordings. At the very least, he may have been unprepared — but Williamson was also renowned for being difficult to follow. Page said he and Williamson had actually rehearsed the material a few days earlier in the elder bluesman’s manager’s apartment. But by the time they set out to record, Williamson had forgotten all the arrangements. Sitting in a circle, with Sonny Boy getting drunk, they still managed to make a 25-minute album in three hours.

So what’s it sound like? That depends on what pressing you have. Mine is pretty good, but apparently some are awful. The album is known by many names — Special Early Works, Jimmy Page + Sonny Boy Williamson Vol. 8, Don’t Send Me No Flowers, Jam Session, It’s A Bloody Life and Jimmy Page, Sonny Boy Williamson & Brian Auger. Apparently, the early pressings of Jam Session and Don’t Send Me No Flowers have the best sound.

So, here’s the music. It all kicks off with the would-be title track Don’t Send Me No Flowers. It’s a curious opener — slow and with soft-spoken vocals. For those who bought the record thinking it was a Page album, he’s hardly heard at all on this track. Quite the contrary on the second song, I See A Man Downstairs, one of three tracks with a Page guitar solo in it. This solo, like all of them, is performed clean-tone and quite great.

Up next is She Was So Dumb, which would have been my favourite when I was a kid. It’s funny, in a Black Monk Time kind of way. It has multiple organ, sax and harmonica solos, but nothing from Page beyond some cool bluesy lead guitar noodling on the verses. The Goat closes Side 1 and I’m guessing this may be one of the tracks from later in the session, after Williamason had a few drinks. Most of the lyrics are unintelligible. No solo from Page, but Auger’s organ part is insane. I love it.

Walking Out kicks off Side 2. I would have put this song as the album-opener myself. It’s great and one of the tightest performances captured in the session. It’s Brown/Fenson’s best bass track on the album. As for Page, he has some cool lead accents on this one. Little Girl, How Old Are You is next, and in contrast to Walking Out, this one seems made up on the spot. It’s definitely a jam involving experienced players, even though it starts off very creatively — on the backbeat before switching to double-time 4/4. It also has a rippin’ solo from Page. So too does the next song, the novelty-type It’s A Bloody Life, reminiscent of Willie Dixon’s Spoonful. While the Page solo is great, the bass playing is rather awful. The album closes with the boogie number Gettin’ Out Of Town, which has a few cool bluesy turns on guitar, but the prominent solos are taken by the saxes and Sonny’s harmonica.

All in all, I give the album three stars. Williamson is a legend and this record is sopping with character and the love of playing.