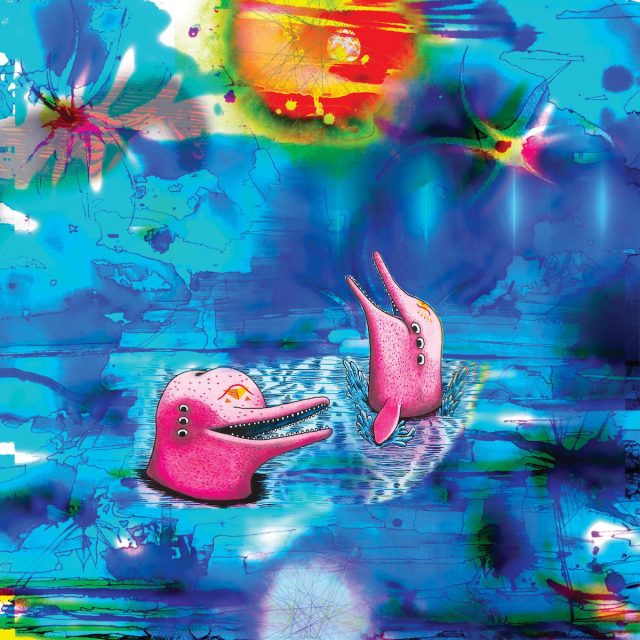 THE EDITED PRESS RELEASE: “Jaimie Branch and Jason Nazary are Anteloper. When prompted about their name, Branch retorts: “An Anteloper, is an antelope interloper,” adding in a jovial manner, “an antelope walks up to a party, but you know, people don’t want him around.” Turns out, she had the name before the band was formed, and once the duo started rehearsing, it was apparent that THIS was what an Anteloper sounds like.

Another creature pops up in the title of the duo’s new album: Pink Dolphins. Branch explains that the name is in part a nod to her Colombian heritage (from her mother). “There’s these amazing pink river dolphins that live in the Amazon — they can swim in salt water, they can chill in fresh water, or they can rock in mixed up brackish waters. They are uniquely ‘aquadelic’ in that way. Aquadelic and super endangered.” In many ways Branch and Nazary are like those dolphins — adaptable to varied terrain and moving in many directions through sound.

The Pink Dolphins album artwork is by Branch too, a primarily ink-and-gouache based artist who notes that this was the first time she treated her paintings with hefty digital processing. She’s collaborated, again, with John Herndon (of Tortoise fame), who she worked with on album covers for her first two Fly Or Die releases, and who has also done several tattoos for her. This isn’t the only Tortoise connection, though. Pink Dolphins is a new benchmark for the duo, not least because of the involvement of Jeff Parker, whom they recruited to be producer for the record in 2019. Parker notes: “I was immediately excited … Anteloper has a very unique sound and chemistry, and I love the spirit behind everything that they’re doing.”

But before we get into the new album in full, a quick recap: Nazary and Branch first met musically in Boston in their late teens. Their previous two albums — 2018’s Kudu and 2020’s in-progress report Tour Beats Vol. 1 — both acted as ‘proof-of-concept’ experiments, merging synths, raw experimental desktop electronics, gadgets, and efx with the energy and attitude of punk and an insatiable thirst for extended outer space jams. Branch works with her band Fly or Die and has also appeared with Exploding Star Orchestra, TV On The Radio, Matana Roberts, William Parker and many others. Nazary released a solo album, Spring Collection, last year, and has appeared with Helado Negro, Bear In Heaven, Little Women, Desertion Trio and many others. 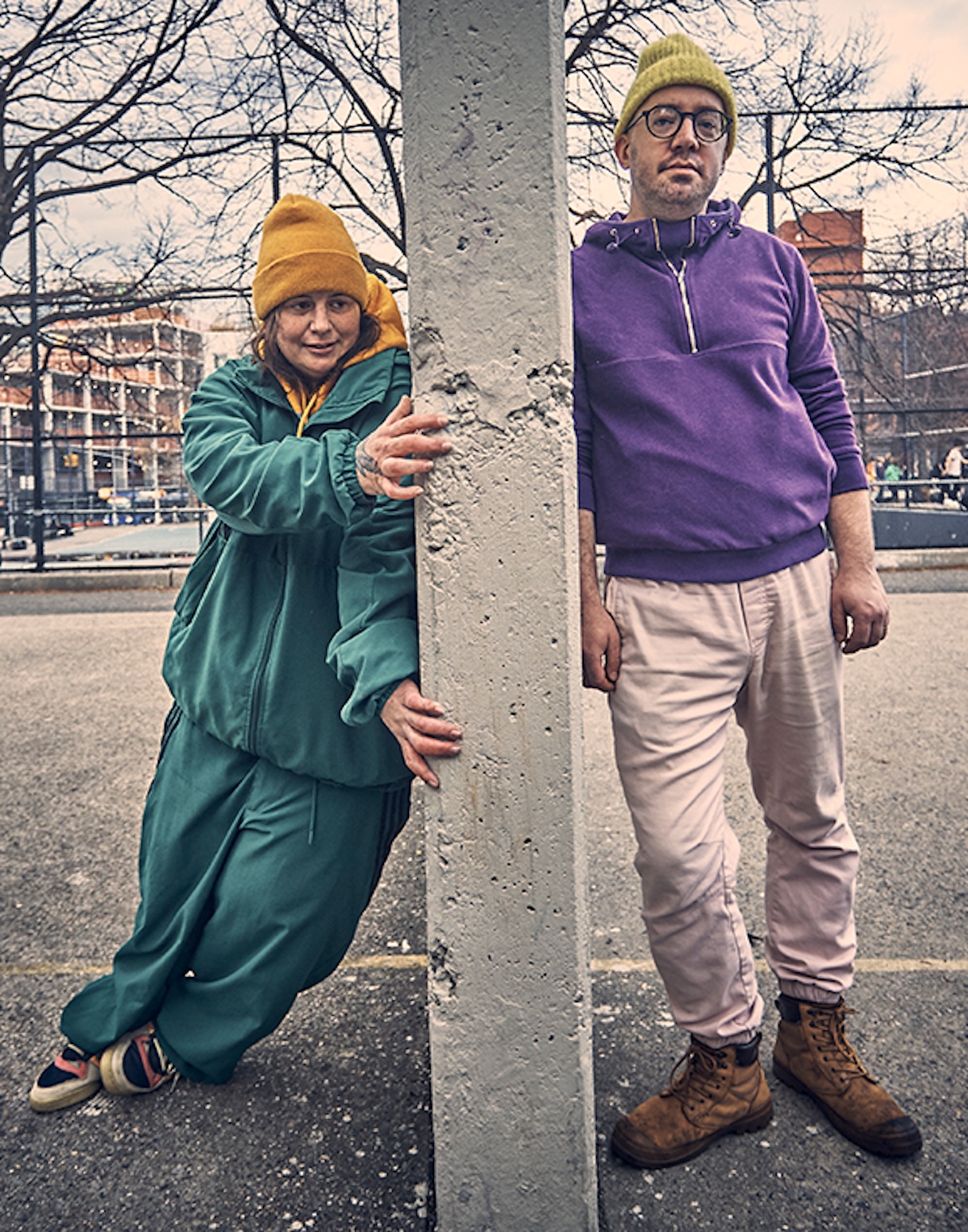 There’s something undeniably now and new about Anteloper’s current work. It channels a wide array of expressions from the kosmische musik / post punk opener Inia through the seismic, spectrum-saturating closer One Living Genus. Anteloper blaze rarely trodden trails through a cross- pollinated wilderness of electronics and jazz. And though one might assume that jazz and electronics are common genre interactions these days, Anteloper’s experiments mine deep into underexplored spaces between lexicons.

There’s also a punk aspect to Anteloper — Branch makes this clear when she says “I’m coming from punk. We’re both coming from punk!” — and you can really feel that energy in their DIY, do or die approach. Additionally, they embrace a bit of pre-punk, contrarian innovation energy like Miles Davis on Live Evil — a benchmark album for both musicians. Speaking of Miles: His trumpet solo on Green Dolphin Street (dolphins again!) was the first solo Branch ever transcribed, and Nazary says that when they first started playing together, he wanted to cover Little Church (in part because of Airto’s playing). Branch also notes that Parker cites Live Evil as one of his favorites. In fact, Parker played a sort of Teo Macero role for Anteloper on Pink Dolphins.

Parker explains: “The source material that was initially sent to me was many, many hours of improvised sessions that needed to be sifted through. It was overwhelming! So eventually Anteloper went back in the lab and edited the source material down into smaller chunks, and we went from there. It took me a long time to find a groove with it … I spent many months experimenting with different techniques and ideas. I would send them tracks, they would add to it and send it back. It was definitely a challenging way to make a record. I learned a lot. It was worth it!”

Nazary notes that their growth as a duo has really come about as they have refined their relationship with electronics: “The other step for us is how we are interfacing — how I am using the drums to control electronics. I’m always looking for a different way.” Branch references early influences Sun Ra, Mouse on Mars and J Dilla, and later influences from Moor Mother, Harriet Tubman and Sam Newsome. She cites the importance of electronics to her as exploratory instruments, both in sound and technique. Nazary notes that his drums/electronics rig is “really a cyborg setup, the machines influence me as much as I do them.” Then he surprisingly picks one big electronic band as his key inspiration “I love Autechre! That record Confield and Draft 7.30 — that’s it; that’s how I want to sound on the drums!” 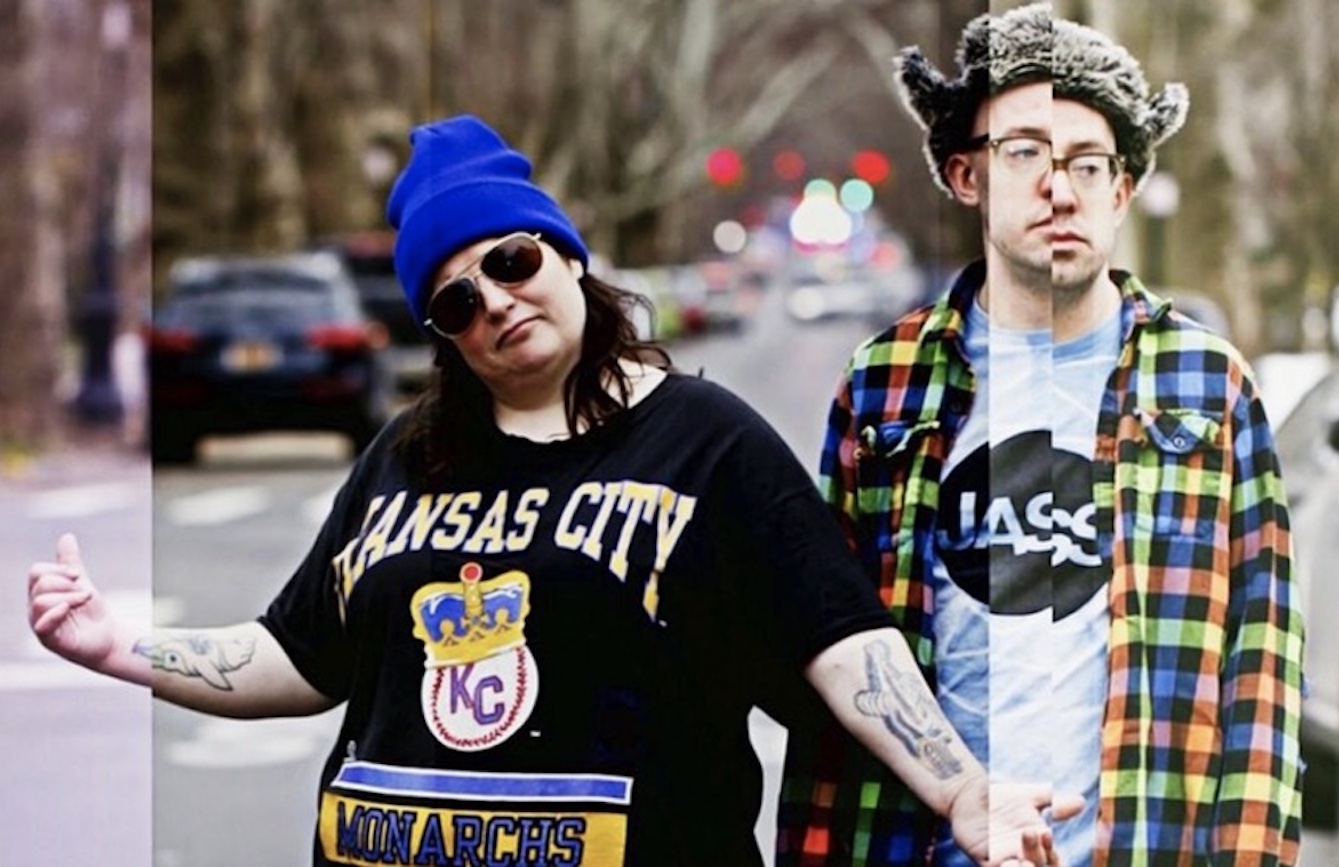 Speaking of a different way, right in the middle of the album is Earthlings, a heady banger of sci-fi slow blues featuring Branch on vocals (a first for her in Anteloper). As for how it came together, Parker and Branch tell different sides of the same story. Parker starts: “I made a four-bar loop from one of their improvisations, and it was banging.” He sent it to Branch, who recalls: “I was lightly tripping on LSD and checking out Jeff’s loop when the melody came to me.” Fresh off the failure of a friendship, the lyrics came partly as a reaction to the fallout (‘Make you / Make sense / It makes sense’), as Branch explored “knowing what time it is with somebody and trying to force it to make sense, but you know it’s not going to necessarily make sense.” Parker says when she sent the lyrics back, he had already extracted a loop from one of their improvisations and “played a little Kenny Burrell-esgue guitar on it. I smashed the two things together, and away we went. It was done right after George Floyd and everyone was in the streets, right at the height of Covid, etc. I think there’s a subtle message in Jaimie’s lyrics.” Earthlings also carries some of the raw post- Tropicalian heft of the late Brazilian samba queen Elza Soares’s later work — namely from the final album she created while of this Earth, A Muher do Fim do Mundo (The Woman At The End of The World). Though Branch notes it wasn’t directly an inspiration for Earthlings, the sonic and spiritual connections are no surprise, considering Branch collaborated with Soares in a wild experimental meeting for Rewire Festival in 2021.

Intentional or not, the ghosts of Tropicalia are also conjured on Pink Dolphins’ closer One Living Genus. It’s an expansive (nearly 15 minutes!) movement of futurist psychedelia — loud, direct, impatient, impolite, pushing for progress — that recalls the colorful, uncompromisingly creative and revolutionary spirit emanating from Brazil in the late 1960s, but vibrates more like the modern cultural diffusion of the New York city that the band calls home. Nazary feels the track sees them “fully exploring those underwater cavernous sounds, the drums dropping deep bass pillars, while Jaimie’s synths swim circles in and around. Jeff’s production brilliantly captures both the stillness and constant motion in our sound, ever evolving but always rooted in the genus.”

What makes this album special is the way that this duo bravely abandons the known as they leap forward into a path less-travelled. There’s no pre-made template here, only sound. Only a starting point, the destruction of that point, and the telepathic creation of a new way out. The electronics incorporated by both players are navigational devices, transportation sound-crafts. The resulting output is freewheeling, other-worldly, improvisational music, inspired by the unknown and at home in the astro-world. But the driving force behind Anteloper’s psychedelic space music is not escapism, rather a complete immersion in the hyperreality of the present. Their music is made for destroying concepts of past and future, for confronting and embracing the moment, for the betterment of the here and now. It’s music that is as rare and bewilderingly beautiful as the aquadelic pink dolphins surfing through the Amazon River.”