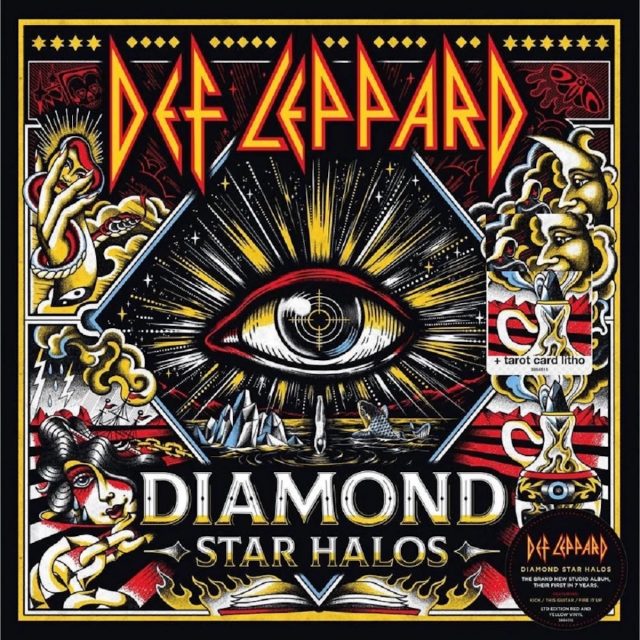 Over the past two years, the U.K. quintet — Joe Elliott (vocals), Rick Savage (bass), Rick Allen (drums), Phil Collen (guitar) and Vivian Campbell (guitar) — recorded Diamond Star Halos simultaneously in three different countries, with Joe in Ireland, Sav in England, and Phil, Vivian, and Rick in the United States. Without the pressure of timelines or a fixed schedule, they poured all of their energy into crafting 15 meaningful tracks with a mixture of classic spirit meets modern fire.

Thematically, they nodded to their earliest collective influences such as David Bowie, T. Rex and Mott The Hoople, among others. The title itself notably references T. Rex’s Bang a Gong (Get It On). However, they didn’t embark on this journey alone. Grammy-winning artist Alison Krauss lent her instantly recognizable and angelic voice to This Guitar and Lifeless, while David Bowie pianist Mike Garson performs on Goodbye For Good This Time and Angels (Can’t Help You Now).

To herald the arrival of Diamond Star Halos, Def Leppard shared the rip-roaring single Kick. The song thrusts into an anthemic stadium-ready frenzy, with driving guitars and bombastic drums woven into its musical fabric. Meanwhile, the chorus has all the makings of another iconic Leppard hit with its skyscraping vocals and melodies the band has become synonymous for.

The artwork for Diamond Star Halos is art in itself. The design recalls the instantly recognizable album covers from their celebrated past. With images by world renowned photographer and director Anton Corbijn, styling concepts by Maryam Malakpour and graphics by the U.K.-based Munden Brothers, the design truly follows the band’s influence through their eyes today.”