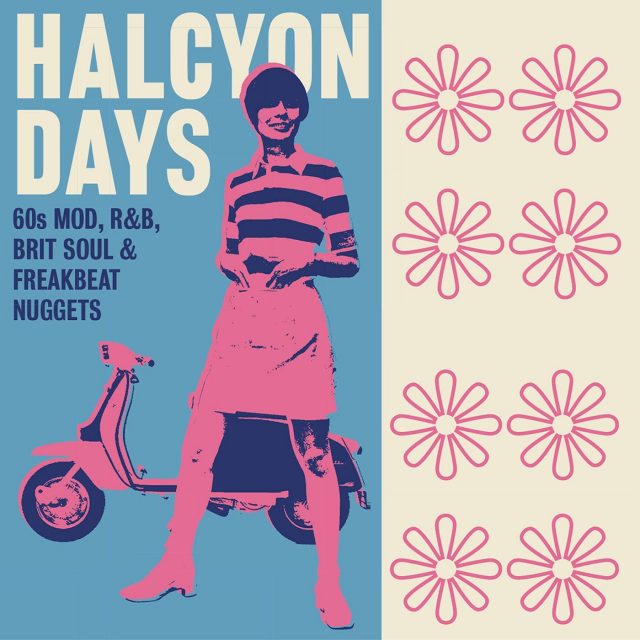 THE EDITED PRESS RELEASE: “Halcyon Days charts the development of mod-friendly beat music across three CDs — from the jazzy R&B of Chris Farlowe, Duffy Power with Graham Bond and Zoot Money through horn-laden Brit soul from Jimmy James, Geno Washington and The Richard Kent Style, ska from Mickey Finn & The Blue Men, girl group pop from The Chantelles, and on to fuzz-drenched freakbeat from The Pretty Things and The Worrying Kynde, and psychedelia by Jason Crest, July and Dantalian’s Chariot. Some other bands featured include The Animals, The Yardbirds, The Kinks, The Creation, The Action, The Artwoods, John’s Children, The Spencer Davis Group, Brian Auger & The Trinity and The Fleur De Lys.

There are early singles from future superstars David Bowie and Rod Stewart, plus early recordings from Jimmy Page with Mickey Finn & The Blue Men and alongside Jeff Beck in The Yardbirds, Steve Howe in The In Crowd, Greg Lake in The Shame and Jack Bruce and Ginger Baker in The Graham Bond Quartet. Mick Fleetwood drums for The Bo Street Runners, future Deep Purple guitarist Ritchie Blackmore backs Heinz, his bandmate Jon Lord is organist in The Artwoods, Rolling Stones bassist Bill Wyman produces The End and Denny Laine (later to join Paul McCartney in Wings) sings with The Moody Blues.

Producer Mike Hurst opens his archives, allowing us to include freakbeat nuggets from The Australian Playboys, The Human Instinct, The Favourite Sons, Double Feature and The Oscar Bicycle, plus orchestrated pop gems from the soulful Truly Smith, psychedelic The Alan Bown!, Swedish mods The Tages and dramatic singing twins Paul & Barry Ryan.