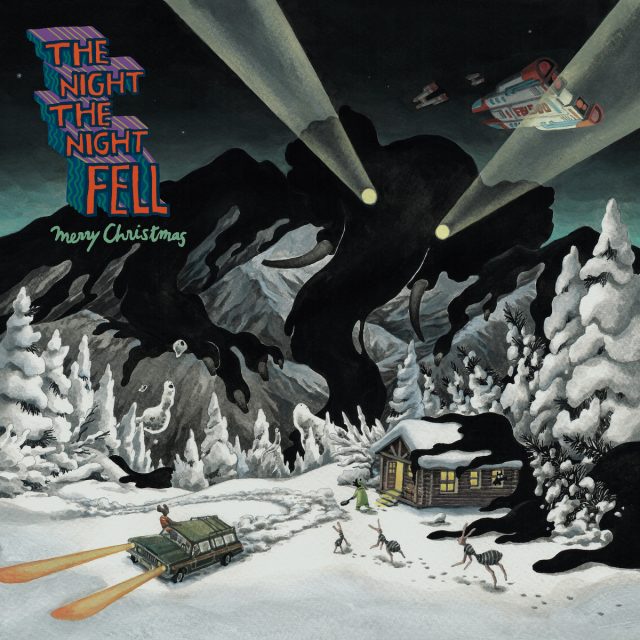 Nope, it’s not the first holiday album of the year. Not by a long shot.

In case you were wondering or confused, Merry Christmas is not the album title. It’s the name of the band — and they’re every bit as unique as that handle. Based in Tokyo and featuring a co-ed lineup of British and Japanese players, the veteran quintet fashions a fascinating, free-flowing synthesis of sounds and styles that deftly and daringly mixes, mingles and melds indie-pop, math-rock, psychedelia, freak-folk, prog and more — often over the course of a single shape-shifting song. On top of that, the dozen-song disc is apparently a full-length concept album set inside the mind of a female coma patient. Jingle Bells it ain’t — but don’t be surprised if this intriguingly inspired hybrid leaves you scratching your head and wondering: Do you hear what I hear?

THE PRESS RELEASE: “The Night The Night Fell is a boundary-smashing adventure in indie math pop. The Night The Night Fell is the much-anticipated debut album by the U.K./Japan quintet Merry Christmas. From the discordant chants of the twisting opener Superghost to the fuzz- folk redemption inspiring closer Tivoli, the album draws the listener into the unconscious journey of a girl who has tragically fallen into a coma. The lyrical and sonic atmosphere progresses throughout the 42-minute adventure over 12 tracks — from absolute despair to defiant celebration as her story, realizations and dreams unfold. The album was recorded and mixed in Tokyo by Paul Anthony Medrano and mastered by Grammy-winning mastering engineer Alan Douches at West West Side Music in New York. Merry Christmas are a 10-legged festive wonder tank from Tokyo, Japan. They blend elements of fuzz folk, math rock and pop into melodic hooks which are contagiously catchy but impossible to assign to a single existing genre. Ben George (Cats and Cats and Cats), Matthew Thoren (Placebo Sound), and Joe-Joe Moran-Douglas (At Risk) were brought together in 2012 through a mutual love of Neutral Milk Hotel, and after recruiting Yuki Nishimura and Yurie “Barihi” Yamaguchi (Lazs) the band quickly developed an underground following in Tokyo. Their first EP, The Flying Trombone Sisters (2014), solidified their fuzz-folk sound and strengthened their fanbase. The following releases Rattattattattat (2016) and Dark Forest Be Gone (2018) saw Merry Christmas expanding into new territory.”