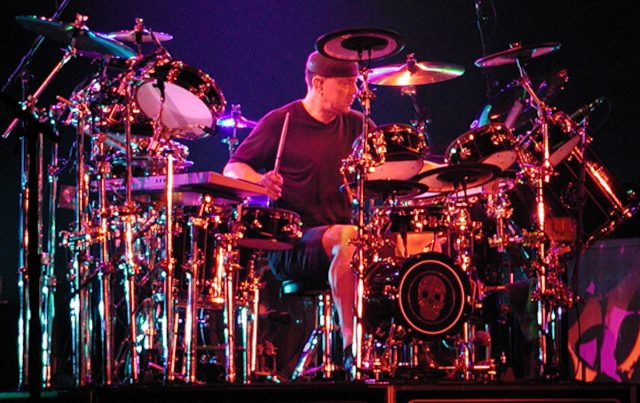 Like every other Canadian rock fan — and every other drummer who spent decades in a futile quest to play half as well as he did — I was shocked and stunned to learn that Rush drummer Neil Peart has died after being diagnosed with brain cancer. I was lucky enough to see Rush many times over the decades, starting with their 2112 Tour back in the ’70s, when they were still playing small theatres with Max Webster as their opening act. I was also lucky enough speak to the reclusive drummer back in 2010. Here’s what he had to say:

If you want to know Neil Peart’s feelings about fame, just read the words to Limelight: “Living on a lighted stage approaches the unreal,” the Rush drummer and lyricist wrote in 1981. “One must put up barriers to keep oneself intact.” Decades later, Peart hasn’t changed his tune — he’s still uncomfortable inside stardom’s gilded cage.

“All that fuss,” the former St. Catharines boy sighs from his home in Santa Monica, Calif., where he lives most of the year with his second wife and their baby daughter. “I’m shy about all that fuss.”

One thing Peart clearly doesn’t shy away from: Work. Over the years — in addition to his main gig with singer-bassist Geddy Lee and guitarist Alex Lifeson — the celebrated and innovative percussionist has written four non-fiction books about his life, career and travels; released two full-length instructional drum videos; done cartoon voiceovers and film cameos; organized tribute albums and concerts to iconic drummer Buddy Rich; and regularly blogs, reviews books and even shares recipes on his website. Most recently, he recorded a drum-based version of the iconic Hockey Theme for TSN and shot a video to go with it, playing a custom-made kit bearing the insignias of all 30 NHL teams (see sidebar below).

To publicize the project, the intensely private Peart — who retreated more or less permanently from the media after the tragic deaths of his daughter and first wife in the late ’90s — emerged from hiding to talk with me. And while he still shies away from personal questions, the personable ex-pat was happy to chat about everything from the future of Rush and the integrity of the album to parenthood and pop music. Some excerpts:

What’s happening with Rush? I read on your blog that you were going to meet in November to discuss your future. What happened?
Well, in fact, we’ve just started working on new material. So we plan to get some writing and recording done. And we’re considering doing everything this year — maybe even a bit of touring. We are in action. And we feel a bit liberated by the state of the music business. Even since 2006, when we started Snakes and Arrows, the album has become less significant in these times of iTunes and shuffle settings and whatnot. But perhaps we can take advantage of that and work in a whole different way. So we decided, when we did meet, that we’re not constrained by the patterns of the past, where you spend a year writing and recording, and the next year touring. Anything’s possible now; we can record a couple of songs and put them out and then go on tour if we want. So at this point, we’re just embarking on writing, but keeping ourselves open to all those other possibilities. One of our early titles for this year was Research and Development. That’s where we’re at.

So you might start making music in smaller increments?
Or larger. I went to see a band called Porcupine Tree not long ago. And I was talking with (singer-guitarist) Steven Wilson. They just put out a 55-minute piece. That’s a finger to the whole iTunes shuffle thing, and he intended it as such. And I thought, ‘Yeah, that’s another way of rebelling against it — by just saying no.’ There’s too much lost in giving up the integrity of an album — what it represents to you as a musician, and as a human being, for that matter. So I like that approach. That’s very possible for a band like us. So there are no limitations; we might go big or we might go small.

Tell me about the new material — are there songs, or is it just ideas at this point?
Oh, we just literally started. There’s nothing to tell, really, except that we’re doing it.

You don’t strike me as a band where someone comes in with an entire song. I imagine there’s a lot of back and forth.
Remarkably so, yeah. We’re so unique in that regard — all three of us are equally involved. I tend just to give them a whole bunch of lyrics. I don’t walk in and say, ‘Here’s the song I just wrote, what do you think?’ I give them choices, and genuine opportunities to respond. Geddy and Alex are getting together now on the musical side, so I just sent them a whole bunch of lyrical ideas. Anything they respond to, I’ll get inspired by. That’s what I’ve found in the past; if Geddy says, ‘I like these four lines,’ that to me is great. It’s not a rejection of the rest of it; it’s that those four lines happened to reach him. So I’ll build on that.

Would you ever consider downsizing your tour — playing smaller venues with less gear and without the video screens?
We wouldn’t want to. People say, ‘Wouldn’t you like to play a little club?’ Nooo! We’ve played plenty of clubs with $20 worth of equipment and a cracked cymbal and all that. When you can do it better, why wouldn’t you want to? The rear-screen projections are, I think, a beautiful part of the show, and they leave us free to concentrate on the musicianship. And we always loved that kind of production, growing up with bands that did it. So it’s to us natural and desirable to deliver that kind of show because we can. To me, less is not more. More is more. And more is better.

What else have you got going on? You often seem to have pots on different burners.
Well, if there’s one thing I’ve learned over the years, it’s to have just one. That’s why I love the recent progress of events. We toured all through 2008, and then I did the Buddy Rich project, which was only one night, but just as the Hockey Theme is only one minute of work, it’s two months of preparation. I love preparation. I love rehearsing. Geddy always jokes that I’m the only person he knows who rehearses to rehearse. But before the band rehearses, I rehearse for a couple of weeks, so I’m ready and I’ve got the tempos locked. And right now the band is the project.

And you’ve got a new daughter to take up your time. Congratulations.
Yeah, there’s always lots going on around my house.

Are you going to put her on the drum kit?
Whatever she wants (laughs).

How does being a father again change your priorities vis-a-vis work?
I think the person you are is the parent you are, ideally. And one of my rules for parenthood is setting a good example. That means having a rich, fulfilling life. So time will tell, but I think my energy, ambition, obsessions, fixations, whatever — those things don’t change. Whatever happens, I’m still going to be in love with words and with music and want to express them.

What are you going to do when she wants to listen to whatever the equivalent of Miley Cyrus is 15 years from now?
I hope I’ll like it. Genuine, honest pop music, I’ve never had a problem with that. I respond to anything that’s well done and doesn’t pretend to be something other than what it is. I just hate the liars. The thing that offends me is when they’re talking down to me, singing down to me. That happens in rock just as much as pop. When you have bands bragging about their intelligence and then singing about sex and drugs and rock ’n’ roll, then you know you’re being condescended to.

Neil Peart is far more skilled with drumsticks than hockey sticks. But when the Rush drummer was asked to record a new percussion-based version of The Hockey Theme for TSN, he came to play — and gave 110%. Of course, what else would you expect from a St. Catharines boy who grew up loving the best game you can name? Even if he wasn’t much of a player.

“I was a twiggy little thing,” recalls Peart. “I put on skates and my ankles would just fold over, you know. “At the same time, growing up in the 50s and 60s in St. Catharines, Ont., my dad took me to the St. Catharines Blackhawks games on Sunday night, and we had a backyard rink in our yard, and we played street hockey. And I just recently remembered the old table-top hockey games we had. And hockey cards! Putting hockey cards in the spokes of our bicycles. Hockey just imbued your life, no matter what. Even though, no, I couldn’t play properly and didn’t make a team.”

Not until he became a rock star, anyway. “When we were on tour around 1980 or so with the Max Webster guys, we would go play hockey after the show. We carried hockey gear and pads and everything with us, and we’d rent a little arena from midnight to 2 a.m. and go and play hockey. And I love the fact that we work in the same buildings as the NHL does. I laugh that we have the same office; just on different days.

“And Geddy and Alex grew up with Steve Shutt of the Montreal Canadiens, so during his years playing with them, there were a lot of times we’d meet up on the road in Atlanta or St. Louis and go to their game on a day off, or they’d come to our show. The number of cities I’ve been to hockey games in, never mind just playing in the buildings, has been a huge part of adult life.”

These days, even though he spends more time in sunny Santa Monica than snowy St. Catharines, he’s still a fan. “I still keep a home in Quebec, and I love to be there in the wintertime, sit down on a snowy evening and just watch a hockey game and take in all that Canadian-ness. Even the commercials; the whole thing to me is an IV of Canadian-ness that I really relish and that helps keep that whole continuity of life alive for me.”