For Juliana Hatfield, the past is a nice place to visit — but she wouldn’t want to live there.

“I really don’t think about the past too much,” insists the singer-songwriter from her Boston home. “I really prefer to be totally focused on the present.” 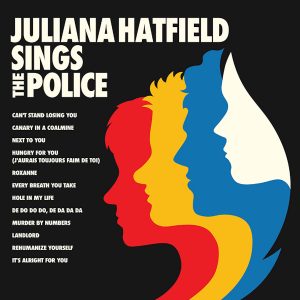 Of course, sometimes those two worlds can’t help but collide. Case in point: The veteran indie-rocker’s imminent new covers album Juliana Hatfield Sings The Police. Out Friday Nov. 15, her 18th solo studio set is also the second instalment in a tribute-disc series that began with 2018’s enthusiastically received Juliana Hatfield Sings Olivia Newton-John. In keeping with that release’s MO, the Police collection finds Hatfield putting her own stylistic spin and sonic stamp on the proceedings. She deconstructs and simplifies the arrangements. She shifts tempos and time signatures. She alters the mood and vibe. She skips some classic hits in favour of deep cuts. She even banishes reggae in favour of edgy pop-rock and punk. The overall effect is impressive on both a technical and creative level, making you hear the songs of Sting, Stewart Copeland and Andy Summers in a whole new way — while making it clear that Hatfield isn’t fooling around.

She’d be the first to agree. “Right now I’m definitely in work mode and creative mode,” explains the 52-year-old Hatfield, who also wrote, recorded and released the introspective original album Weird between the two tribute discs. “I’m trying to make two albums a year like that, at least for a few more years. I want to just keep slamming away and pounding at it until I drop. After that, I’ll look back at it from my hospital bed or whatever. But right now, I want to make the most of my time while I’m still healthy. I don’t want to sit back and waste time as time starts to go faster and faster. I want to work faster and faster.”

Thankfully, she slowed down enough to talk to me about embracing the darkness, raging forward, why Phil Collins’ loss is our gain — and which superstar she wants to cover her songs. Enjoy.

When you made the Olivia Newton-John album, did you intend it to be the start of an ongoing project, or was it just supposed to be a one-off?
I never plan very far ahead, so I was just thinking of it as that one project.

What changed your mind?
It was just really fulfilling for me. It was a lot of work, but it was also really exciting to go to these places that I don’t instinctively go when I’m making my own music. It stretched me in a way. And it got me out of my own habits. I’ve been doing this for so long that I have certain things I do over and over again in my playing style and writing habits. I feel like I get in these ruts with my own music. But with these songs, there was some pretty sophisticated songwriting on some of them, and the melodies were really challenging. So recording them brought me out of my own repetitive self and made me think of other ways to do things. Also, if I’m honest, I have to say that I was very pleased by the reaction it got. A lot of people seemed really happy with the project, so that was a good feeling.

Some artists might not be so pleased about a covers album getting that much praise and attention.
I don’t feel that way. I can understand how someone in my position might be just generally bitter (laughs), but I’m honestly not. I’m purely glad that the Olivia Newton-John record gave pleasure to people. I’ve been doing this long enough that I understand what I am. I understand my position. I understand that I am what I am.

OK, so what are you?
Well, I don’t know what I am. (Laughs) But I know that I am that. I mean, I hate categories and labels, but I guess if you had to label me, it would be a cult artist, which is really just someone who has credibility and makes good work still, but has a smallish audience. But I understand that there are people who heard my Olivia Newton-John record and had no idea that I had been making records since the one that came out in 1993. I’m totally fine with that. I don’t mind.

You don’t seem to have much of an ego.
I have no ego and no competitive instinct or anything like that.

How did you pick The Police for this latest set?
Well, like I said, I really don’t put a lot of thought into things. I’m not a conceptual thinker. An idea will come into my head, and it’ll be like a switch going on. So, after I did the Olivia Newton-John stuff — and after I did an album of all-original songs; I certainly haven’t abandoned that — I was fixated on doing an album of Phil Collins songs. That was my plan. I was starting to listen to his stuff and his Genesis stuff. I was choosing songs, learning songs. But as I was going that, I was starting to feel doubt. I was starting to feel the songs were a little bit … well, some of them didn’t have enough thematic depth, and some were a little simplistic in what they were saying. There was a lot of nice darkness in some of the songs, and I need some darkness. I can’t sing all happy songs. But as I was listening to Phil Collins, I heard this song that Sting sings on, Long Long Way To Go. That led me to think about The Police and how much I loved them and how important they were to me when I was young, as opposed to Phil Collins, who wasn’t really a big deal in my life. So I just switched my brain over from Phil Collins to The Police and it just made so much more sense, because I have much more of a long-term emotional connection to The Police.

Did that make the job easier or was it the same amount of work?
I knew the songs better. I had already listened to them over and over again, and I sang in a cover band in high school that did a lot of Police songs. But there was still all the work that had to be done: Learning the chords, learning how to play them. Because some of the things Andy Summers does are different than what I would do. We have very different styles. Some of the chords he plays, he uses interesting voicings. And I don’t like reading guitar music — it gives me a headache. So I was basically just trying to figure it out on my own by listening to the songs watching videos of him to figure out where his hands were. It was that kind of stuff.

But it’s not like you’re just Xeroxing these songs. Many of them are very different from the originals — Roxanne, Hole in My Life and Next to You seem to have that darkness you mentioned earlier. It seems you were letting the lyrics set the mood.
I wasn’t consciously thinking of that. It was more intuitive. I was just trying to get to the essence of what the song is saying to me. And something like Hole in My Life, I can really relate to. Because I still feel it. My bass player suggested we change the time signature from four to three, and that was a brilliant idea. But he was thinking we could do it like a soulful ballad, but I knew I wanted to hit it harder. I wanted to pound on it, because that would express the feeling of the song to me.

You say you don’t put a lot of thought into things, but it sure sounds like you did.
They’re not really conscious considerations — more like just an instinct to do something. Like with Murder by Numbers, it just felt so obvious to do it fast and punky. The Police do it kind of jazzy, and it makes the words ironic or something. But I just wanted to be literal about it and hammer it out, because there’s some violent imagery there.

Some people are bound to be surprised that there’s no reggae anywhere on the album.
That’s because I can’t do reggae (laughs). I actually said that when I was recording — ‘We’re not doing any reggae’ — because it would be so inauthentic. Not that it wasn’t authentic for The Police. But they clearly listened to more reggae than I ever have. I’m not really very well versed in the history or the sound of reggae. I like it, but I don’t know anything about it really.

Between Phil Collins and The Police you also seem drawn to great drummers.
I know. With Phil Collins, that was something I was worried about: What am I going to do about all the great drumming? It’s hard. And with The Police, every player has a unique and original sound and style. It’s a little intimidating. You just have to put that out of your head and not try to do any of that. You don’t even try to get close. Because it you try, you’ll just fail. It becomes a poor imitation, and there’s no point in doing that. I’m not a cover band. I’m making covers, but I’m not trying to give a good time to people in a bar all night long. Not that there’s anything wrong with that.

Who would you like to cover your songs?
I don’t know. Who could make me the most money? Taylor Swift, maybe? (Laughs) No, that’s a horrible, cynical answer. Really, I’m happy anytime anyone covers anything. People cover my music sometimes and send it to me and it’s always really flattering.

Are you already writing your next album?
I’m actually trying to write some other stuff first. I’m taking a few months to write a long-form prose thing. But I’m starting to get ideas bubbling up, and I’m writing down some lyrical ideas. So I have a feeling I’m going to start writing pretty soon.

Do you think it will be another introspective album like Weird?
No. I think it’s going to be like Rage Against the Machine, but my style. It’s going to be a protest record. But I want to do something that’s really really simple, with repetitive choruses and not a lot of words so it’s deceptively easy to sing along with — but very definitely protest music.

And are you giving any thought to the next covers album?
Yes. I’ve done an Australian and I’ve done a British band. So I think I need to do an American band. And I have an idea. But I don’t want to talk about it yet.