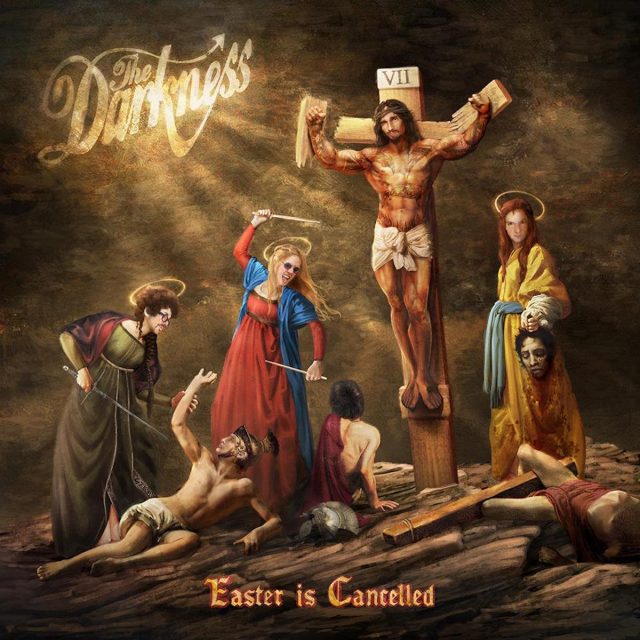 WHO ARE THEY? The ridiculous British retro-rock ensemble led by tight-trousered screamer-guitarist Justin Hawkins, a man who makes Freddie Mercury seem like Barry White.

WHAT IS THIS? Their sixth studio album and fourth release since reuniting in 2011 after a five-year break sparked by Hawkins’ rehab battles with booze and drugs.

WHAT DOES IT SOUND LIKE? More or less like every album they’ve ever made — which is to say, another batch of glammy, hammy, ’70s-style guitar-rock fashioned from arena-sized riffs, driving boogie beats, rafter-rattling falsetto vocals and an endless parade of cheeky, winking lyrics about sex, death, religion and rock ’n’ roll.

WHAT WOULD BE A BETTER TITLE FOR THIS ALBUM? Six Of One, Half A Dozen of The Other. Or perhaps Too Old To Rock ’N’ Roll, Too Creatively Bankrupt To Quit.

HOW SHOULD I LISTEN TO IT? While reminding yourself that despite all evidence to the contrary, Hawkins and co. maintain that they are not a joke band and this is not a parody of cheeseball metal — it’s sincere cheeseball metal!

WHAT ARE THE BEST SONGS? Rock and Roll Deserves to Die, Live ’Til I Die and Heavy Metal Lover rock almost hard enough to overcome the silliness of their lyrics — but nothing here rises to the gleefully absurd brilliance of early hits like I Believe In A Thing Called Love and Get Your Hands Off My Woman. Because all jokes are only funny the first time you hear them.

WHAT WILL MY FRIENDS AND FAMILY SAY? ‘How long are they going to keep this up?’

HOW OFTEN WILL I LISTEN TO THIS? I can’t even imagine members of Hawkins’ family would listen to this more than once.

IF THIS ALBUM WERE A TV SHOW, WHAT KIND OF TV SHOW WOULD IT BE? One of those over-the-top ’70s British workplace sitcoms that dragged on for years beyond their best-before date.

SHOULD I BUY, STREAM OR STEAL IT? Stream it if you must — stealing it suggests it might have some value.