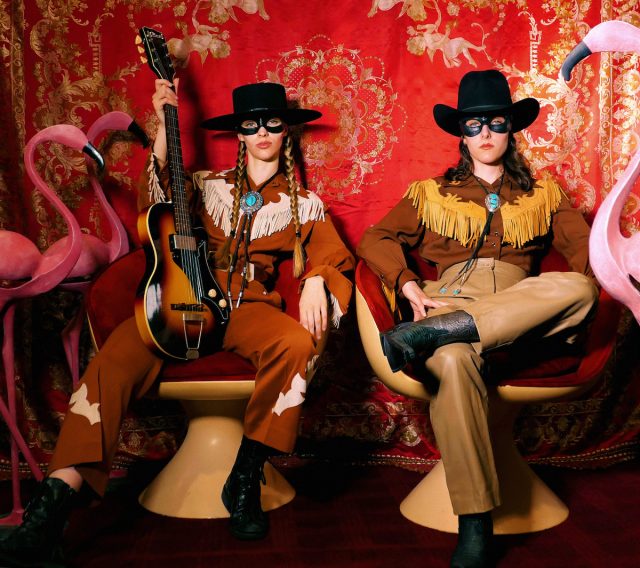 They are mavericks. Renegades. Outlaws. Enigmatic loners with no names, no pasts, no places they call home. They play by their own rules, take orders from no one, respect tradition and have little to say beyond the unvarnished truth. And damned if they don’t know how to rock a black mask and a western hat.

They could be the heroes — if not the villains — of every great western story every told, written or filmed. But they’re not. They’re Bad Flamingo. They’re one of the most intriguing and original musical duos to come down the trail in a hot minute. And one of the most together, fully realized young acts I’ve come across in the decades I’ve been writing about music.

They are also one of the most secretive. Their bare-bones website refers to them only as The One On The Left and The One On The Right. It does not reveal where they live, how they met, what their name means or how long they’ve been together. They are not photographed without their masks, hats and western garb. The most tantalizing tidbit you’ll find there is an Oscar Wilde quote: “Give a man a mask and he will tell you the truth.” In our age of relentless hype, social media influencers and narcissistic oversharing, their refusal to play the game is not only refreshing: It’s to be admired. 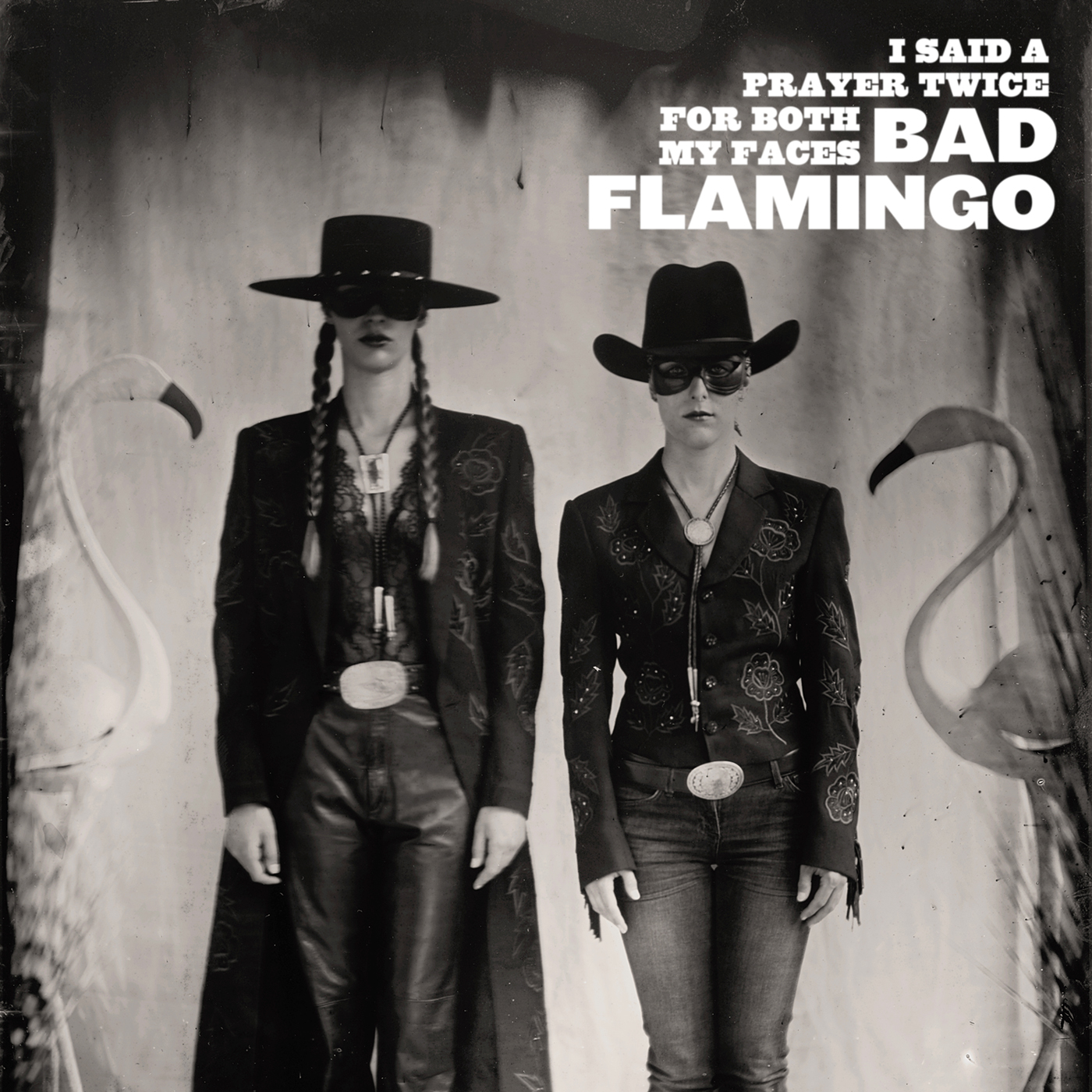 Unsurprisingly, their brand of alt-country proves to be just as enigmatic. Their catalogue consists of one album — 2018’s I Said a Prayer Twice for Both My Faces — a few singles and some simple, home-made videos. All of them sound as starkly beautiful and hauntingly lonely as the desert. Dark banjo melodies and beatbox grooves drip and flow like molasses. Spaghetti-western guitars twang. Whistled Morricone refrains float past hauntingly. Hazy tones and textures shimmer and swirl like heat waves coming off the road. Dusty vocals whisper in your ear, spinning tales of drifters, whiskey lies, howling at the moon and running from the lawman. It’s no wonder their music has appeared in Kevin Costner’s contemporary western series Yellowstone.

Want to hear more? Don’t hold your breath. And don’t bother checking the concert listings or music blogs. The duo have only performed live twice in their career. If footage and photos of those shows exist, they’re hard to find. And they’ve never, ever done an interview. Until now. After I showcased their latest video for the song Fire a while back, they got in touch. I asked for a chat, expecting refusal. They pleasantly surprised the hell out of me by accepting.

So, from their current hideout in Tennessee — “Let’s just leave it at that,” they said politely but curtly when I tried to pinpoint their location — here is the world’s first interview with Bad Flamingo. It answers some questions. It sidesteps others. It may even raise a few new ones. Such is life. But at least it gives you a peek behind their masks. And maybe, just maybe, gets you a little closer to the unvarnished truth. (Note: Because their voices sounded so similar over the phone, I gave up trying to figure out which was Left and which was Right. And ultimately, they both agreed all the time, so it didn’t matter. Just remember what does matter: You read it here first.)

What’s the origin story of the band? How did you get together?
Well, we’ve known each other as long as I can remember. And we’ve always played music and loved music. One day, we came up with the idea of having a band where there are no rules and we can do whatever we want, record however we want, and be free to do anything. And we may have been watching The Good, The Bad and The Ugly.

That explains the Bad part of the band name. What about the rest?
I was looking around my apartment. I have hundreds of flamingos that I’ve collected over the years. My screen saver is a flamingo. My notebook has a flamingo on it. So it was as simple as that.

Whose musical trail are you following?
We listen to a wide range of music. We listen to the Everly Brothers. We love The Animals. We love Dwight Yoakam. We love Tony Joe White. We love Hank Williams. And well, everybody loves Elvis.

So, not a lot of contemporary stuff.
We do listen to some rock. And we listen to stuff like En Vogue too, you know. We prefer the old-school stuff, though.

Why are you a duo? Are you antisocial? Control freaks?
Some of both. (Laughs) We’re both individually loners, and together we’re learners, so it makes sense to do it that way. We like to keep it compact. We like it to be just the two of us.

Why do you wear masks?
We wanted to be free to do whatever we want, to be anonymous and for it all to be about the music. That’s why we did the masks. How they came about is a little more questionable. We really have no idea. We had an idea for the band and we knew we wanted to be outlaws. We drew sketches. In my notebook, I have sketch after sketch of the hats and the masks. We actually bought the hats and the masks — and they were exactly like we sketched them.

That Oscar Wilde quote that you use as your motto: How does it apply to your music?
You know, everyone censors themselves. But we don’t censor ourselves at all with the lyrics in this band. We say what we want to say.

Why all the secrecy?
It’s just the way we are naturally. In a lot of the ways, the mask is most like we are. This is who we are. We’re private people. We’re very opinionated. And this gives us the freedom to do and say whatever we want. Musically, too. We’re recording to cassette. We have amps that look like they’ve been through so many floods that they can only record a chorus and then they’re done. We have made a conscious effort to use vintage gear and weird instruments like autoharp. They’re hillbilly instruments and we love ’em.

How do you write songs? Together or separately?
We sit in a room together and we write. We do all-nighters on the couch until we have it. Sometimes one of us brings in something and the other adds to it, but usually it starts together.

How smooth is that process? Do you argue a lot?
Well, I have called her something other than The One On The Right. (Laughs) Yeah, we’ll shoot each other down if something goes crazy. Every time we write a song, I ask her, ‘Is writing this hard?’ And every time, she says, ‘Yeah.’ But generally, we lean the same way. We like the same things. And any whim we have, we follow it and see what happens. And we write a lot. We’ve already written 50 songs. We’re almost finished with our next album, and we have seven songs for the one after that. We’ve been making so much and so fast that we forget them. We wrote one two months ago that we didn’t remember until we pulled it up again. It’s kinda nice. It’s fresh again. We like it now.

How will the next album be different from the first one?
We’re edging more electric on this record. And this one’s really about the groove. It just worked out that way. And I feel like we’re writing lyrics completely differently. I really like where we’re at now. Though I’m sure where we’ll be in a year will be completely different, and we’ll be, ‘Oh we’re way better than we were a year ago.’ We just keep moving forward.

How did your music end up in Yellowstone?
We met Taylor Sheridan, the writer/director, at a movie theatre. We knew him because we love Hell or High Water. It’s one of our favourite films. So we ran up to him and gave him a CD. He told his limo driver to put the CD in and he texted us about five minutes after we handed him the CD. Then a week later — and this is when we only had, like, seven songs — he said, ‘Come and play for the cast and crew.’ We did that twice. Those have been our only shows so far.

Would you like to be in a western?
Well, Johnny Cash was in a western. I’m game. We do like horses. And we do love westerns — outlaw films in particular. We’re big Clint Eastwood fans. We love Butch Cassidy & the Sundance Kid.

So, you see yourselves as villains?
Well, one of us is leaning towards heroes, and the other one kind of roots for the villain, I’d say. It’s a bit of a power struggle.

What about touring?
Oh, it’s happening. There’s a master plan. We’re recording right now and we’re shooting some videos, but after that, we’re going to do the live thing. We play nice with each other. Sometimes. 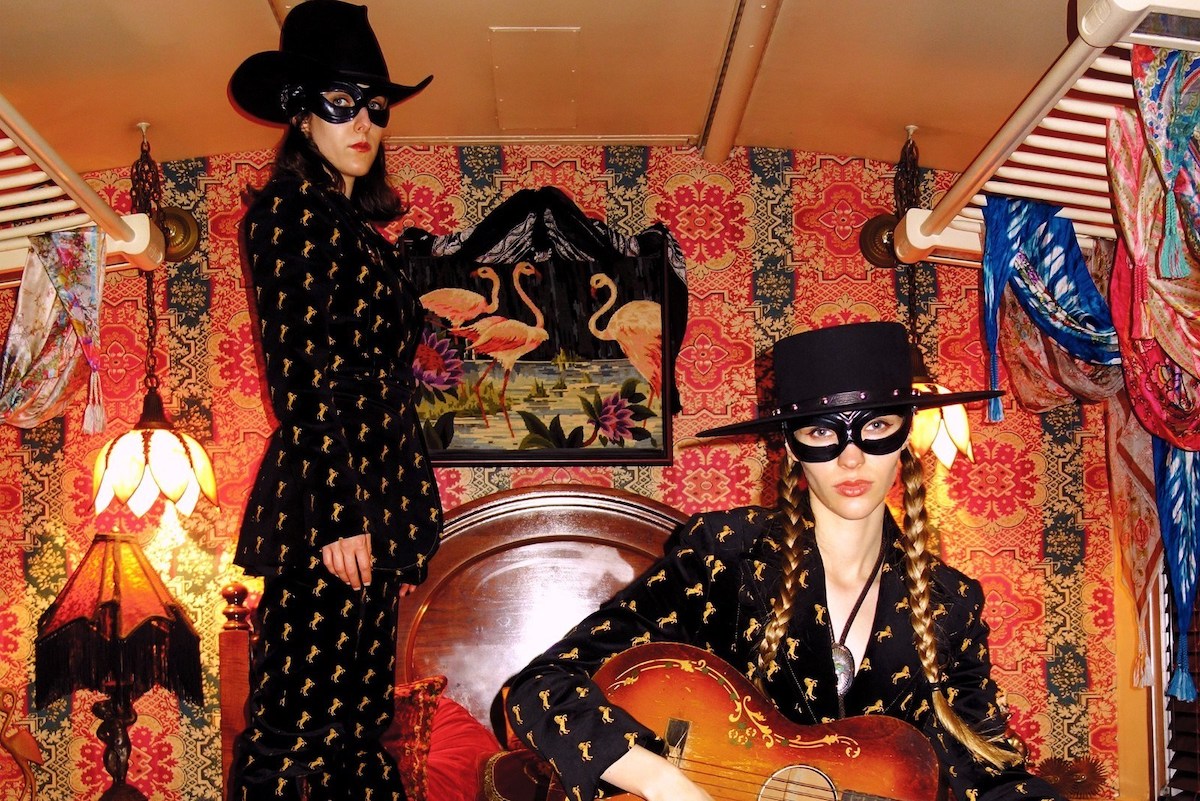