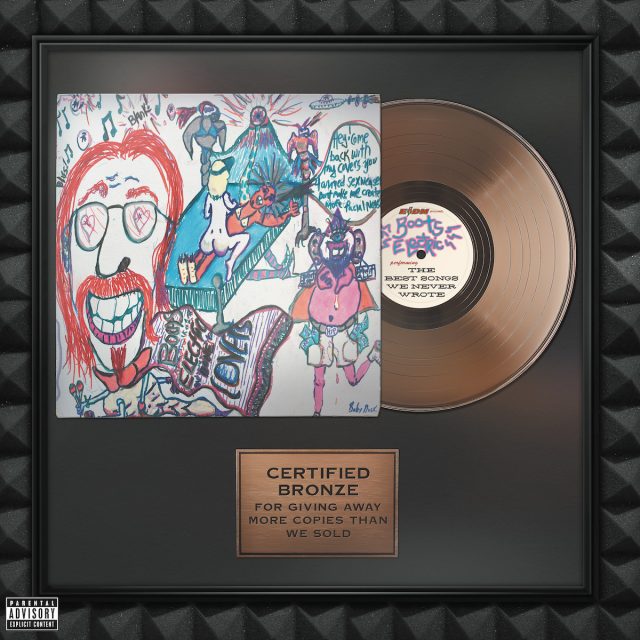 WHO IS HE? Singer-guitarist Jesse Hughes a.k.a. Boots Electric, the handlebar-moustached, aviator-shaded frontdude of retro-rock revivalists Eagles of Death Metal.

WHAT IS THIS? An irreverent collection of 13 classic-rock covers that Hughes recorded to help him deal with depression after the band’s 2015 concert in Paris was targeted by terrorists.

WHAT DOES IT SOUND LIKE? The sonic personification of Hughes’ yin/yang persona: Boots kicks up his heels and puts his glammy, party-down spin on chestnuts from likely suspects such as KISS (God of Thunder), AC/DC (High Voltage / It’s a Long Way to the Top If you Wanna Rock ‘N’ Roll), The Ramones (Beat on The Brat), Steve Miller (Abracadabra) — and left-fielders like George Michael (Careless Whisper), Mary J. Blige (Family Affair), Cat Stevens (Trouble) and Mickey Newbury (Just Dropped In To See What Condition My Condition Was In).

WHAT WOULD BE A BETTER TITLE FOR THIS ALBUM? Almost anything, really. That sucker is a mouthful.

HOW SHOULD I LISTEN TO IT? With the same affectionately silly spirit that was used to create this love letter to the healing powers of good ole rock ’n’ roll.

WHAT ARE THE BEST SONGS? His thumping revamp of Careless Whisper sounds like George Michael crossed with Spencer Davis Group’s I’m a Man — on steroids. The Jesus Christ Superstar-style ’60s go-go rock of Just Dropped In is a stone gas. And if you can listen to him sing Family Affair lyrics like, “You know we gots to get it crunk” without smiling, you’ve got me beat. But really, the whole album is a kick — even though cuts like Trouble and Love and Rockets’ So Alive also have darker lyrical undercurrents.

WHAT WILL MY FRIENDS AND FAMILY SAY? ‘That’s weird. But cool weird.’

HOW OFTEN WILL I LISTEN TO THIS? If you dig good covers, this one could be in heavy rotation for the next little while.

IF THIS ALBUM WERE A BOOK, WHAT KIND OF BOOK WOULD IT BE? A self-help book pieced together from the pages of old issues of Creem, Circus and Hit Parader magazines.

SHOULD I BUY, STREAM OR STEAL? Get out your damn chain wallet.