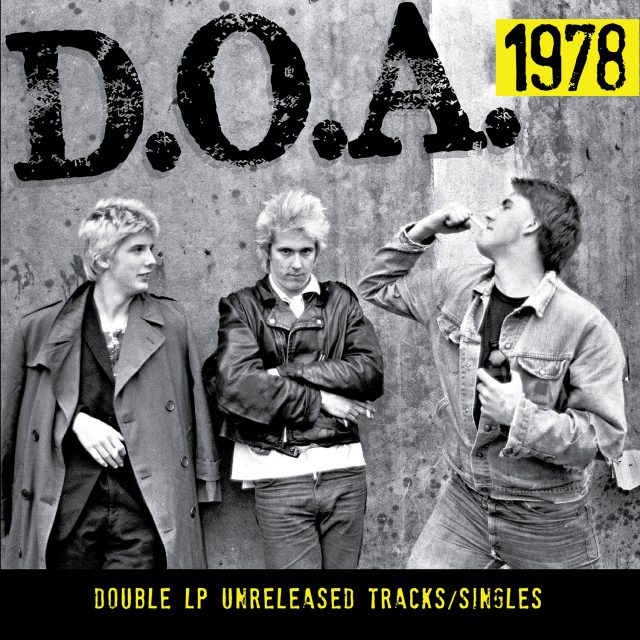 Joe Keithley is no shithead. The D.O.A. frontman, punk pioneer and Canadian music icon knows the title of his band’s new rarities compilation 1978 is incomplete at best and slightly misleading at worst — the 21 demos, early singles, unreleased tracks and other odds ’n’ sods on this set actually date from 1978 to 1982. But DOA 1978-1982 sounds too much like an obituary — especially for an album that co-stars late bassist Randy Rampage and guitarist David Gregg. So you can’t blame Joe too much for fudging the numbers in the name. But make no mistake: He’s not monkeying around when it comes to the numbers in the set list. Although it includes a handful of familiar cuts like Disco Sucks, Fucked Up Ronnie, The Prisoner and World War 3, it’s heavily dominated by previously unreleased punk salvos like like Bored and Suicidal, Rent-a-Riot, No Way Out, No God, No War and the rollicking Rip Dis Joint, featuring lead vocals by virtuoso drummer Chuck Biscuits. Toss in demos of classics like Liar For Hire and The Enemy (with different lyrics and a vocal that’s more Strummer than Shithead) and you’ve got an essential addition to any self-respecting punk’s collection. Now, which morally bankrupt and criminally corrupt federal politician do we have to bribe to get Keithley a freaking Order of Canada?