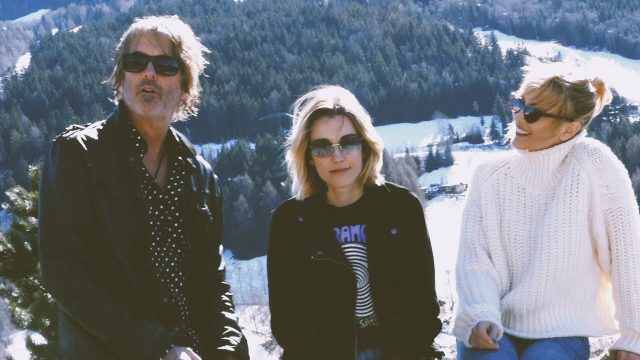 Still Eighteen embrace The Sun in a sky of grey in the heartwarming video for their latest single — premiering exclusively on Tinnitist.

The family band’s newest track “is about the person who is always there for you and has your back,” the group says in a press release. “Still Eighteen has had their share of trials, but they’re always there to pick each other up when they’re feeling down. This inspired the band to write a song that pays homage to those who help to brighten up someone’s darkest day.”

Believe it or not, the song was inspired by the discovery of a plastic swan on the beach one rainy Sunday afternoon in 2016. Former Platinum Blonde and Trixie Goes Hollywood singer-guitarist Joey Ciotti and his daughter Samantha — who plays bass in the power trio rounded out by Joey’s wife Karen on drums — were walking their dogs when they noticed the small, dirty plastic swan in the sand. He picked it up, feeling it was a sign. After learning via Google that swans are associated with love, music, and poetry — and that in Roman mythology the swan was sacred to Venus, the goddess of love — Joey picked up his guitar and started writing.

It took over two years to finalize The Sun — the most intense, prolonged endeavour Still Eighteen has undertaken to date. The song went through many transitions as it evolved from a guitar-based song to a piano-driven electro-rock ballad delivered in Joey’s “David Bowie voice,” as Samantha and Karen like to call it!

The video was filmed during Still Eighteen’s trip to Europe this winter, when they performed in Belgium, France, Switzerland & Italy. Since The Sun is about someone who is always there for you, the band wanted the video to showcase that bond.

“Having the opportunity to be in Still Eighteen and pursue this dream together is one of the greatest gifts,” the band says. “It has given great meaning and fulfillment to our lives. We are truly best friends. Don’t get us wrong, we certainly have our arguments and tougher moments but through it all, we are there for each other. The video is our real-life family footage of our adventure of being in Europe together. The good, the bad and the crazy, ha, ha! We hope the song and video inspire people to nurture those special relationships and be there for one another.”