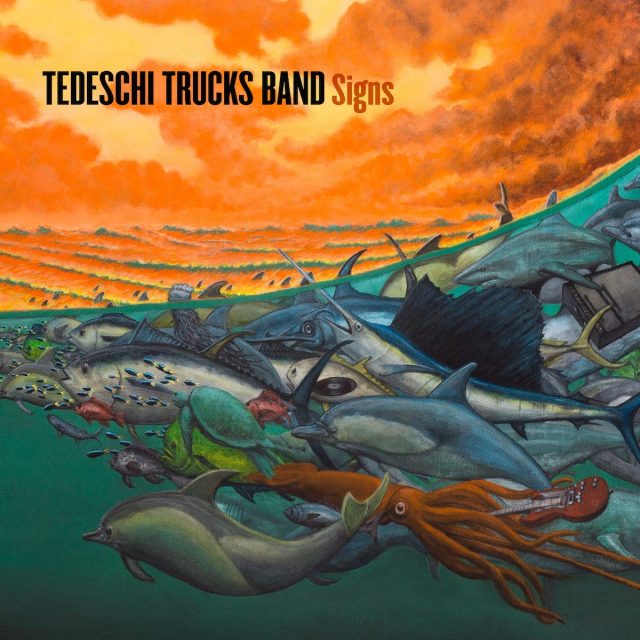 “I don’t always love music that tries to be this brand-new discovery every time,” Derek Trucks told me in 2016. “A lot of my favourite music is from bands that just stay on it and get better and age well … I feel like you just keep going and try to evolve a little bit all the time.” That philosophy was the driving force behind 2016’s Let Me Get By, the third album from the 12-piece soul ’n’ blues revue Trucks co-founded in 2010 with wife Susan Tedeschi. And it’s still their M.O. on their fourth full-length Signs. Not that there’s a damn thing wrong with that. In fact, it’s allowed them to make what might be their richest and most rewarding album to date. Recorded once again in Swamp Raga, the backyard studio of their Florida home, the 11-track set stays well within their familiar comfort zone. The band cooks up a gumbo of soul, blues, funk and jam-rock. Tedeschi breaks out vocals reminiscent of Janis Joplin via Bonnie Raitt. And slide-guitar virtuoso Trucks cuts loose with solos that balance his unmistakable chops with his undeniable artistry and impeccable taste. But in keeping with Trucks’ manifesto, change and growth are clearly on display here. Chief among them: A few more ballads in the mix, giving the disc a somewhat sombre and reflective tone apparently inspired by the recent deaths of friends, family and formative influences like Gregg Allman, Leon Russell and Butch Trucks, Derek’s uncle and former Allman Brothers Band-mate. But this is by no means a mournful album. Titles like I’m Gonna Be There, Walk Through This Life, Strengthen What Remains and Still Your Mind are ultimately buoyed and driven by hope, commitment, optimism and an unquenchable life force. Not to mention the simple joy at the heart of cuts like the wah-wah workout Hard Case, the shape-shifting blues of Shame and the Stonesy stomper They Don’t Shine. If they were aging any more gracefully, they’d be getting carded at their gigs. Ignore their Signs at your own risk.