Home Read Dennis Quaid & The Sharks | Out Of The Box 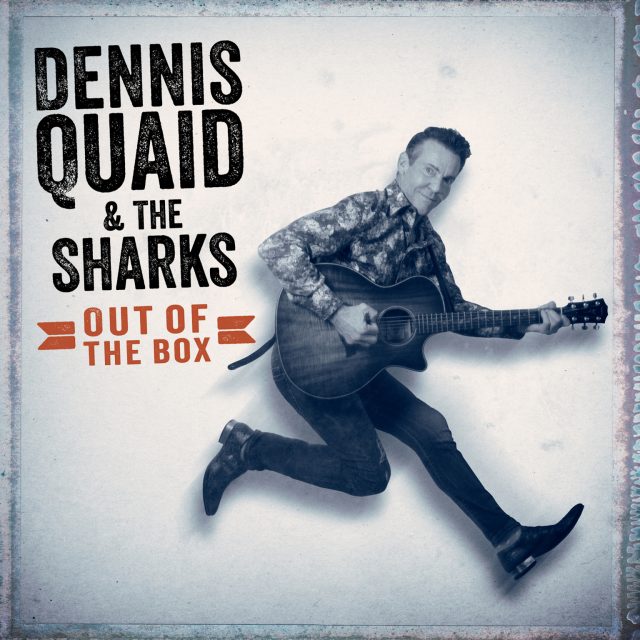 For my money, there are two sides to the dad-rock coin. First, there’s the music your father listens to and loves. That might include everything from The White Album to Black Flag, depending on your own particular pappy’s physical age, emotional maturity and pop-culture preferences. Second — and far more applicable to the topic and task at hand — there’s the music your dad plays (or would play if he were in a band). Obviously, this can also encompass everything from pop to punk for the same reasons above. But I would respectfully posit that Dennis Quaid (yes, the actor) and his long-serving Sharks are perhaps the perfect embodiment of a dad-rock band. They’ve been together for nearly 20 years, but Out Of The Box is their first album. It features the same sort of four-chord, blues-based guitar-rockers penned and played by every two-bit bar band around the world. Quaid can carry a tune OK — even though he once played Jerry Lee Lewis, he sounds more like John Hiatt here — but he’s not giving Bruce Springsteen a run for his money or anything. His lyrics bounce between smirking, winking odes to fine women and bad boys, or sentimental fare about life, love and loss. They can all play their instruments well enough, and there’s at least one ringer in the bunch: Toronto native and former Kingbees singer-guitarist Jamie James, who does most of the heavy musical lifting and tosses in plenty of searing solos besides. They pad out their set with jammy covers of The Doors’ L.A. Woman and Riders on the Storm, Larry Williams’ Slow Down and Van Morrison’s Gloria. And even though they’ve been playing some of these songs for years, Quaid apparently still hasn’t learned all the lyrics (unless Jim Morrison actually meant to write “Take eight, nine lonely days” and “Sweet Emily will die” in Riders). In short, they’re exactly what your dad’s garage band would sound like. And act like. They’re not trying to be rock stars or fool anybody — including themselves. They’re just a bunch of old dudes who are good enough to play for beer on the weekend. And you should take them just as seriously. Which is to say: Lighten up. Don’t get all nitpicky. They’re really not all that bad, considering. So just cut them some slack and just let them have their fun. After all, they have to be back at work on Monday.