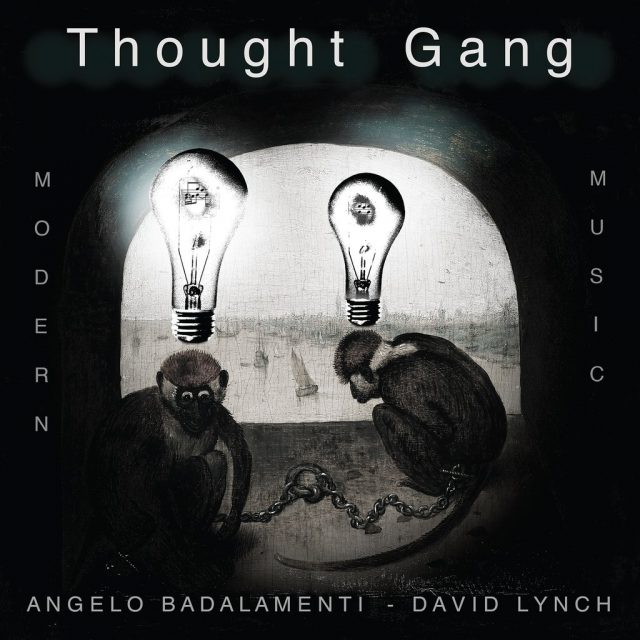 “I have no idea where this will lead us, but I have a definite feeling it will be a place both wonderful and strange.”

Special Agent Dale Cooper was talking about Twin Peaks‘ Owl Cave when he uttered those words. But he could just as easily have been discussing the self-titled debut album from odd-duck director David Lynch and his longtime composer Angelo Badalamenti‘s musical ensemble Thought Gang. As anyone vaguely familiar with their shared creative history could guess, this 13-song creation — most of which was apparently recorded in the early ’90s, but only recently completed — is more soundtrack than song collection. An hour-long fever dream of unsettling sonics, clattery free-jazz and bizarro spoke-word monologues reminiscent of Tom Waits at his most imperceptible, these tracks predictably stress mood over melody and tone over traditional songcraft. But don’t take my word — or even Cooper’s — for it: Here are some other Lynchian quotes that seem strangely applicable to the circumstances:

“Some thoughts have a certain sound, that being the equivalent to a form. Through sound and motion, you will be able to paralyze nerves, shatter bones, set fires, suffocate an enemy or burst his organs.” — Paul Atreides, Dune

“No hay banda! There is no band! Il n’est pas de orquestra! This is all … a tape-recording. No hay banda! And yet we hear a band. If we want to hear a clarinet … listen.” — Bondar, Lost Highway

“I hate slick and pretty things. I prefer mistakes and accidents.” — David Lynch

“The way your head works is God’s own private mystery.” — Sailor, Wild at Heart

“I can’t figure out if you’re a detective or a pervert.” — Sandy Williams, Blue Velvet

“You and me, mister… we can really out-ugly them sonafabitches. Can’t we?” — Mr. Eddy, Lost Highway

“What are you talking about?” — Henry, Eraserhead