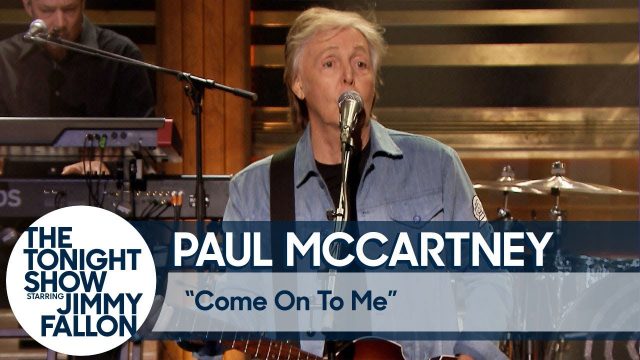 I finally got around to watching the XTC documentary This is Pop the other night. If you haven’t checked it out yet, I highly recommend it — it’s a comprehensive and revealing look at one of music’s more criminally underappreciated acts, anchored by revealing interviews with linchpins Andy Partridge and Colin Moulding. There’s even a hilarious Rick Wakeman cameo to boot. The reason it, um, popped into my head? This is pop also seemed to be the unspoken theme of Thursday’s late-night music lineup. First and foremost of course, the one and only Paul McCartney — you might remember him from some band called Wings — came on to The Tonight Show to clown around with Jimmy Fallon, freak out random strangers and debut the gently rocking Come On to Me, the singalong single from his brand-new album Egypt Station. Meanwhile, over on The Late Show With Stephen Colbert, sensitive boy Troye Sivan did double duty, pulling out two ’80s-inspired gems — the groovy Plum and the dramatic Animal — from his recent disc Bloom. On Late Night With Seth Meyers, Bebe Rexha kept the theme going (though less successfully, for my money) with the generic and generally forgettable I’m a Mess. If all that wasn’t enough pop, you can get more on Friday’s episode of Ellen when Cher hypes her new ABBA tribute Dancing Queen with a karaoke rendition of S.O.S. The only show bucking the trend was Jimmy Kimmel Live!, where Nathaniel Rateliff & The Night Sweats brought A Little Honey (and a lot of soul) to the outdoor stage with a two-song set. Let’s go to the video:

Albums Of The Week: Nathaniel Rateliff & The Night Sweats | The Future