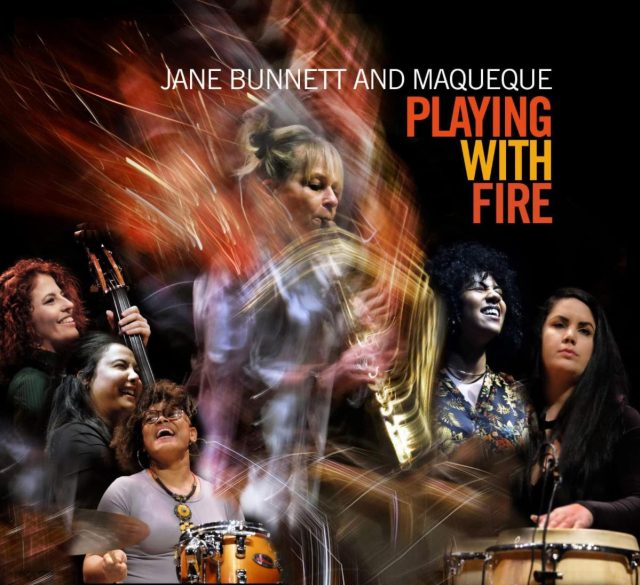 Playing With Fire could refer to the feeling emanating from any member of Maqueque, the band formed by veteran Toronto jazz musician Bunnett with young female grads of the Cuban conservatory.

A decade ago, Bunnett met the core of the band at a jam session with her band Spirits of Havana, at the Cohiba Hotel in that city. Ten years later, Maqueque has created opportunities for composing and performing extraordinary jazz that has taken the pioneering ensemble around the world. It has expanded to include not only women players from Cuba, but also the brilliant vocalist Joanna Majoko (from Zimbabwe) and musicians from the Dominican Republic, Latin America, Spain and Lebanon.

On Playing With Fire, much of the heat comes from new guitarist Donna Grantis. Donna, who also hails from Bunnett’s home of Toronto, performed for many years with Prince as a member of 3rdeyegirl in the 2010s. Three pieces in particular feature Donna’s contribution to the recording process: A God Unknown, A Human Race and Sierra.

Maqueque have won a Juno Award, been nominated for a Grammy and annually tour Europe, Latin America, the U.S. and Canada. Downbeat picked them as one of the Top 10 Touring Groups of 2019. NPR featured the band on Tiny Desk Concert. Maqueque have been wildly successful in their mission to elevate the profile of women musicians in Cuba. “There was so much creative energy there,” says Bunnett, “but not many outlets. We also realized that many of the girls at the conservatories were not really encouraged to ‘take the stage’ in a male-dominated scene. We witnessed this first-hand while taking technicians, jazz materials and instruments to Cuban conservatories — that the best way to solve this issue was to create a performance opportunity, which became an all-female ensemble.”

Maqueque continue to evolve and welcome new generations. Playing With Fire marks the debut of 19-year-old violinist Daniela Olano, sister of the band’s co-founder and pianist, Danae Olano. Her composition Daniela’s Theme is a highlight on the new recording. In addition to new compositions, the collective also reimagines two jazz classics: Tempus Fugit by pianist Bud Powell and Jump Monk by Charles Mingus.

Playing With Fire is the first Maqueque album to feature vocalist Joanna Majoko. The Zimbabwean took the music to new heights, improvising with a creative power in the studio that inspired everyone. The electrifying rhythm section — including the two founding members, pianist Olano and drummer Yissy Garcia, along with bassist Tailin Marrero (who wrote the track Bolero) and percussionist Mary Paz — is the foundation that the music is built upon.

Watch a promo video above, pre-order the album HERE and hear more from Jane Bunnett below.