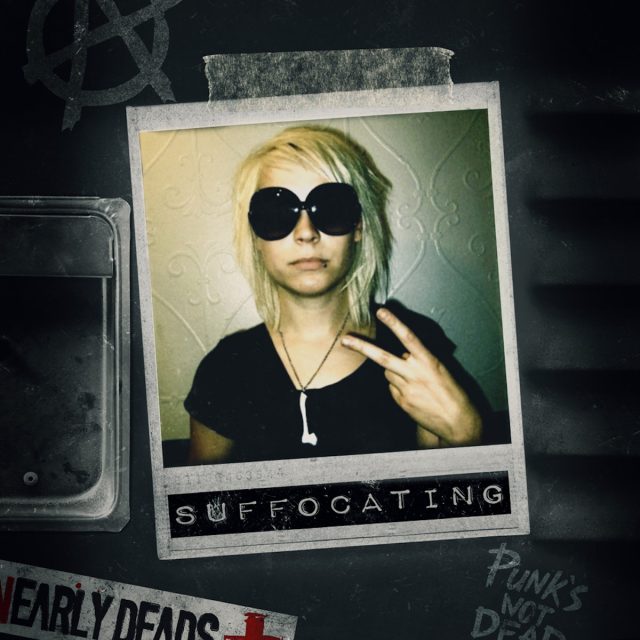 The Nearly Deads roar back to life with their breathless new single Suffocating — premiering exclusively on Tinnitist.

The second preview of the American alt-rockers’ upcoming sophomore album We Are The Nearly Deads, Suffocating hits the ground sprinting and never looks back. Propelled by hard-charging drums and fuelled by guitars that toggle between rugged low-neck riffage, chiming licks and clanging chords that bounce from side to side, the turbocharged track jams more energy and creativity into 3:23 than some bands fit into entire albums. But it still doesn’t overshadow singer Theresa Jeane’s soaring powerhouse vocals and revealing lyrics about self-down and interpersonal struggles:

“I’ve been losing control
Of everything in me
Wish my mind would let me be, and set me free
I’ve been finding something I never knew I lost
My grip on reality — can’t you see?”

“We can’t always be 100% positive all the time,” she explains. “Sometimes, it feels like you can’t even keep your head above water. That’s what Suffocating is about. Those real, honest moments where you feel like everyone around you believes in you but you just can’t get yourself to see it. We want to show people that it’s OK to struggle and to feel these emotions. It’s part of being human, and especially part of being creative. There will always be self doubt. Not every song will be a fist-pumping anthem to overcoming your fears, sometimes we need songs about the fears themselves. We want to let people know that at any stage, any age, any time of your life, that it’s OK to still be searching.”

The quartet — which also features guitarists Steven Tobi and Javier Garza Jr. and drummer Josh Perrone — first gained attention with the playful-yet-powerful Never Look Back, and its 10-million strong zombie-laced video. The kinetic energy of the song provided an apt soundtrack to the exhilarating catharsis of out-running the walking dead, both literally and figuratively.

Running is in their blood. Over the past decade, The Nearly Deads have traversed the U.S. with the likes of In This Moment, Butcher Babies, Stitched Up Heart and It Lives, It Breathes, while playing shows with Halestorm, Icon For Hire, The Dead Deads, Kaleido and The All-American Rejects, among many others.

Buoyed by the passionate support of ZombieNation, their global legion of fans, the group’s sophomore album is the eagerly anticipated followup to their critically acclaimed debut Invisible Tonight, dubbed “A nifty mix of Paramore and Katy Perry” — though you can also hear some Billy Talent in the mix.

We Are The Nearly Deads (due spring ’23) will fully showcases the depth and breadth of the band with all four members co-writing the material. To exemplify this, the first four singles allows each member to bring their influences and creative vision to the forefront while also sharing a teenage photo of themselves as each single’s artwork. To give fans early access to artwork, new music and behind-the-scenes exclusives, the band launched a special ZombieNation Patreon.

Between full-lengths, they have continued to churn out anthem and earworms. Notable highlights include Freakshow, My Evil Ways, Can’t Make You Change, their Unearthed EP and their previous single Relentless, which blasted through the web like a cannon.