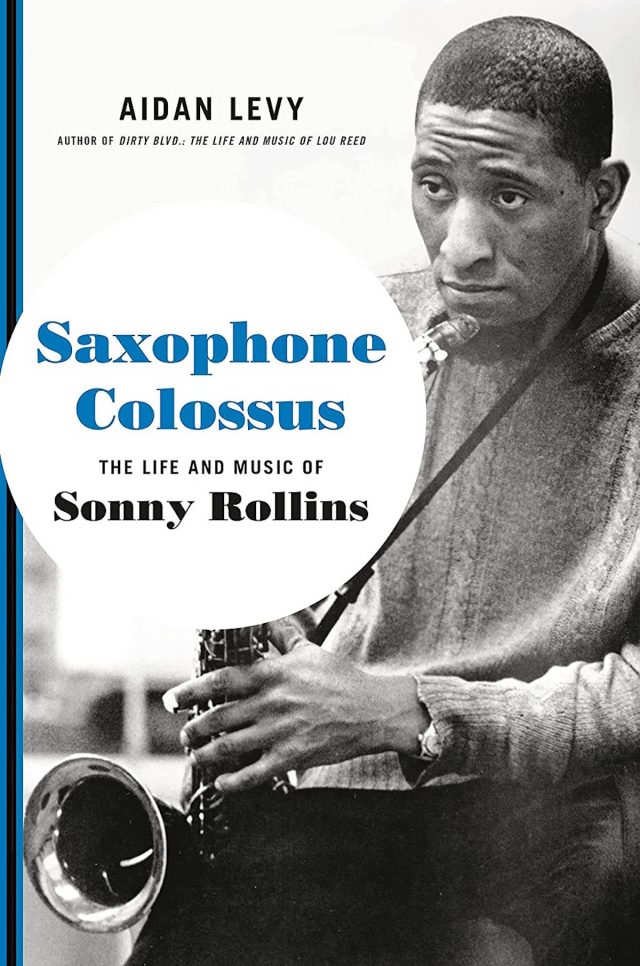 Sonny and Lenny. Mac and metal. Listening parties and London jazz. And the history and mystery behind a bunch of big hits. That all she wrote this week: 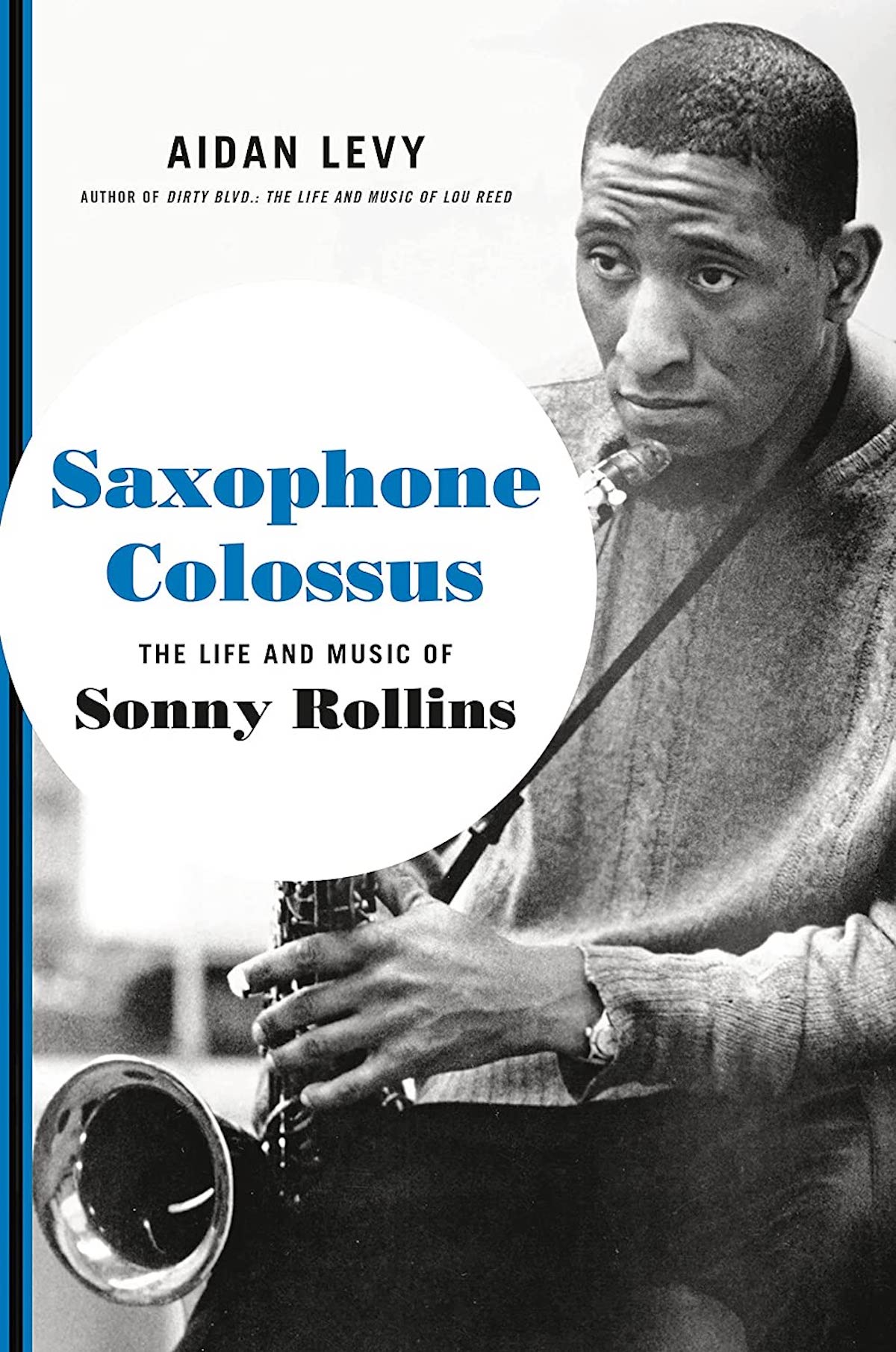 Saxophone Colossus: The Life and Music of Sonny Rollins
By Aidan Levy

THE EDITED PRESS RELEASE: “Sonny Rollins has long been considered an enigma. Known as the ‘Saxophone Colossus,’ he is widely acknowledged as one of the greatest jazz improvisers of all time, winning Grammys, the Austrian Cross of Honor, Sweden’s Polar Music Prize and a National Medal of Arts. A bridge from bebop to the avant-garde, he is a lasting link to the golden age of jazz, pictured in the iconic Great Day in Harlem portrait. His seven-decade career has been well documented, but the backstage life of the man once called “the only jazz recluse” has gone largely untold — until now. Based on more than 200 interviews with Rollins himself, family members, friends, and collaborators, as well as Rollins’ extensive personal archive, Saxophone Colossus is the comprehensive portrait of this legendary saxophonist and composer, civil rights activist and environmentalist. The story of Rollins — innovative, unpredictable, larger than life — is the story of jazz itself, and Sonny’s own narrative is as timeless and timely as the art form he represents. Part jazz oral history told in the musicians’ own words, part chronicle of one man’s quest for social justice and spiritual enlightenment, this is the definitive biography of one of the most enduring and influential artists in jazz and American history.” 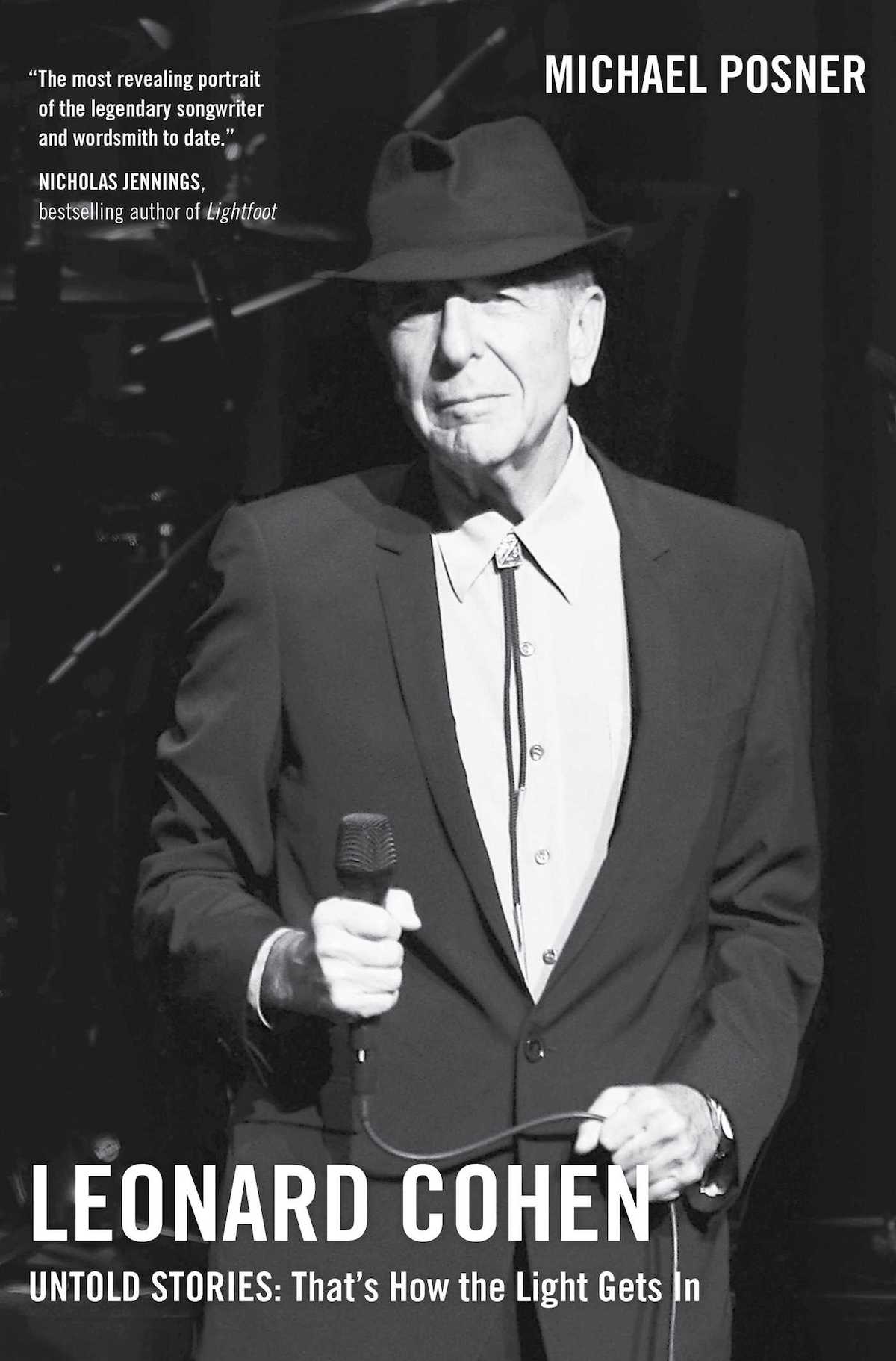 Leonard Cohen, Untold Stories: That’s How the Light Gets In, Volume 3 (Volume 3)
By Michael Posner

THE EDITED PRESS RELEASE: “Poet, novelist, singer-songwriter, artist, prophet, icon — there has never been a figure like Leonard Cohen. He was a true giant in contemporary western culture, entertaining and inspiring the world with his work. From his groundbreaking and bestselling novels The Favourite Game and Beautiful Losers, to timeless songs such as Suzanne, Dance Me to the End of Love and Hallelujah, Cohen is one of the world’s most cherished artists. His death in 2016 was felt around the world by the many fans and followers who would miss his warmth, humour, intellect, and piercing insights. Leonard Cohen, Untold Stories chronicles the full breadth of his extraordinary life. This third and final volume in biographer Michael Posner’s sweeping series of Cohen’s life — That’s How the Light Gets In — explores the last 30 years of his life, from the late 1980s revival of his music career to his final months spent fighting debilitating disease while still creating three new studio albums. Cohen’s story is told through the voices of those who knew him best — family and friends, colleagues and contemporaries, business partners and lovers. This is a book like no other, about a man like no other.” 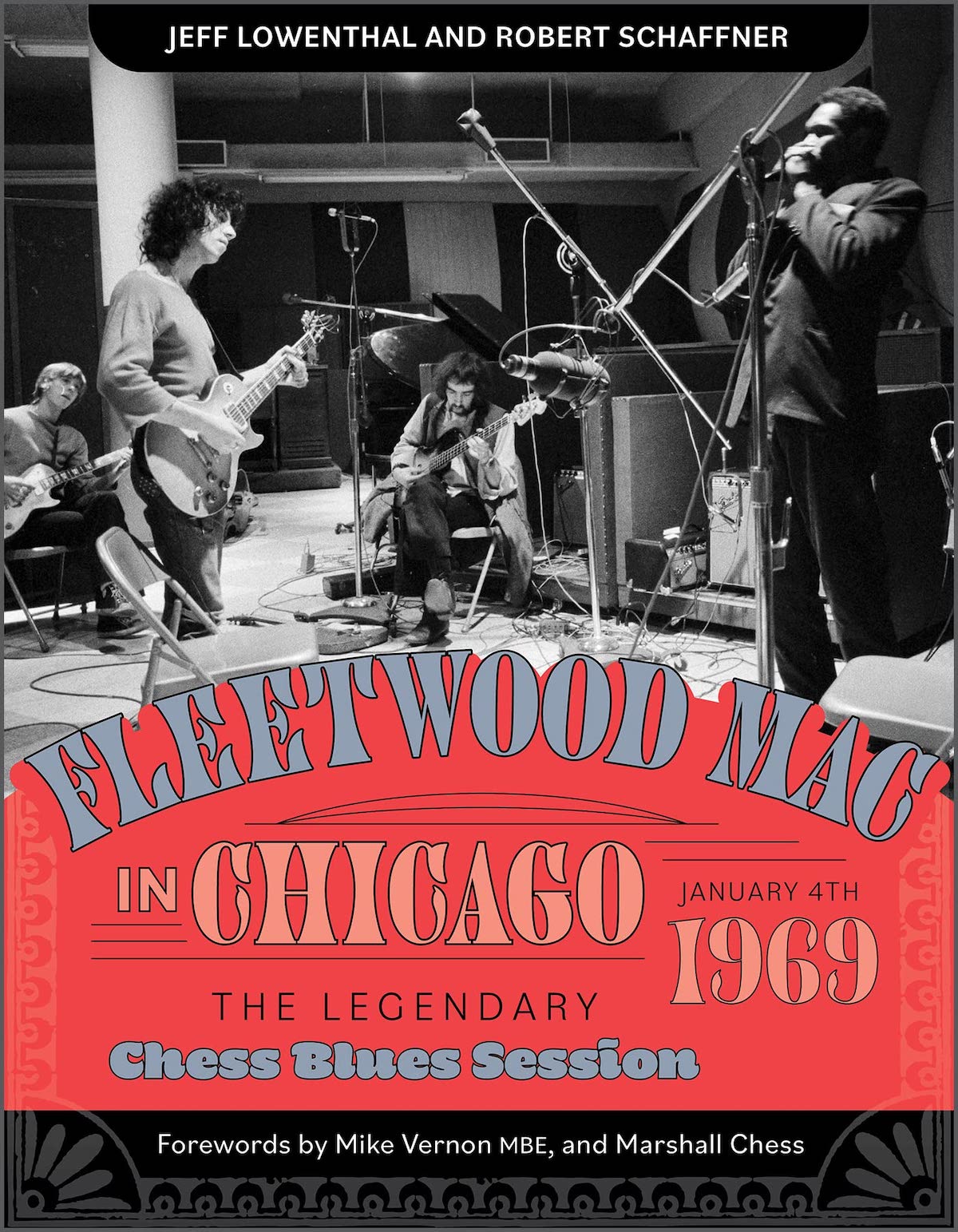 THE EDITED PRESS RELEASE: “Taken by the only photographer present, some of these photos were originally shown on the first release of the album recorded that day: Fleetwood Mac in Chicago. Now, for the first time, all of the color and black-and-white shots from that day are presented in one collection, including many that have never before been published. Along with founding Fleetwood Mac members Peter Green, Danny Kirwan, Jeremy Spencer, Mick Fleetwood, and John McVie, the major Chicago blues musicians featured at the session, including Willie Dixon, Otis Spann and Buddy Guy, are shown in high-quality images, created directly from the author’s original negatives. Forewords by both producers present at the session — Mike Vernon MBE, and Marshall Chess — provide the setting for the music created that day. Also featured throughout the book are recollections by many of Fleetwood Mac’s contemporaries, such as Kim Simmonds, Aynsley Dunbar and Martin Barre, as well as a new interview with Guy. The resulting volume is sure to be a must-have that belongs on every fan’s and collector’s bookshelf.” 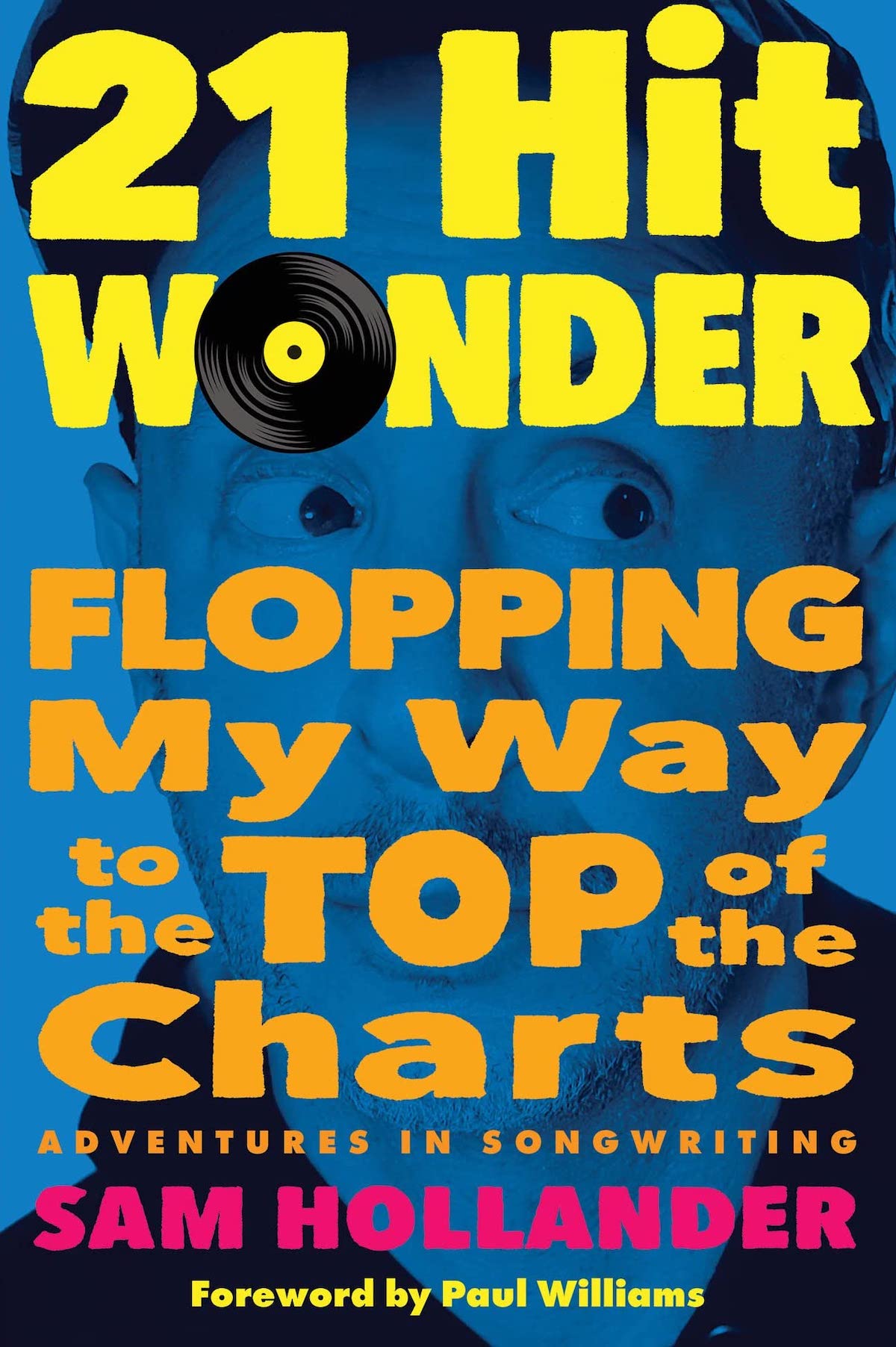 21-Hit Wonder: Flopping My Way to the Top of the Charts
By Sam Hollander

THE EDITED PRESS RELEASE: “As one of the most renowned, multi-platinum songwriters and producers in the game, Sam Hollander has written and produced for the likes of Panic! At The Disco, One Direction, Katy Perry, Ringo Starr, Def Leppard, Carole King, Weezer, Blink-182, Jewel, Train, Fitz and the Tantrums, Billy Idol, Tom Morello and many others. But before he was stacking Billboard hits, Hollander was piling up calamitous flops, false starts, and feeling like the world was moving on and up without him while he spun in place. Today he wears that decade of misses like a badge of honor. In 21-Hit Wonder, he’s collected anecdotes from his wild music industry rollercoaster ride to help aspiring songwriters and other creatives learn about survival, endurance, scheming, hustle, and the importance of laughing even on the worst days of the journey. Music lovers spanning generations and genres will find stories about many of their heroes and industry icons. 21-Hit Wonder is one part chronicle of a songwriter’s storied career and another part love letter to anyone who has been counted out — from no-hit wonders and one-hit wonders to the novelties and the never-beens — and just needs a bit of inspiration to persevere. Sam’s inspiring story is proof that setbacks are just steps on the road to success.” 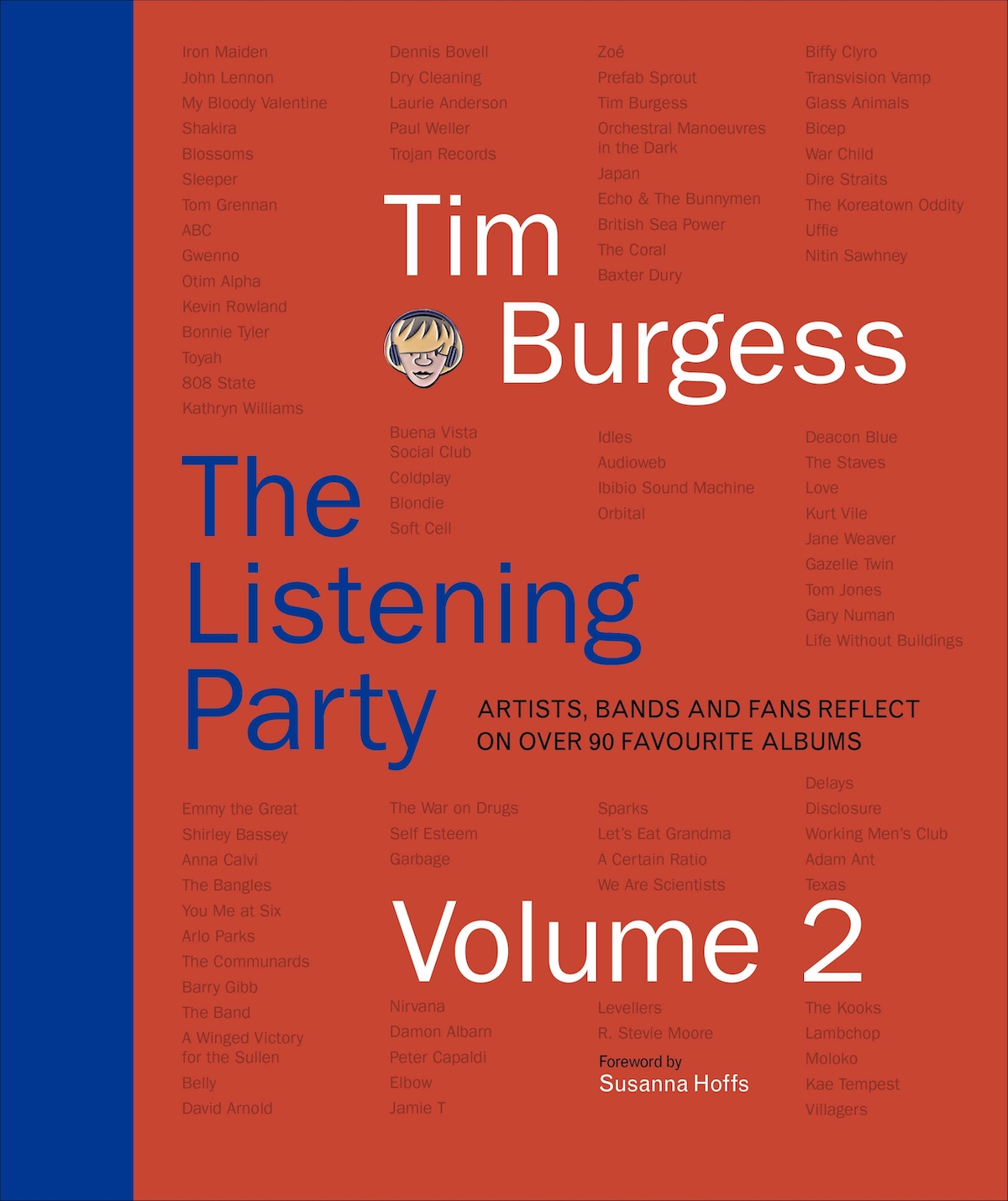 The Listening Party Volume 2: Artists, Bands and Fans Reflect on Over 90 Favorite Albums
By Tim Burgess

THE EDITED PRESS RELEASE: “In less than two years, tens of thousands of music lovers have pressed play at the same time as legendary musicians to share the communal experience of a listening party. Over 1,000 online events, fans and artists — from Paul McCartney to Blondie, Joy Division to Iron Maiden — have shared insightful recollections, intimate conversations and behind-the-scenes revelations. This followup to the bestselling The Listening Party Volume 1 gathers together over 90 more of the most essential parties and celebrates the unique power of a listening party to connect music creators with listeners. It’s an appropriate tribute to the unifying power of music and how it continues to enthrall millions around the world every single day.” 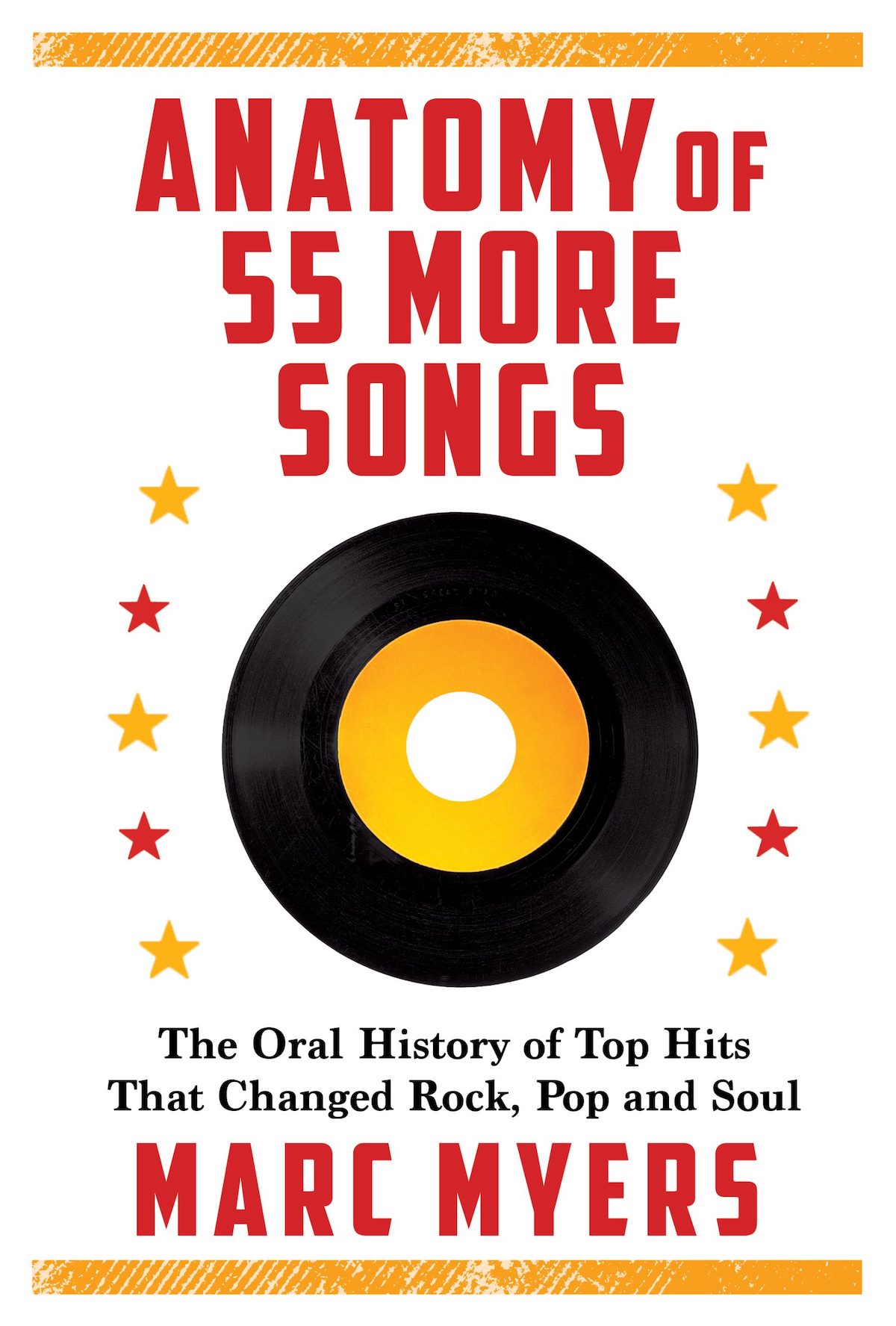 Anatomy of 55 More Songs: The Oral History of 55 Hits That Changed Rock, R&B, and Soul
By Marc Myers

THE EDITED PRESS RELEASE: “Songs that sell the most copies become hits, but some of those hits become something more — iconic recordings that not only inspire a generation but also change the direction of music. In Anatomy of 55 More Songs, based on his column for the Wall Street Journal, music journalist and historian Marc Myers tells the story behind 55 rock, pop, R&B, country, and soul-gospel hits through intimate interviews with the artists who wrote and recorded them. Part oral history, part musical analysis, Anatomy of 55 More Songs ranges from Creedence Clearwater Revival’s Bad Moon Rising to Dionne Warwick’s Walk On By, The Beach Boys’ Good Vibrations, and Black Sabbath’s Paranoid. Bernie Taupin recalls how he wrote the lyrics to Elton John’s Rocket Man; Joan Jett remembers channeling her rage against how she had been unfairly labeled and treated as a female rocker into Bad Reputation; and Ozzy Osbourne, Elvis Costello, Bob Weir, Sheryl Crow, Alice Cooper, Roberta Flack, John Mellencamp, Keith Richards, Carly Simon and many others reveal the emotions and technique behind their major works. Through an absorbing chronological, song-by-song analysis of the most memorable post-war hits, Anatomy of 55 More Songs provides a sweeping look at the evolution of pop music between 1964 and today. This book will change how you listen to music and evaluate the artists who create it.” 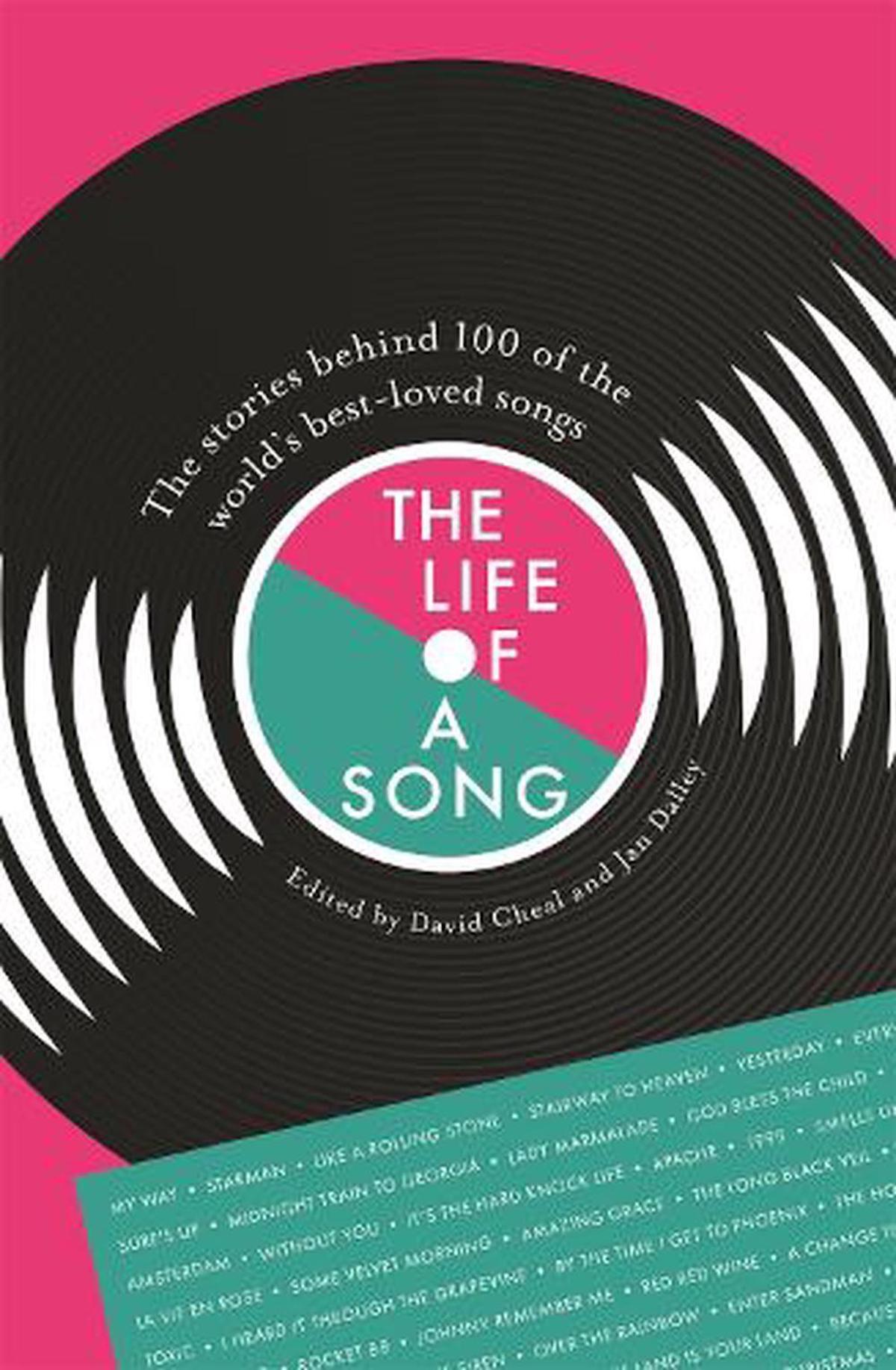 Life of A Song: Volumes 1 and 2
By Jan Dalley & David Cheal

THE EDITED PRESS RELEASE: “Discover the stories behind the songs The Life Of A Song contains the stories of 100 songs exploring each song’s biography and how they took on a new life following their release. Packed with intriguing factoids, these bite-sized essays will delight music fans and send you scurrying back to listen to the songs in all their beauty and mystery. Who knew that Paul McCartney originally referred to Yesterday as Scrambled Eggs because he couldn’t think of any lyrics for his heart-breaking tune? Or that Patti LaBelle didn’t know what ‘Voulez-vous coucher avec moi ce soir?’ actually meant? These and countless other back stories fill this book. Each 600-word piece gives a mini-biography of a single song, from its earliest form through the various covers and changes, often morphing from one genre to another, always focusing on the ‘biography’ of the song itself while including the many famous artists who have performed or recorded it. This book collects 100 of the best pieces from the highly successful The Life Of A Song column. Inside you’ll find rock, pop, folk, jazz and more. Each piece is pithy, sparkily written, knowledgeable, entertaining, full of anecdotes and surprises. They combine deep musical knowledge with the vivid background of the performers and musicians, and of course the often intriguing social and political background against which the songs were created.” 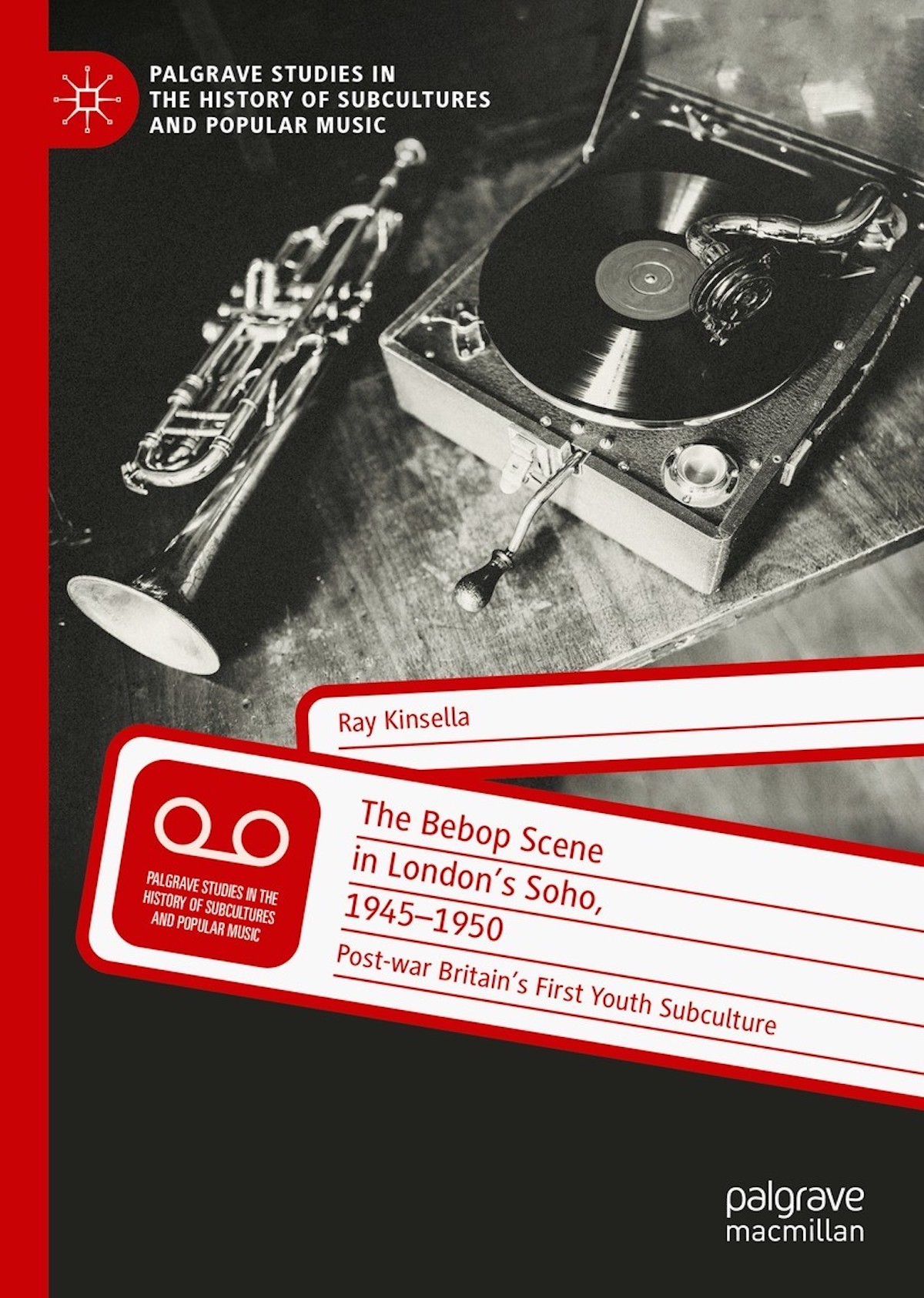 THE EDITED PRESS RELEASE: “This is the first book to tell the story of the bebop subculture in London’s Soho, a subculture that emerged in 1945 and reached its pinnacle in 1950. In an exploration via the intersections of race, class and gender, it shows how bebop identities were constructed and articulated. Combining a wide range of archival research and theory, the book evocatively demonstrates how the scene evolved in Soho’s clubs, the fashion that formed around the music, drug usage amongst a contingent of the group, and the moral panic which led to the police raids on the clubs between 1947 and 1950. Thereafter it maps the changes in popular culture in Soho during the 1950s, and argues that the bebop story is an important precedent to the institutional harassment of black-related spaces and culture that continued in the 20th and 21st centuries. This book therefore rewrites the first chapter of the ‘classic’ subcultural canon, and resets the subcultural clock; requiring us to rethink the periodization and social make-up of British post-war youth subcultures.” 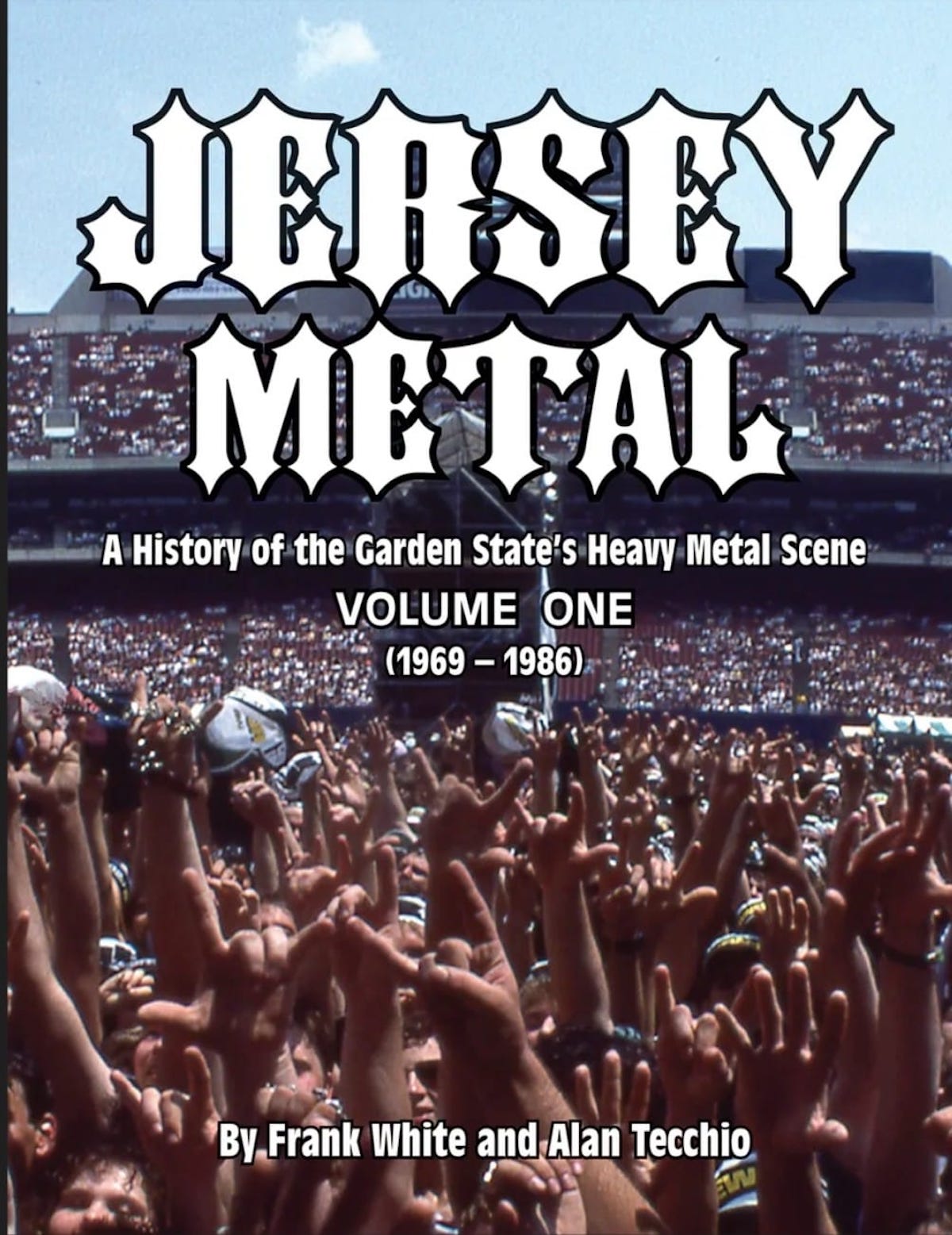 THE EDITED PRESS RELEASE: “In Jersey Metal, Frank White and Alan Tecchio team up to offer a unique, autobiographical perspective on New Jersey’s heavy metal music history through photos, ads, interviews and band bios. Jersey Metal Volume One covers the early years from 1969 through 1986. The book focuses not just on artists and bands from the Garden State but also world-wide acts, local original, cover as well as tribute bands that played New Jersey. There is also respect paid to the venues these groups frequented, the radio stations, record companies, stores and the Jersey shore that all helped grow New Jersey’s wild heavy metal scene.”